Thanks for Nothing, Bitches 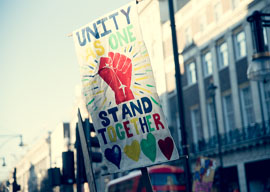 Women rarely fail to let me down.

There’s a Roz Chast cartoon showing one lady shouting at another: “The price of Kleenex WAS SO 47 cents in 1963!” That sentence approximates roughly 86% of the “conversations” I”ve had with (or overheard being conducted by) other females over the span of my 52 years.

Here I thought my column would write itself this week: A bunch of dumb broads were plotting an anti-Trump demo in Washington that, like all the other “Million Something Marches,” would surely wind up being just a handful of jerks standing around stupidly screaming for a few hours. And then I”d make fun of them (and their unfunny, semiotically askew, pink knitted “pussy hats”) for 800 words.

(Seriously, what do those hats mean? “I dare Trump to “grab” the fuchsia, cat-eared wool vagina on my head”?)

Well, thanks for (almost) nothing, bitches. Because startlingly (especially considering the pre-march “intersectional feminist catfighting” reported by our own Jim Goad), a few hundred thousand protesters really, truly turned up for the #WomensMarch in D.C., and at “sister” rallies across the apparently suckier parts of the planet.

How? Everyone knows that most women are generally lackadaisical and incompetent. (As blogger Kate McMillan likes to say, “If women ran the world, we”d still be living in caves”but with really, really fancy curtains.”)

“I had to pivot from gloating about puny attendance to collecting evidence of the marchers” idiocy.”

Then I realized: One thing women are good at is organizing get-togethers with other women. Every cubicle job I”ve ever had consisted of almost daily bridal and baby and birthday parties, and the all-important “going for lunch,” occasionally punctuated by work.

So I had to pivot from gloating about puny attendance to collecting evidence of the marchers” idiocy, which, of course, proved laughably easy.

If asked to choose a “favorite” picket sign from the oh-so-many left littering the scene, I”d have to go with the unfathomable “Make Them Pay for Razors if We Pay for Tampons.”

(A close second? This guy’s “Don”t Grab Women by the Pussy”That’s Where Babies Come From!” is currently tied with “Cinnamon Rolls Not Gender Roles,” but I”m open to suggestions (with hyperlinks) for runners-up in the comments.

Prizewinning reaction from our side? No contest”the ubiquitous:

Trump got more fat women to walk today than Michelle Obama did in eight years.

Reporter Faith Goldy of the right-wing TheRebel.media braved the veritable sea of avoirdupois and lanugo at the D.C. march and punked the crowd royally.

Goldy asked marchers if the president-rapist of Juanita Broaddrick should be impeached, and they all said yes. Of course, said rapist is (“allegedly”) Bill Clinton, not Donald Trump, but, well, how are these poor dumb females and their beta-male drones supposed to know that…?

She fared better than another Rebel journalist, Sheila Gunn Reid, who covered the Edmonton, Alberta, rally and got hit in the face, by a right-on, left-wing, feminist man (who looks exactly like you”re picturing him right this very minute). But of course. Like I always say: “No neocon ever called me “baby.””

Mainstream reporters survived unscathed, naturally, unless having to write stuff like this qualifies as a variety of mental torture:

At such a young age, Norman’s daughter doesn”t understand a whole lot about American politics, but her mother wants her to remember Saturday as a day where she stood on the right side of history. Norman also has a four-year-old daughter.

On election night, she and her daughters made cupcakes with the promise to eat them if Hillary Clinton won the next morning. When that didn”t happen, Norman explained to her girls that sometimes life isn”t fair.