That Bloodbath in the Old Dominion 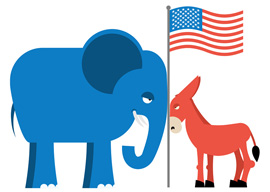 The day after his “Silent Majority” speech on Nov. 3, 1969, calling on Americans to stand with him for peace with honor in Vietnam, Richard Nixon’s GOP captured the governorships of Virginia and New Jersey.

By December, Nixon had reached 68 percent approval in the Gallup Poll, though, a year earlier, he had won but 43 percent of the vote.

Where Trump won 46 percent of the vote against Hillary Clinton, his approval rating is now nearly 10 points below that. He has less support today than on the day he was elected, or inaugurated.

There is no way to spin Tuesday as other than a Little Bighorn, and possible harbinger of what is to come.

In the rural counties, however, Republican Ed Gillespie rolled up the landslides.

“Republicans should recall that off-year elections are often problematic for incumbent parties.”

Consider. Of all the delegate seats in the Virginia assembly allocated to Alexandria, Arlington, Fairfax, Loudoun and Prince William counties, the GOP can today claim only one.

Northern Virginia is taking on the political and socioeconomic profile of San Francisco.

Another and perhaps insoluble problem for the GOP, not only in the Old Dominion, is demography.

Democrats rolled up their largest margins among African-Americans, Hispanics, single women, immigrants and the young. And these voting blocs are growing.

Gillespie ran up his largest margins among white males near and past retirement age and married white women. These Middle Americans are in inexorable demographic decline.

The Greatest Generation is passing on, and baby boomers born between 1946 and 1951 are now on Medicare and Social Security.

Yet reports of the GOP’s demise are grossly exaggerated.

Though Gillespie lost by nine points, Jill Vogel, who ran for lieutenant governor on Trumpian issues, lost by six.

By 2-1, Virginians do not want their Confederate monuments torn down. Northam, sensing this, moved toward Gillespie’s position as the campaign went on. Also, among the 27 percent of Virginians who regarded taxes and immigration as the top issues, Gillespie won by nearly 4-1.

It was health care concerns, the No. 1 issue, that buried the GOP.

As for mainstream media rage and revulsion at the “racism” of Gillespie ads suggesting Northam supported sanctuary cities and was soft on the MS-13 gang, this reflects an abiding establishment fear of the Trumpian issues of illegal immigration and crime.

Then there was the Republican messenger.

A former chairman of the RNC, Washington lobbyist and White House aide, Gillespie is an establishment Republican unconvincing in the role of a fighting populist conservative. His speeches recalled not Trump’s run, but that of the Republicans Trump trounced.