The Chinks in Our Armor 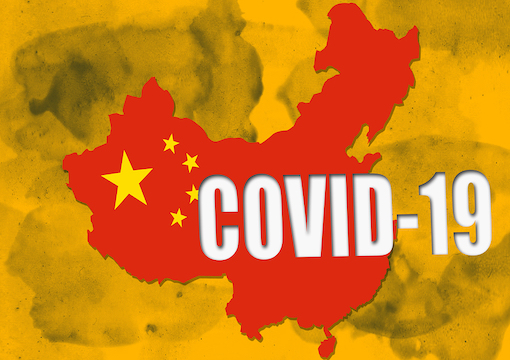 If you can spare a few minutes from killing Chinese and the elderly, could you please have a go at the morons in my neighborhood who were swarming the grocery store at 6 a.m. yesterday cleaning out the toilet paper and water? If you could thin that herd, I’d greatly appreciate it.

P.S. I’m not saying lay off the Chinese.

Stores with empty shelves. Lines around the block at supermarkets. And Amazon—the behemoth, the “future of retail”—has suspended grocery deliveries, its stocks depleted. The current hysteria, along with proving us morons, has also shown many of us to be liars. No one acted this way when Trump was elected. We were told that Trump was going to build concentration camps and start a nuclear war and erect a fascist police state, yet funny how nobody on the left hoarded toilet paper and water. They were playacting at being scared. No one actually thought Trump would bring Armageddon.

Today, we’re seeing what America becomes when there’s genuine fear. All of a sudden Bernie Sanders’ comment about how “lining up for food is a good thing” seems a bit less endearing, because for a lot of Americans, it’s become reality.

Along with ginning up a panic, leftists are tackling Wuhanvirus by following what I call the “Dr. Acer method of disease management.” Dr. David Acer was the queer dentist who, back in the 1980s, was pissed that only gay men were contracting AIDS, so he took it upon himself to give AIDS to his straight patients, so that homos could bray about how “it’s not just a gay disease, sweetie.” Acer aced his plan, infecting a grandma, a teen, and nearly a half-dozen others before dying of the disease himself. But the plan went sideways when Republicans used the Acer incident to call for HIV testing for medical professionals. Overnight, the gay lobby reversed itself and decided that Acer’s glorious accomplishments must now be forgotten. Anyone who mentioned Acer as the origin of the mini-epidemic that spread through his office was derided as a homophobe by the lobby’s rentboys in the press.

This is the playbook leftists are using for Wuhanvirus. First, they fought against travel bans. It was important that non-Asians be infected, to show that “it’s not just a Chinese disease (sweetie).” Then, once non-Asians began getting sick, it became “racist” to mention the virus’ origin.

Domestically, Wuhanvirus is a symphony of stupidity. Cretins are waiting in hours-long lines and crushing against one another mosh-pit-style in crowded stores to hoard products that are only scarce because of the panic buying, which is only occurring because people are spooked by a disease that can be caught by crushing against each other mosh-pit-style in crowded stores.

And as Americans do the Rain Man dance, the Chinese are watching with amusement.

Back in frontier days, we used to call the Chinese “inscrutable.” How times have changed. In terms of grand design, the Chinese are arguably the easiest to read of all the players on the world stage today: They want to dominate, and they seek advantage wherever and however they can. Just like the Chinese dealers in Vegas who’ve pretty much cornered the job market in the casinos, they know our tells, they exploit our weaknesses, and their cold expressionless eyes can read our big plaintive ones like a book.

It’s an amusing irony that the Chinese are so obsessed with finding the chinks in our armor…not that we hide them terribly well anyway (more on that shortly).

There’s a lot of suspicion on the right at the moment that Wuhanvirus is a bioweapon that was cooked up in a lab, but that kind of talk plays right into the hands of the Chinese, as it obscures the fact that Wuhanvirus was totally predictable (and thus avoidable). As the AP flatly stated in 2004, “Most flu strains start in China.” This is a simple fact. But now, because apparently reality’s not exciting enough, a lot of MAGA types are acting like it’s somehow suspicious that a virus came from China (next you’ll tell me that a koala came from Australia!).

“Domestically, Wuhanvirus is a symphony of stupidity.”

“For much of the past century, Asia has been the cradle of influenza, including two of the three major human flu pandemics,” the AP reported sixteen years ago. “80% of the new human flu strains the last few decades appeared in China.” The scientists interviewed by the AP agreed on one very important central point: China is a flu breeding ground because of its customs regarding animal consumption and storage.

Claiming Wuhanvirus escaped from a lab lets the Chinese off the hook. They’ve had warning after warning that their customs and cuisine could kill us all. Three years ago, Smithsonian magazine ran an article that asked, “Is China ground zero for a future pandemic?” and the answer was yes. Smithsonian concluded that China is the likely source of the next major global pandemic, and again, the scientists were unanimous as to why: the animal cuisine and the country’s barbaric “wet markets” (for the record, the Smithsonian piece was written by a Chinawoman who was Newsweek’s Beijing bureau chief).

Speculating about lab-created germ warfare not only erases Chinese cultural culpability, it also encourages panic buying by reinforcing the myth that Wuhanvirus is more than a flu. People are hoarding like it’s the end of days because they’ve been led to believe that the world is facing something unprecedented. It isn’t. Wuhanvirus is a flu strain; it’s most deadly to the old and infirm, and it can be fought off with standard anti-flu precautions. Wuhanvirus is not a superbug, and its origin is no surprise.

At this point, no matter how Wuhanvirus pans out casualty-wise, it will definitely hurt our economy and possibly sway our election. And the Chinese are doing everything they can to divert attention from the virus’ origin. It’s ironic that certain MAGA types seem intent on helping them (give rightists a colorful conspiratorial story to explain the mundane, and they’ll take to it like flies on pupu every time).

Responsibility for Wuhanvirus is on the entire Chinese nation. The government could have easily bullied its people into abandoning their reckless animal customs (I mean, hell, the CCP damn near bullies the citizenry about everything else), and the Chinese citizens, having birthed new flu after new flu, could have taken it upon themselves to change their ways.

So why didn’t they? For a nation so concerned with international trade, especially with the U.S., why the cavalier attitude when it comes to gifting the world with new diseases?

Because, as I mentioned earlier, the Chinese have learned our weaknesses.

Remember Michael Posner? Of course you don’t. Michael Posner is a villain who “got away with it,” who helped fuck up the world with zero personal repercussions. These days, Posner teaches at New York’s Stern School of Business, but back in 2009 he was Obama’s Assistant Secretary of State for Democracy, Human Rights, and Labor, and it was in this role that he forged the U.S.’s approach to China for the next eight years. Posner held a meeting with the Chinese in 2010 to tell them that the U.S. was in no position to judge Chinese behavior, because American opposition to illegal immigration (exemplified at the time by Arizona’s SB 1070) was so heinous, so “troubling,” that our “xenophobia” had robbed us of the right to judge China’s actions. To atone for Arizona’s immigration law, we told the Chinese that we’d butt out of their affairs.

So what did China take away from that meeting? The message was clear: The State Department is filled with boobs who are so troubled by attempts to control the American border that they’re driven to apologize to, and prostrate themselves before, nonwhite nations, even to the extent of turning a blind eye to the harm those nations do domestically and abroad.

“As long as America is filled with racists and xenophobes, you have free rein to misbehave, China!”

So the Chinese did as they pleased during Obama’s tenure. And when Trump was elected with a mandate to essentially replicate SB 1070 on a national scale, the Chinese didn’t forget the insight they gained via Posner: If SB 1070 motivated the American foreign policy establishment to go easy on China, Trump’s election would similarly motivate those same people to an even greater degree. Trump can bluster at China all he wants; behind him is an infrastructure crawling with traitors who feel compelled to bow before totalitarian nonwhite regimes as “reparations” for the fact that American voters oppose open borders.

Michael Posner believed that China would respond to U.S. submissiveness and self-effacement with compromise and self-improvement. This man shouldn’t be a professor; in a perfect world, he’d be in a stockade getting pelted with dung. But no…these days, Posner continues to influence China policy as an academic and op-ed author, and even establishment Republicans have come to embrace him. Last October, Sen. Marco Rubio praised Posner’s “expertise” on China during a hearing on Capitol Hill.

Meanwhile, China has activated its fourth column of American Posners. Democrats, globalist Republicans, big business, and the vermin in the media have been mobilized to run interference for China on Wuhanvirus. And as the press vomits up story after story about how the Chinese are the real victims and the true heroes, and as the entire left pushes for national amnesia regarding the outbreak’s origin, the Chinese are keenly observing just how little it takes for this country to fall to panic, shortages, closures, and lockdown.

Wisdom and goodness to the vile seem vile; Filths savour but themselves. Albany says that to Goneril in King Lear. If you approach the vile with wisdom and goodness, they will view you with nothing but contempt. And the fact that American politicians and business leaders refuse to heed Shakespeare’s words guarantees that when Wuhanvirus eventually ebbs, a new made-in-China disease will be right around the corner, because the only thing the Chinese have learned from this episode is that not only will our self-flagellating Michael Posners always come to their rescue, but the American people can be driven to hoarding, hysteria, and anarchy with surprising ease. Forget disruptions in the international supply chain; we’ve shown that we can disrupt our domestic supply chain with vigor and blind stupidity. We’ve put ourselves under siege from ourselves, all because we think there’s a doomsday bug at our gates.

So make no mistake—the filths in China are savouring the moment. They’ve seen what truly scares us, and it’s something they didn’t even do on purpose.