The Cockroaches of Abortion 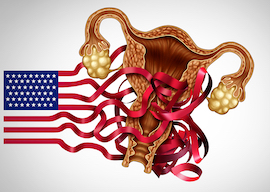 1987’s Twilight of the Cockroaches is one of my favorite Japanese films. It’s half live action (the human characters) and half animation (the roaches). The premise is simple. A male slob lives in an apartment crawling with cockroaches. They eat the food dropped on the floor, and the leftovers on the unwashed dishes. They’re well-fed, and never threatened by a stomping boot. It’s a good life, and they’ve grown fat and complacent.

The guy’s neighbor is a pretty young woman who is fastidiously clean. She doesn’t tolerate dirt, and she especially doesn’t tolerate cockroaches. Any roach she sees, she kills. The roaches in her apartment have formed a fascistic, militaristic society. Hard-hearted martinets in an environment where food is scarce, they survive through discipline and strategy.

The dude and the girl fall in love, but she insists that he clean up his sty of an apartment as proof that he can change his slovenly ways. Needless to say, his roaches find themselves completely unprepared for the sudden threat. They’ve gone soft, and they get slaughtered.

The pro-choice movement is facing an existential crisis. It’s genuinely possible (though, in my opinion, hardly assured) that Roe might be severely weakened or even overturned when one of those current “ban all abortions and the forceps they rode in on” scorched-earth antiabortion laws ends up before SCOTUS. There may (and I’m stressing may) be enough anti-Roe votes on the court right now to kick stare decisis to the curb (I’m hardly sold on the idea that Roberts wants to do that). And even if the anti-Roe votes aren’t 100% guaranteed, pro-choicers realize that they’re only one Bader Ginsburg banana-peel slip away from certain defeat.

Although SCOTUS declined to save Indiana’s “no race-selection abortions” law from a lower-court block last week, Justice Thomas, while agreeing that the race-selection law wasn’t a good test case for Roe, confirmed what everyone knows at this point—a Roe challenge is inevitable. Channeling his inner Action Jackson, Thomas basically said, “Mark it on your calendar; that day is coming.”

Should Roe get tossed, the abortion battle will be thrown to the states. As I’ve written before, almost one-third of all U.S. states have abortion rights guaranteed in their constitutions. Here in Abortifornia, only an impossible constitutional amendment could take away our official state recreational activity. But with no Roe, the pro-choice movement is going to be forced to face perhaps two dozen or more state battles. Some will be in deep-red states, others in the kind of battleground states that lean Democrat but went for Trump in ’16. No matter how you slice it, it’s gonna be a long, hard, and costly fight.

And just like the slovenly guy’s cockroaches, pro-choicers are ill-prepared for a life-or-death struggle. Because when’s the last time they’ve actually had to fight? Sure, a couple of times per decade they have a GOP SCOTUS nominee to oppose, and every now and then they face the scourge of Christians praying outside their clinics. But when’s the last time they’ve had to engage in a down-and-dirty battle to actually keep abortion legal?

“Just like the slovenly guy’s cockroaches, pro-choicers are ill-prepared for a life-or-death struggle.”

Not since Roe (and the later cases that solidified the precedent, like Casey and Webster) has the pro-choice movement had to face a fight in which the outcome could lead to no more legal abortions. Yes, there have been skirmishes, but always over the icing (late-term, public funding, parental notification, etc.), not the cake itself. The overall status of abortion as legal in the U.S. could never be altered by any state law, or any state legislature, or any governor. Roe guaranteed that.

The pro-choice mavens have gone soft. Don’t be fooled by the fact that all pro-choice propaganda for the past forty years has been hysterical (“Women will die in back alleys! We’ll be chattel slaves!”). Abortion was never in jeopardy, and the higher-ups in Pro-Choice Inc. knew it. The hysteria was for fund-raising purposes, and anti-Republican electioneering. They wanted you to think the end was nigh, but it was never even nearly nigh. Properly primed donors would write checks, scared voters would vote Dem, feminist movie stars would tweet, and they’d think it was a real battle. But it was merely a war game.

Meanwhile, pro-lifers were in the trenches, cutting their teeth for the battle to come. This included lobbying state legislators to craft antiabortion laws that they knew would be struck down by the Supreme Court, and gathering signatures for ballot initiatives that they knew would lose (or, if not, be struck down by SCOTUS). Pro-lifers have spent the past forty years practicing for the fight, sharpening their tools. Pro-choicers have been slacking off, knowing that rich daddy Roe would never let them lose. It’s like two students in college. One has to maintain good grades or he’s out, the other is the son of the school’s top donor.

Students with rich, well-connected daddies lose their edge (or never develop one).

If Roe is overturned, pro-choicers will have to fight state-by-state battles that could conceivably end in defeat. Daddy can’t help you now. Yes, pro-choice has some skilled and vigorous litigators, but they’ve been trained for courtroom combat. They’ll be of little use in a fight for the hearts and minds of red-state legislators, or red-state voters.

One of the biggest threats that the leaders of pro-choice organizations will face is that they’ll have to start spending some of that precious, precious money. They’ve had it so damn good up till now. The leaders of these “nonprofits” have lavished themselves with insanely large salaries and perks, and they’ve spent the rest on fancy Hollywood events to raise even more money. Pro-choice money has mainly been used to make more money. With Roe gone, it’ll have to be used for costly state-by-state brawls that might sap resources and yield no victories.

Along with Roe, pro-choicers have had another “rich daddy” looking out for them and fighting their battles: the mainstream media. For four decades, the media has served as a mouthpiece for the pro-choice position. To this day, there are still few better pieces of media criticism than the late David Shaw’s 1990 L.A. Times exposé of pro-choice bias in the media. Yes, I said the L.A. friggin’ Times, and Shaw’s lefty coworkers never forgave him for his heresy, even to the extent of boycotting the celebration when Shaw won a Pulitzer the following year for a different story.

In more recent times, other journalists have complained about the pervasive pro-abortion bias in newsrooms.

Having the professional press do all the talking for you like the highly paid “fixers” they are leaves you ill-prepared to argue your case yourself. But pro-choicers realize that they may soon be facing uphill battles in red states where the average voter and legislator is not influenced by The New York Times or CNN or Slate. Their mouthpieces will be of limited value. This scares the bejesus out of them.

Leftists, the relatively smart ones at least, understand that Trump’s 2016 victory was due in no small part to the fact that the Hillary people, and Hillary herself, had grown complacent. They had 90% of the media acting like bought-and-paid-for PR agents. They had the pollsters singing reassuring ballads of an inevitable Hillary landslide. They had Hollywood. They had the Democrat party machine. And most important, they had big tech and social media on their side. They didn’t have to work at getting their message out. They didn’t have to worry about being banned from Facebook or Twitter. They didn’t have to struggle for crumbs. They got nothing but cake ’n’ gravy, as others did the heavy lifting for them.

The Trump people, on the other hand, had no choice but to refine their survival skills. They had to learn to be crafty. How to message effectively without getting Zucked or Dorsey’d, and—if they got banned—they had to live in the cracks and crevices of the ’net, exploiting sites like 4Chan and Reddit. They had to learn to meme. They knew they couldn’t count on the GOP machine. They had to learn, in every way, to fend for themselves. They became street fighters, feral cats. Clubber Lang in Rocky III.

By November ’16, the Trump army was lean and mean. The Hillary klatch was fat and lazy. And we all know what happened.

As I’ve written many times, abortion is not my bailiwick. I know many fine folks on both sides of the issue, and I have little interest beyond sitting back and watching the enthusiasts fight. And if Roe is overturned (and I’ll say one last time what a big “if” that is, as if the guy who saved Obamacare would ever kill Roe), my enjoyment will come from observing how the bloated, indolent, spoiled pro-choice partisans respond to the challenge.

Want my opinion? They’re not going to go for a hearts-and-minds approach. Maybe because they’re ill-equipped to do so in “hostile” territory, or maybe because people who are used to having others fight their battles make lousy foot soldiers. They’re going to go with the “fuck your opinion, we’ll squeeze you until you do what we want” approach. Look for lots of boycotts. Don’t expect “Dear red state, please don’t outlaw abortion! Here’s why…” Expect “If you damn rednecks outlaw abortion, we’ll kill your tourist industry, strangle your convention business, and drain your jobs by forcing ‘socially responsible’ companies to withdraw from your state.”

Expect that to change. Faced with the choice of having to cogently argue their cause or use their lapdogs to silence the opposition, pro-choicers will choose the latter. That’s what any spoiled brat would do. Just wait until Twitter and Facebook decide that antiabortion is “hate speech.” Sorry for repeating an obscure reference, but Action Jackson applies here, too.

The left’s reliance on media coddling and big tech censorship weakens its underbelly. The left is that kid in school who runs to the principal every time he gets shoved on the playground. “Fight my battles for me, Roe. Silence those who oppose me, Zuck and Dorsey! I was upset by a meme. Go destroy the creators, CNN and Daily Beast!”

As fired up as leftists claim to be over Trump, it’s very possible that this underbelly weakness may prove their undoing in 2020. And if so, if even the threat of four more years of Trump can’t motivate a bunch of slacker cockroaches to pull it together when it’s crunch-or-be-crunched time, pro-lifers will have every reason to be optimistic for the future.