The Coronavirus Reveals Our Lack of Social Trust 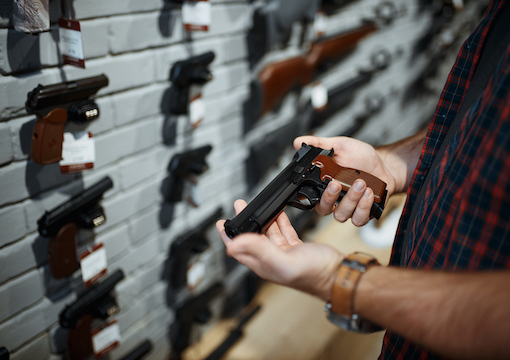 If you’ve been to a supermarket recently, you’ve probably noticed how quickly people are buying up toilet paper, hand soap, dry goods, meats, and other necessities. More interesting, and disturbing, though, has been the rise in gun sales across the nation. Ammo.com reports that from March 10, when cases of the coronavirus reached over a thousand in the U.S., through March 17, there was a 276 percent national increase in gun sales. And in some states, the increase has been staggering. As we read at the useful website:

Oklahoma saw a growth of 1,081% in sales, and borders states like Texas and Colorado, both of which have been hit hard with COVID-19.

Mississippi has also seen a significant increase at 1,049%, perhaps influenced by its proximity to Louisiana, which has surpassed 100 confirmed cases.

Speaking of which, Louisiana has seen a growth of 1,041%, which may be due to the increasing number of cases the state has seen over the past week.

Alabama, which borders COVID-19 hot spots in Florida and Georgia, has seen a sales boost of 892%.

Wyoming, which borders Colorado and its 100-plus coronavirus victims, has seen an increase of 819%.

Accordingly, the web is full of pictures of people waiting in lines at gun stores; in some cases, these lines extend for several blocks.

Writing in The National Interest, Hunter DeRensis summarizes the reasons for this behavior, which, even if a bit paranoid in some cases, still reveals a lot about the nature of our society:

While obviously firepower will be useless in stopping the coronavirus, citizens are preparing for what they fear will come as a result. Across the country, restaurants and bars are shuddering [sic] their doors at the behest of the government for the duration of the crisis. The immediate result of this will be a large number of people in the lower-income bracket who have lost their jobs and have no means of income for what could be at least an eight-week period of isolation.

“Gun buyers appear to be acting on the assumption that mass unemployment will lead to desperation.”

Gun buyers, many of them purchasing weapons for the first time, appear to be acting on the assumption that mass unemployment will lead to desperation. And an increase in desperate people could lead to marginal increases in crime such as commercial breaking and entering, residential break-ins, or even looting.

To be sure, even during ordinary times, compared with other technologically advanced, First World nations, the U.S. is an exceedingly violent and lawless place. But the coronavirus, besides being deadly, represents a threat to people’s day-to-day practical survival. As a result, they fear their neighbors even more than they usually do.

On Tuesday, for instance, while I was returning home from running an errand, I passed by the parking lot of Southside Pizza in Graduate Hospital, where I live in a rather “diverse” neighborhood in Philadelphia. Seeing a man putting on a bulletproof vest over his undershirt, I immediately became curious, so I politely asked him whether he was a cop or perhaps a security guard. It turns out that he was a pizza delivery man who was “not taking any chances”!

After all, though the Southwest Center City neighborhood is rapidly gentrifying, it remains, as I have said, “diverse.” Thus, not quite two weeks before, just a block away, in broad daylight at 1:30 in the afternoon, a young black man named Kahil Williams-Husky had been shot and killed after three other young black men hopped out of a car and chased him on foot for several blocks, all the while unleashing a hail of bullets in his direction.

Moreover, in Philly as in other large American cities, it is not unheard-of for black hoodlums to order a bunch of pizzas, then when the delivery man shows up, to rob him for the food and whatever else they can get from him.

Again, if this is what life is like in America under ordinary conditions, how much more reason do people have to fear their neighbors during an epidemic, whether it’s the corona one or another!

It’s terrible in this kind of neighborhood. We’ve got babies. We’ve got children. It seems like every six to nine months, something like this happens. I’m just flabbergasted. I wish somebody maybe could tell me what I could do to help make the neighborhood a better place.

That last sentence suggests Martin is a liberal, of whom there are many in the neighborhood. As for what such persons “could do to help,” I would say that they could start by not making excuses for black violence and cultural dysfunction generally, holding, for example, that these grave social problems are effects of black poverty and “systemic racism.” Next, these liberals could support broken windows policing, which is highly effective, albeit controversial, since race realism is a taboo subject. But of course, I am aware that these changes are quite unlikely to happen.

Meanwhile, the truth endures. Although white liberals insist that “diversity is our strength,” their lives, ironically, are so much white flight, and as the liberal political scientist Robert Putnam has shown, racially diverse societies are marked not by fellowship, cooperation, and comity, but by a general decline in social capital—most evident in the rises in anomie and isolation—and by suspicion and distrust.

Here the coronavirus merely serves to exacerbate and make more apparent what is already so. For make no mistake: Though publications like The National Interest aren’t going to say it, in the massive surge in gun purchasing, there is a good deal of white fear of black violence, nor is such fear unwarranted in general, even if, in some cases, it may be excessive and/or paranoid. In his article “The Black Death: America’s Overkill Epidemic,” the scholar George M. Hollenback used FBI crime statistics to demonstrate the extraordinary overrepresentation of blacks in violent crimes, and in homicides in particular. And as he put it,

Although the lion’s share of these murders involve black victims numbering into the thousands each year, in order to further the agenda of eternal black victimhood, attention is being misdirected away from them by…[Black Lives Matter’s] histrionic spectacles that focus a disproportionate amount of attention on a relatively small number of questionable or unjustifiable black fatalities at the hands of law enforcement officers each year.

It is another consequence of the coronavirus that, since they can’t work and since so many things are closed, a lot more people have more free time on their hands, and this, too, presents a challenge for maintaining law and order. For example, normally every day of the week the YMCA here in Graduate Hospital is full of young black men playing pickup basketball. Now, however, the Y is closed. So what will the young black men do with themselves? Since some are bad characters, it’s a safe bet that they will get into mischief.

In this difficult time, as we all deal with the unpredictable effects of the coronavirus, it is incumbent upon our politicians to provide the leadership we need. Of course, though, the left is already failing at this. Thus, Champaign, Ill., mayor Deborah Frank Feinen (D) has issued an emergency coronavirus order that gives her the power to halt ammunition and firearm sales in the city. New Orleans mayor LaToya Cantrell (D) has signed a coronavirus emergency order allowing her to ban the sale and transportation of firearms. Although well intended, it should have been obvious that these efforts are unlikely to prevent gun violence and violent crime, because criminal characters don’t rely on the legal purchase of guns, and besides, there is a huge number of illegal guns in circulation. But needless to say, ordinary, law-abiding citizens may now find it harder to protect themselves from the bad people among them.