The Dynamics of Repute 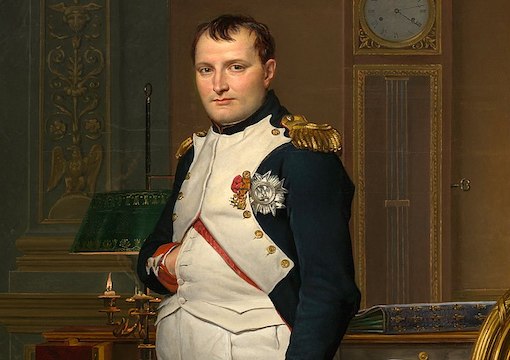 The Emperor Napoleon in His Study at the Tuileries

The rise and fall of fame—or at least of the number of times books mention the name of an artist or other historical figure—can be conveniently graphed using Google’s free Ngram Viewer.

Google has digitized the contents of 129 million books. Ngram lets you look up how relatively frequently a text string comes up out of all the words published in all the books in any year from 1800 to 2019.

To show you what you can do with Ngram to answer your own questions about trends in fame over the past 220 years, let’s start out by graphing the number of mentions in books of two really, really famous guys: Shakespeare and Napoleon: 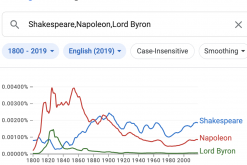 If I’m reading this right, from about 1810 to 1860, about 0.003% of all the words published in English-language books consisted of “Napoleon.” That sounds like a small percentage, but by Ngram standards it’s huge: In the average 100,000-word book published in that half century, “Napoleon” came up three times and “Bonaparte” once. (Not every single use of “Napoleon” referred to Bonaparte, of course. Some books referred to other men, dogs, or cats named after the French emperor.)

“My impression is that pundits like myself are generally forgotten within a week of retirement or death. It’s the nature of the game.”

By the end of the 19th century, the long obsession with Napoleon had faded enough that Shakespeare, then peaking in popularity, exceeded him in mentions by English-language authors. And since about 1980, both names have been climbing in popularity once again.

I also included in the chart a man who is famous for becoming famous: the English poet Lord Byron (1788–1824), who is often said to have become in the years after Waterloo the first modern cultural celebrity. “I awoke one morning to find myself famous,” observed Byron about his sudden Elvis-like notoriety. At the peak of his prominence, around his death at age 36 fighting for Greek independence from the Muslim Ottoman Empire, the text string “Lord Byron” appeared about once per book published.

And I’m understating how popular the Romantic poet and adventurer was in his day because I’m only counting references to “Lord Byron” rather than to just “Byron.” If I ask Ngram for just “Byron,” it finds more than half as many references as to “Napoleon” in 1826, which is remarkable. 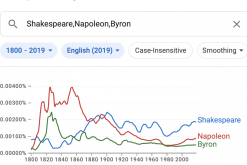 On the other hand, this second Byron graph can’t be trusted in depicting the poet’s enduring fame because his once vast renown launched a fashion for naming boys “Byron,” which has since became a traditional first name. This means the majority of uses of “Byron” in the 20th century are probably references to other individuals with the first name of Byron. But while Lord Byron doesn’t come up all that much anymore in daily conversation or even in books, his name lives on in the countless sports heroes and popular performers whose given name descends from his surname.

One thing to keep in mind about this methodology is that it measures mentions in books rather than in journalism. Thus, the curious trends reported by Ngram of the fame of four singing sensations: 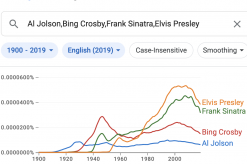 Note that the name of blackface singer Al Jolson showed up in books about as often in 2000 as in the late 1920s when The Jazz Singer was revolutionizing movies with its soundtrack. And yet, unlike in 1927, very few people in this century can stand Jolson’s shtick.

There appear to be two factors going on. First, although these singers certainly didn’t lack for media coverage in their day, they just didn’t get written about all that often in books. Second, there may well be far more books touching on the history of popular music in recent decades than there were in, say, 1960, when popular music was less often seen as worthy of hardcover analysis.

Not everybody who attains some degree of public familiarity is going to keep it like Napoleon and Shakespeare (or even Jolson) have. For example, my impression is that pundits like myself are generally forgotten within a week of retirement or death. It’s the nature of the game.

So here are five of the most famous pundits of the 20th century: 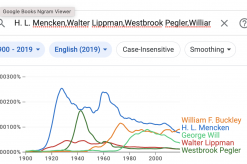 Critic H.L. Mencken was vastly famous in the 1920s and remains quite often mentioned today, in part because he wrote about literature as well as current events.

Westbrook Pegler became a sensation around 1940 by criticizing the New Deal, especially its cozy relations with corrupt labor unions, but is largely forgotten today. Serious-minded liberal Walter Lippman continues to be referenced by serious-minded liberal authors (but by nobody else).

William F. Buckley’s name shows up relatively frequently in books, such as Matthew Continetti’s The Right, in part because of his memorable personality, in part because of the constant laments that conservatism today lacks a Torquemada who can silence deplorables the way Buckley used to do.

George Will’s name is fading, even though he is still around.

It’s pleasant to imagine your contributions will someday be discovered after your death, like those of geneticist Gregor Mendel or poet Gerard Manley Hopkins. Here are some artists who died before the full bloom of fame: 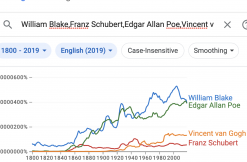 A high school teacher of mine argued that most artists who died before they became famous died young and, like Van Gogh, would have become rich if only they’d lived their three score and ten.

I think that’s largely true, but you’d have to be more determined than I am to prove it. 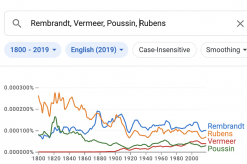 One extraordinary example of posthumous fame is Dutch painter Jan Vermeer. He was obscure for the first two centuries after his death (although a thin chain of connoisseurs kept his name alive), before becoming a legend in the 20th century.

Similarly, some polyphonic composers like Johann Sebastian Bach and Antonio Vivaldi fell into obscurity when the Baroque style went out of fashion in the mid–18th century and their regard had to be revived later, as Felix Mendelssohn did for Bach with his landmark 1829 performance of the St. Matthew Passion. 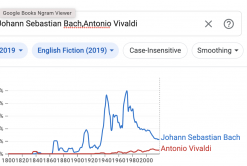 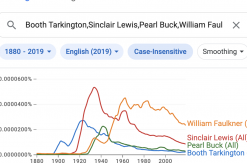 What about 19th-century English heavyweights? 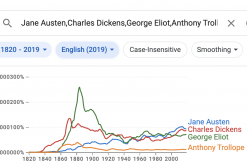 Among 19th-century English novelists, Jane Austen has overtaken Charles Dickens, although neither compares to the peak reached by George Eliot (Mary Ann Evans) in the later 19th century. (Note that for unexplained reasons, the author of Pride and Prejudice is usually referred to as “Jane Austen” rather than as “Austen,” while “Dickens” more often suffices for the author of Great Expectations. So, this nomenclature quirk may be causing Dickens to be undercounted when just his last name is used.)

What about genre writers? 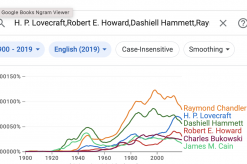 Among my list of 20th-century American movie legends, Marilyn Monroe leads in appeal to authors: 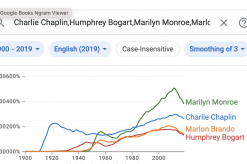 But all seem doomed to decline because young people don’t watch black-and-white movies anymore. (Isn’t it about time for a high-quality colorization of Some Like It Hot?)

Among 20th-century London writers who used initials, fame hasn’t fully dissipated, with the youngest, C.S. Lewis, more written about in this century than in his own: 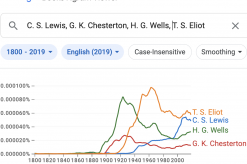 Lewis’ reputation, like that of Aldous Huxley’s, did not benefit from widely read newspaper obituaries because both writers had the misfortune to die on Nov. 22, 1963, when the press was otherwise engaged.

In contrast, my impression is that the best time to die to have your life recalled at length in the newspapers is between Christmas and New Year, when the understaffed outlets are desperate for opportunities to splash pre-written obituaries.

You can no doubt come up with questions of your own about the rise and fall of repute, so I encourage you to try out Ngram.