The Embers of History 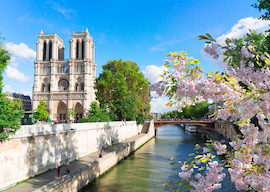 Last week’s fire in the world’s most famous Gothic cathedral, Notre-Dame de Paris, reminds us of the increasingly awkward political issue posed by the immense achievements of the European past.

In the current year, liberal individualism is falling out of fashion. As our culture becomes more demographically diverse, our assumptions revert back to more atavistic ways of thought. The rising ethnicities who look to comic-book author Ta-Nehisi Coates as their leading intellectual assume that one’s worth is not dependent upon Jeffersonian abstractions about individual dignity, but upon the renown of one’s ancestors. Thus, in today’s Coatesian Age, it looms larger than it did a generation or two ago whether one’s forebears built Notre-Dame or a hut.

In an era when our most influential voices attempt to unite our increasingly diverse and therefore divisive ethnicities around demonizing the forefathers of Europeans, the overwhelming beauty of the cathedrals of the high Middle Ages is, as they say, problematic.

As Paul Johnson wrote in his 2003 book Art: A New History:

The medieval cathedrals of Europe—there are over a hundred of them—are the greatest accomplishments of humanity in the whole theater of art.

After such knowledge, what forgiveness?

Coates has made himself a fortune promoting an antiquarian theory about how whites made themselves rich by the “plunder” of blacks.

Yet the vast wealth devoted to the construction and ornamentation of the Gothic cathedrals of Europe can hardly be attributed to slavery or colonialist exploitation, since they were begun long before the age of exploration. Notre-Dame, for example, was largely constructed between 1163 and 1345.

While occasionally the faithful would volunteer to haul building materials for free, we now know much about the finances of the cathedrals. In summary, they paid out huge sums in market-rate wages to roving artists and to local craftsmen and laborers.

Nor can the technological advances of the Gothic cathedral be said to have been “stolen” from non-Europeans.

“In contrast to today’s designers, the obscure architects of Notre-Dame were representative of a humbler age.”

Leave aside the absurdist zero-sum thinking that concepts can be stolen that has been returning to fashion in the past few years as dumb Afrocentrist ideas have been encouraged. The Gothic cathedrals were radically new because of their huge advances in making the walls lighter so they could let in more light through their stained-glass windows.

The key breakthroughs that made these achievements possible are well-documented. Rapid progress was made in Northern Europe in the 12th and 13th centuries, especially around Paris, beginning with the Abbot Suger’s Saint-Denis in the 1130s. Interestingly, the rebuilding of Saint-Denis’ north tower, which was torn down for safety’s sake in 1846, is finally supposed to begin this year.

Suger’s couplet is carved on Saint-Denis:

For bright is that which is brightly coupled with the bright,
And bright is the noble edifice which is pervaded by the new light.

This “new light” revolution reached its climax in the middle of the 13th century at the astonishing Sainte-Chapelle a few blocks from Notre-Dame on the Île de la Cité in the Seine.

Various pundits and architects such as Norman Foster are now calling for Notre-Dame to be rebuilt in some steel-and-glass modernist style, like a vast Apple store, that they assert would be more fitting for our age of diversity. For example, Erika Harlitz-Kern wrote in the Daily Beast:

Give Notre Dame a Modern Roof the Alt-Right Will Hate

Medieval Europe was a crossroads of global influence, not a mythical all-white past. The new Notre Dame should reflect that.

Ironically, they don’t realize that contemporary starchitects with their egomaniacal hatred of tradition represent white maleness at its most Promethean and annoying. As my old friend John McCarthy, a founder of artificial intelligence, observed, “When architects get prizes, the people suffer.”

In contrast, the world loves Notre-Dame (which averaged 13 million visitors per year) for many of the reasons that would be familiar to Victor Hugo, author of the 1831 best-seller The Hunchback of Notre-Dame, which inspired its restoration after its desecration during the French Revolution, such as its romantic antiquity and its paradoxical combination of intellectual rigor of design with eccentric richness of ornamentation (especially its wonderful gargoyles).

In contrast to today’s designers, the obscure architects of Notre-Dame were representative of a humbler age.

One problem with appreciating the great medieval cathedrals is that we don’t know much about the personalities of the countless artists who worked on them. We take an interest in celebrities, with which more recent eras of art are much better endowed.

For instance, we don’t know even the names of the anonymous architects of Notre-Dame’s first four-score years. From the mid–13th century onward, we do typically possess the names of the designers, but little in the way of interesting anecdotes or overarching narratives have come down to us.

In contrast, the artists of the 15th-century Italian Renaissance, especially the Florentines due to Giorgio Vasari’s immensely influential, if biased, 1550 book Lives of the Most Excellent Painters, Sculptors, and Architects, are so well-known that their names are applied to Teenage Mutant Ninja Turtles.

Ironically, although Venice was the capital of book printing, it fell to second place in the received history of Renaissance art because it didn’t publish its artists’ stories as engagingly as the Florentines did theirs. Vasari bequeathed thrilling stories, such as how Brunelleschi had built the dome of the Florence cathedral, the first huge dome erected since ancient times, as a rebuke to the pointed style of “the barbarous German.”

But we do know enough about the people who built the Gothic cathedrals in the 12th and 13th centuries to know that they were not racially diverse by today’s standards.

On the other hand, it’s important to note that one key cultural innovation of the French was an appreciation for the feminine, which is why the cathedral is named “Our Lady.” This glorious innovation is now under threat from the new chauvinist migrants to Paris.

As Vasari complained, the creators of the Gothic cathedrals were largely Northern Europeans excited that they had progressed beyond their backward barbarian heritage to assume world leadership in architecture.

This is a problem for the conventional wisdom, which propagandizes that, in the words of Dan Quayle, diversity is our strength.

One contemporary solution is to assert that the population of Europe in the distant past must have been highly diverse and that this fact has been whitewashed.

Back in 1991, when Morgan Freeman was cast alongside Kevin Costner in Robin Hood, it was still felt necessary to dream up a backstory about how the two heroes had met in Jerusalem during the Third Crusade. By last year’s Mary, Queen of Scots, however, no justification was seen as necessary for explaining the casting of random blacks and Chinese as aristocrats in 16th-century Britain. (Amusingly, Hugo made the heroine of his Hunchback of Notre-Dame somewhat less improbably a beautiful Gypsy girl.)

But this racial fairy tale about a diverse medieval Europe basically isn’t true. The evidence is mounting against it as grave-robbing geneticists scan DNA from old corpses.

Alternatively, the reigning dogma might assert that since the cathedral wasn’t built by diverse peoples, Notre-Dame therefore can’t be beautiful.

The problem with this approach, though, is: Just look at it.