The Errors of Modernism 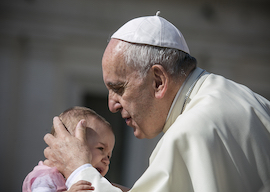 Father Munkelt is a New York City-based priest who is as intelligent and well-read as anyone I’ve known, and he wrote most of this essay for Takimag under my byline. (Journalists are expert cheaters and plagiarizers, but when it comes to a man of God, I cannot speak with forked tongue.) I asked the good father why the Catholic Church is in such turmoil and about the sex scandal. Since the end of the classical pagan world, the Catholic Church has been the most important and formative institution of Western civilization, according to Father Munkelt. Yet it is now the most vilified, and hardly a day goes by without an attack against it by that most malignant and subversive of newspapers, The New York Times. (The sex scandals perpetrated by Hasidic rabbis in New York against children are, of course, ignored by the Times.)

“It’s time for the Church to stop trying to curry favors with an age that basically hates Christ and his message of true love.”

Regrettably, the debauched within the Church of Christ have in practice brought the Church to its knees before the world. After brilliantly dissecting the errors of modernism for over 100 years, the Vatican lost its nerve and cravenly embraced the enemy. In practice, that is. For the Church retains a doctrinal tradition that is fundamentally anti-modern. While it does not reject technological progress, it absolutely dismisses moral progress. Mind you, there is moral teaching and immoral practice, and the vile New York Times equates the two when attacking the Church. The present moral decay of the West is the direct outgrowth of the modern detestation of the moral order of nature. (Same-sex marriage must be anti-nature, no matter what Elton John or some Hollywood types tell us.) From the beginning, that order has been the foundation of the Church’s ethics. But then it was watered down until ethics began to collapse, and now we have to seek our own good and pleasure, but not injure others.

Under the guise of human (not natural) rights, Western elites have become purveyors of fiat rights, rights based on demands, no matter how perverse, of noisy interests and their liberal anti-Christian backers. It’s time for the Church to stop trying to curry favors with an age that basically hates Christ and his message of true love. And in my opinion—Father Munkelt kept quiet on this one—the Pope should resign and stop telling us to open our borders to everyone. We already have, and our own poor do not enjoy the comforts of the Vatican but experience firsthand the crime the Pope’s favorites bring us. More Father Munkelts, less Argentine Popes is my message. Have a very happy Christmas, all of you Takimag readers.