The Fight Against Politically Correct Literature 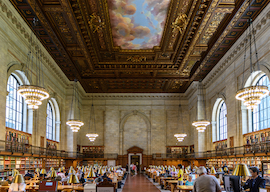 In recent columns I’ve argued that Steven Pinker, Kevin Williamson, and others are terribly wrong to insist that material progress entails a superior form of life. For our problem today is that we Americans are so devoted to work and consumption that we don’t know how to live. We talk about GDP growth without considering what it is for. We look at all our fancy new gadgets, as more of them are produced every year, and pride ourselves on our “progress,” but all the while we grow more anxious, desperate, and miserable. Yesterday, while observing a vast, harried crowd during rush hour, I not only felt fortunate that I don’t have what people call a “career.” I thought that the ordinary American’s way of life is less intelligent than that of my dog Ava, who, though she spends the majority of her days asleep, at least does not waste her time with pointless stress or play base social games with mediocrities, dullards, and charlatans at some dreadful workplace.

There is a better way. We can resist the crass instrumentalism that characterizes our time. We can recognize that, though this world is no utopia, more people can combine the need to work with the idea of a vocation, in the old sense of a noble calling. We can distinguish between happiness—usually a fleeting condition, and vain to pursue in itself—and satisfaction, the latter representing meaningful activity and accomplishments.

Such real amelioration would involve a rebirth of culture, where the word does not mean Harry Potter, the Kardashians, and Hollywood blockbusters. It would emphasize a serious conception of literature since it, more than any other art, instructs and affords pleasures that, though sometimes difficult, are the more valuable for that.

Yet achieving this goal requires prevailing over the identity-politics interests that have long debased literature, as they have everything else. So bad is the situation today that the very preservation of our literary heritage is threatened, like historical memory in general. According to Sofia Leung, a librarian who works at MIT,

Library collections continue to promote and proliferate whiteness with their very existence and the fact that they are physically taking up space in our libraries. They are paid for using money that was usually ill-gotten and at the cost of black and brown lives via the prison industrial complex, the spoils of war, etc. Libraries filled with mostly white collections indicates that we don’t care about what POC [people of color] think, we don’t care to hear from POC themselves, we don’t consider POC to be scholars, we don’t think POC are as valuable, knowledgeable, or as important as white people.

“Literature, more than any other art, instructs and affords pleasures that, though sometimes difficult, are the more valuable for that.”

Leung’s crude syntax, which is particularly embarrassing from a librarian, alone suggests the paltry character of her mind—that of one chattering parrot among countless others. Not to speak of the woman’s “reasoning,” for what exactly does “physically taking up space in our libraries” add to the idea of “their very existence”? Nothing. It’s utterly redundant. But, having worked up an ardent head of steam, Leung stumbles forth, apparently lacking the ability to give substance to her empty, lemming-like indignation.

It is not worth refuting all of Leung’s ignorant assertions, the voguish cant being self-evidently false. I will focus only on the most important one—namely, the silly claim that “Libraries filled with mostly white collections indicates that we don’t care about what POC [people of color] think,” and so forth. All it takes is a little knowledge of history and common sense to know how wrong this is. Nobody would take the fact that a Chinese library consists mostly of books by Chinese as evidence of racism and all the rest. Nor should we make such a mistake when it comes to our own country. For America was founded by British men, and it remains a majority white country. So, it’s grossly innumerate to think that American library collections (or anything else, for that matter) should be like a pizza pie, with each ethnic group’s books and literature representing an equal slice of the whole. As is usually the case with leftist resentment-pipers, Leung’s opinions betray who the real racist is: Leung herself. Thus, the hypocrite reads racism into a context where there’s no evidence of it, and all because she hates white people.

It’s necessary to understand, moreover, that works of literature are essentially verbal constructions. Race, gender, and sexual orientation are not aesthetic criteria. And there is no reason to believe that the talent, craftsmanship, and discipline that determine the creation of literary art are equally distributed among groups and the individuals who constitute them.

Such thinking as Leung’s, so touchy and tiresome, is found not only in America, but is now common throughout the decaying West. Alison Flood, in an April 18 article in The Guardian, reported:

Several schools across Barcelona are considering purging their libraries of stereotypical and sexist children’s books, after one removed around 200 titles, including Little Red Riding Hood and the story of the legend of Saint George, from its library.

The Tàber school’s infant library of around 600 children’s books was reviewed by the Associació Espai i Lleure as part of a project that aims to highlight hidden sexist content. The group reviewed the characters in each book, whether or not they speak and what roles they perform, finding that 30% of the books were highly sexist, had strong stereotypes and were, in its opinion, of no pedagogical value.

According to Associació Espai i Lleure, if young children see “strongly stereotypical” depictions of relationships and behaviours in what they read, they will consider them normal. Anna Tutzó, a parent who is on the commission that reviewed the books, told El País that “society is changing and is more aware of the issue of gender, but this is not being reflected in stories.” Masculinity is associated with competitiveness and courage, and “in violent situations, even though they are just small pranks, it is the boy who acts against the girl,” which “sends a message about who can be violent and against whom.”

If scolds like Anna Tutzó could have their way, the future would contain no “offensive” experiences at all, but would be a perfectly boring hell. They probably don’t know that, as Lee Jussim and other social psychologists have shown, “gender stereotypes are mostly accurate,” and that “Stereotype accuracy is one of the largest and most replicable effects in all of social psychology.” Needless to say, stereotypical gender truths do not necessarily entail “sexism.” And if you want to protect children from any possibly negative influence—well, then, so much for living life itself. What matters, however, to middling women with intellectual pretensions is feelings, nothing more than feelings, because such women don’t have the ability to do work of actual intellectual merit, and so, for vanity’s sake, they must distinguish themselves through pseudo-moral games.

It is boys and young men who pay the severe price, healthy male development—the bold, inspiring spirit of imaginative “competitiveness and courage”—being thwarted by people who don’t understand masculinity and thus have no business opining on it. It is now incumbent upon fathers throughout the West to ensure that their sons receive the education they need. Women are not only inadequate for this crucial task; they are positively precluding it.

And that is no wonder. Throughout its history Christianity often censored things that contradicted or threatened its tenets, but it didn’t assign much value to feeling in general, because the religion’s precepts were decided by men. In contrast, the decline of literature reflects the increased influence of women throughout the Western world (though certainly not the increased influence of women only; the leveling resentments of “people of color” also are a significant factor). For women are more sympathetic and more sensitive to others’ feelings than men. They are also higher in neuroticism. So they tend to be more upset by “insensitive speech” than men, and being more egalitarian, more conformist, and less open to ideas than men, more likely to censor it. To be clear, I am speaking in terms of averages, of statistical group differences, and of course, there are many tolerant, open-minded, nonconforming women among us.

Indeed, the irony is that it may well take principled female leadership to win the fight against political correctness, so that literature (and other vital elements of high culture) once again can make life more worth living. Today both literary publishing and academe are dominated by women, and on the whole, the men in our society don’t have the guts to call out their nonsense in the way that men generally do to each other (or at least, once did). I follow the work of certain male social scientists who frequently demonstrate the feminist corruption of academic standards. It cannot be lost on all of these men that the general decline of academic standards (and of aesthetic standards, too) is correlated to the increased influence of women throughout the West, and that such decline is correlated to the sex differences described in the paragraph above. Still, even the extremely rare conservative male social scientists don’t seem to be willing to address these sensitive subjects. After all, the stakes are high. You will almost certainly be verbally attacked. You may be ostracized. You may even lose your job. Although dealing with the problem of excessive, corrupting female influence requires collective action, it must be initiated and led by individuals. Who, then, is willing to take a stand?