The Future of Christianity in America 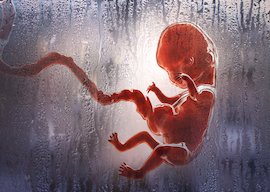 On Monday, Virginia Democrats introduced the Repeal Act, a controversial bill that would make abortion legal up to the moment of birth. The current law allows abortion if three physicians agree that “the continuation of the pregnancy is likely to result in the death of the woman or substantially and irremediably impair the mental or physical health of the woman.” Per the new bill, all that would be required is consent of the woman and of the doctor performing the abortion. Similar legislation was passed on Jan. 23, in New York State.

Once passed, such legislation is thought to represent a victory for liberals, and for feminists in particular, women no longer being controlled, or anyway being less controlled, by the patriarchy, or some such cant. Our culture values nothing so much as autonomy, and the implication is that those who lack it—in this case, “unborn babies”—don’t deserve to live. The liberal reasoning seems to be: “Those who are not capable of autonomy have no right to become capable of it.” Thus the fate of the absolutely dependent and the absolutely vulnerable is decided by other people, who may or may not possess good judgment. For Patrick Deenan, liberalism is inherently self-defeating: It failed, paradoxically, because it succeeded. The liberal conception of abortion—which devalues life itself for autonomy’s sake—is an apt example of why Deenan believes that.

It doesn’t take much imagination to see that the liberal reasoning is appalling, especially from the point of view of the absolutely dependent and the absolutely vulnerable. Before she died from various health complications, my mother spent the last years of her life in increasing dependence on myself and others. None of us thought, “Well, since she is not capable of autonomy, she has no right to our care.” The reason was that we felt a sense of obligation to her, nor are all obligations determined by autonomy or by what people want to be the case.

Liberals are right that conservatives tend to devalue the autonomy principle—or “a woman’s right to choose”—because raising a child is an enormous burden, while the sad truth is that every life is not worth living. After all, many women, and many couples, are by no means fit to raise a child, and adoption is a rather limited solution. Every year there are about 1.3 million abortions in the U.S. Only 4% of women with unwanted pregnancies place their children through adoption. Even so, there are more than 100,000 children waiting to be adopted, and about five times as many in foster care, where dysfunction and worse abound. (Lacking space, I must pass over the problems with international adoption.) So, in short, the abortion issue is not as simple as simply recognizing “the right to life.”

“Christians who hope to preserve their values had better be prepared to fight.”

Meanwhile, conservatives are right that liberals, with their incessant talk about rights, tend not to recognize any sense of obligation to “unborn babies.” And surely the concept of obligation is prior to that of right here. For are not women (and men) obligated to prevent unwanted pregnancies? Statistically speaking, very few abortions are required by women’s endangerment or grave health needs, and before the sexual revolution, people didn’t regard abortion as an acceptable way of dealing with the consequences of their imprudent actions. Finally, as David Marcus puts it, “One may argue that the woman’s bodily autonomy outweighs the child’s right to live, but they must, if arguing in good faith, concede that what they are advocating to kill, is indeed, in every meaningful way, a child.” They must also, I would add, stop obscuring the truth of the matter via lazy and selfish talk about rights. (When it comes to moral issues, few things produce as much confusion as notions of rights, whose ongoing expansion is in proportion to their vagueness and unworkability.)

Christians are deeply troubled by the liberal approach to abortion, which is increasingly irresponsible. And indeed, abortion is just one aspect of Christianity’s general incompatibility with the advance of liberalism in America. Thus, Immanuel Christian School, where Vice President Mike Pence’s wife, Karen Pence, is an art teacher, recently came into conflict with the nearby Sheridan School, a liberal private school in D.C. The conflict concerned a student basketball game. Sheridan School head Jessica Donovan explains:

Since the majority of students wanted to play, we were initially planning to go to ICS with the student-athletes wearing a statement of support (such as rainbow socks or warm-up jerseys). As we talked more, we understood that some students did not feel safe entering a school that bans LGBTQ parents, students or even families that support LGBTQ rights. Forcing our children to choose between an environment in which they feel unsafe or staying home was not an option. So we decided that we would invite ICS to play all of the games at Sheridan. Since ICS declined our offer to host, we will only play our home games and will not go to ICS to play.

Seeing as the students and the teachers at Immanuel Christian School, in keeping with Christian doctrine, consider homosexuality to be a sin, and don’t condone transgenderism, either, it hardly would have been wise to wear “rainbow socks or warm-up jerseys” to the game. The Christians would have perceived it as an affront or provocation. Besides, why bother with such “a statement of support”? Must youth sports, too, be politicized? Needless to say, the stuff about students not feeling safe is ridiculous. Unthinkable in any all-male or male-dominated context, where it would be fiercely derided, it represents the excessive (maternal) influence of women, from which no area of our culture is free.

In an article in The Federalist, James Wesolek describes the new bills in Texas that would “force religious homeless shelters, colleges, and universities to allow biological men to sleep next to women. This includes in shelters for abused women and small dormitories.” One might think the bills are unlikely to be passed, but as Wesolek notes, the practices they enable are already happening in Alaska. Texas, moreover, is not the conservative stronghold it once was, and if the government doesn’t limit immigration at the southern border, it may never again be.

would allow the government to punish counselors, marriage and family therapists, psychologists, or any other mental health providers licensed by the state who help people from a Christian perspective. If these providers in any way discourage homosexual behavior, or the desire for a “gender transition” (including at the request of the client), they would face disciplinary action by a regulatory committee.

From an historical point of view, this hostility to America’s founding religion is quite strange. Such legislation against Jews and Muslims would never happen. It is as if Christians were being punished for their unique generosity and hospitality to out-groups.

Where Christians seek to realize their values, gays and transgender persons perceive discrimination. Where gays and transgender persons seek to realize their values, Christians think they are being discriminated against. Academics and intellectuals, inhabiting a delusional realm of abstractions that are not put to the test of experience itself, pretend that cultural diversity is a strength, but such inevitable group conflicts betray what it really is: a massive liability.

From secondary schools up through Christian colleges and universities, participation in athletic conferences, academic accreditation, and funding are all threatened by gay and transgender interest groups, who find the institutions insufficiently “inclusive.” Private businesses face the same problem, and not every Christian fares as well as Jack Phillips, the Christian baker whom the Supreme Court ruled did not have to bake a cake for a same-sex couple. (In fact, Phillips’ troubles are not over; the Colorado Civil Rights Commission has filed a second complaint against him, this one having to do with a transgender person for whom he declined to bake a cake, also on religious grounds, and “Masterpiece II” could reach the Supreme Court, which ruled against Colorado last June.)

Showing no sign of slowing down, all this hostility to Christianity should be expected to continue apace. “The best way to engage with others is through respect and dialogue,” says Jessica Donovan. Such easy, happy talk functions to obscure the difficult, unhappy truth: that the conflicts between Christians and gays and transgender persons have no logical solution. Incompatible values are precisely that, and in Max Weber’s words, “the various value spheres of the world stand in irreconcilable conflict with each other.”

So, Christians who hope to preserve their values had better be prepared to fight. “In politics, as in life generally, the most important thing by far is Will,” I wrote in last week’s column. Unfortunately for the future of their religion, many Christians are lacking in Will. We saw this last week, when the young men of Covington Catholic High School were thrown under the bus by various Christian journalists, public intellectuals, and the Covington Diocese. As Henry David Thoreau wrote, “O for a man who is a man, and…has a bone in his back which you cannot pass your hand through!”

Yet Will is not all that is needed. It is primarily manipulation, the more unscrupulous the better, that decides power struggles in this world. Christians, then, may wish to pray for a little sympathy from the devil.