The Ghetto’s on Fire—Let It Burn 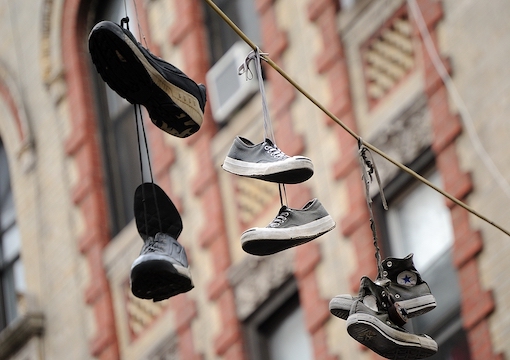 Last week marked the 78th anniversary of the Warsaw Ghetto Uprising, a sacred moment in Jewish history. The anniversary brought the expected flood of commentaries and social media posts. But one piece that was not widely circulated, though it deserved to be, is a 2013 Haaretz essay by Holocaust survivor and author Eli Gat. Gat’s thesis is that the roughly 56,000 remaining inhabitants of the ghetto, who were alive specifically because they’d proven their worth (as outlined by Goebbels in his diary, the plan from the get-go was to liquidate the useless eaters but keep the productive), were needlessly sacrificed by a small coalition of militants who purposely initiated a suicidal armed conflict with the Nazis—which ended with the ghetto’s destruction and as many as 13,000 Jews killed—in the belief that dying while fighting back against the oppressors was preferable to living in servitude to them.

Gat’s beef is one of ethics, not historiography: Did the 400 fighters who decided to burn it all down have the right to make that decision for the 56,000 who clung to hope?

A small number of ghetto militants rebelled because they believed they were living in an oppressive hellhole in which freedom, equality, and the chance to live would never be granted by the racist oppressors who’d killed their parents and children, and who now wished to kill them. The oppressors could not be reasoned with or lived with. In the absence of hope, what remained but to fight back? And if fighting back meant sacrificing the lives of other ghetto residents—so be it. Better they die because of the actions of their brothers than at the hands of their persecutors.

To be clear, the ghetto fighters were correct in their assessment. They were living under an oppressive power that would never have granted them freedom or equality. This oppressive power had killed their parents and children. There was no reasoning with this oppressive power. And even though the remaining ghetto inhabitants had indeed bought themselves some time via their productivity, the militants were not unreasonable in their belief that the reprieve was temporary (Gat echoes my thesis that in 1943 the Nazis ended their extermination program, but that’s beside the point as the ghetto fighters wouldn’t have known this and thus had every reason to believe the exterminations would be ongoing).

So a small number of people decided that burning the whole thing down was the only reasonable option.

Now, what if the righteous fury felt by those ghetto fighters could be reproduced artificially? Inorganically. Not justified by circumstances, but lab-created.

We know for a fact that humans quite often feel unjustified righteous fury. Were that not the case, there’d be no crimes of passion, only crimes of self-defense. People become homicidally enraged for irrational and invalid reasons every day. To harness that human flaw and turn it into a mass movement is to marshal atomic-bomb-level destructive power.

1619 is not the year that defines the present moment; 1943 is. Artificially re-creating that April 1943 ghetto fighter fanaticism in the minds of American blacks is the goal of a small but committed group of zealots in politics, academia, Hollywood, and the press. The endgame is to get blacks to feel exactly as those Jewish fighters did. “You’re being crushed by an oppressive power; freedom, equality, and the chance to live will never be granted. The racist oppressor seeks your death at every turn. This oppressor killed your ancestors and kills your children. This oppressor cannot be reasoned with or lived with. In the absence of hope, what remains but to fight back? And if fighting back means sacrificing your own ‘people’—so be it.”

It’s not necessary for this message to penetrate the entire black community. Remember Gat’s arithmetic: 400 made the fatal choice for 56,000.

It’s April 1943 Warsaw if the looming specter of death had been imaginary and the oppression completely fabricated and if as the ghetto fighters yelled, “Death to the Nazis!” the Nazis yelled back, “Yes, death to us!”

Every minute, the average American is bombarded with messaging from the news media, from Hollywood, from D.C., that’s specifically geared toward cultivating and promoting this Warsaw 1943 mindset. Blacks are being murdered by whites daily! Blacks have no freedom, no options, no chance! You cannot reason with a white. They’re born hateful and the hate is baked into their DNA and visible in their every action. Where too many whites are present, it’s only because blacks have been forcibly kept out. Every “space” occupied by a white is a space stolen from a black. And wherever blacks live in large numbers, uniformed whites hunt them down like animals.

So of course blacks don’t give a damn that one ghetto gilt was about to stab another. What matters is that a uniformed gestapo entered the ghetto to genocide an inhabitant. A thousand Ma’Khia Bryants are justified if their deaths can lead to the personal destruction of just one white cop, one “oppressor.” Jews commemorate the Warsaw Ghetto Uprising for the fact that a small number of German soldiers were killed by the resistance. That’s the important number, not the 13,000 Jews who died in the process or as a result. It’s the German casualties that make the event worth remembering.

Blacks and whites sporting a wholly unjustified Warsaw Ghetto mindset (blacks seeing themselves as martyrs fighting evil and whites seeing themselves as evil that deserves to fall to martyrs) cannot be reasoned with. We live in a time of peace, but in their minds, they’re at war. And ironically it’s exactly that imaginary war that genuinely disturbs the peace via unchecked black crime.

In an unusually honest paper in last fall’s Journal of Criminal Law & Criminology, George Soros minion Daniel Fryer of the University of Michigan Law School straight-out admitted that the “progressive prosecution” movement he helps front will cost the lives of many blacks. Fryer—who is black—wrote that his “reforms” will not only “negatively affect black individuals” but will harm “black communities” as well. Fryer concedes that criminal justice “leniency is sometimes regarded as the common way in which a state expresses that black lives don’t matter.” “Under-enforcement,” as Fryer phrases it, leads to the death of blacks at the hands of black criminals.

“The protection of black victims does not make a single appearance in (Stanford University Professor David) Sklansky’s Progressive Prosecution Handbook,” Fryer notes. Progressive prosecution policies “have the potential to do more harm than good” in the black community.

Yet even after acknowledging this truth, Fryer concludes his paper by giving credence to the idea that “to imagine a more humane and just society, then, perhaps we need to stop worrying about correcting the system and work to destroy it.”

“I don’t think we’re there yet,” Fryer ruefully declares. The “abolition” of incarceration and the “dismantling” of the criminal justice system must be “gradual.” But it must nevertheless be the goal.

Fryer knows that dismantling law enforcement and criminal prosecution harms blacks. And yet he says do it anyway because the system must burn.

So you have law professors like Fryer admitting that black collateral damage is a worthwhile price to pay for burning down the system, and delusional street soldiers convinced that they’re gonna die anyway so they might as well go out fighting.

And a bunch of whites who play into the “Warsaw 1943” fantasy, cheering it on at their own expense.

The response by mainstream conservatives to this lunacy has been lacking. Jesse Watters and Tucker Carlson recently led off with separate monologues about how these racial delusions are fostered because “Democrats want more votes.” That’s just dumb (to be fair, I don’t think Carlson’s dumb; I just think he understands that there’s a line he can approach but not cross). None of this is about “votes.” If it were, there’d be no reason to continually sow racial discord in a solidly blue state like California. There’d be no reason to push decarceration and progressive prosecution here. California’s remaining blacks are solidly Dem (as is most of the state). So how does loosing anarchy “win votes” for Democrats? They already have the votes.

“Democrats want votes” is an asinine explanation for the “burn it down” pathology. But it’s a safe explanation. A less sanitized one is that a small number of people want to murder-suicide the West. Civilization destroyers like Soros…people who, in more cases than not, share DNA with those Warsaw fighters. These people set in motion a mass psychosis and a system of reward/punishment for believers/skeptics that soon enough won over the stupid, angry, and opportunistic.

Ironically, the likely winner in this scenario will be America’s growing Hispanic population. Whites who still have their wits about them are surrounded by blacks who think they’re being genocided and who’ll burn down their city and yours to stop it, whites who are convinced they’re genociders who must be stopped even at the cost of their lives or yours, Jews who may have baked up this meth but who’ve started smoking it too, throwing their own to the criminal savages in cities like New York and decrying neighborhoods and school districts for being “too Jewish,” and Asians who can’t bring themselves to criticize blacks no matter how many of them get beaten and killed by blacks.

Hispanics seem to be the only group that’s not down with the whole suicide thing. The only group with a focus on growth rather than self-destruction. And while that growth is surely a mixed blessing (and that’s putting it mildly) for the nation, pragmatic whites might just come to realize that throwing in with a non-suicidal population is a better deal than trying to deprogram those lost to 1943 ghetto fighter dementia.

Those unafflicted with that dementia will need to stand up to those hell-bent on self- and community immolation. In actual 1943 such fanaticism was justifiable. In faux ’43, the fanaticism is not a response to danger…it is the danger. And the 56,000 have a duty to stamp out the 400 before they turn everything to ash and rubble.