The Gospel of Gay Imperialism 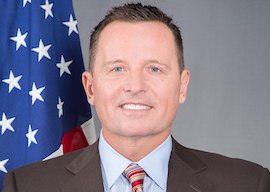 I trust that some of my Takimag readers, following my writing as they do on Twitter, have read my recent appreciation for the Trump administration’s project of gay imperialism, published on Feb. 21 at Spectator USA. It was with profound pleasure that I wrote the following words:

Dark days these are, but still the good Lord provides hope—not that we wretches deserve it! On Tuesday, Josh Lederman of NBC News reported:

The Trump administration is launching a global campaign to end the criminalization of homosexuality in dozens of nations where it’s still illegal to be gay…a bid aimed in part at denouncing Iran over its human rights record.

US Ambassador to Germany Richard Grenell, the highest-profile openly gay person in the Trump administration, is leading the effort, which kicks off Tuesday evening in Berlin. The US embassy is flying in LGBT activists from across Europe for a strategy dinner to plan to push for decriminalization in places that still outlaw homosexuality—mostly concentrated in the Middle East, Africa and the Caribbean.

A hawk who is respected for his work with the supreme warmonger John Bolton, Grenell is a splendid choice for this divine mission. Listen to the good man himself:

While a student at Evangel University, a Christian liberal arts college in Missouri, I was taught by biblical scholars that all truth is God’s truth, no matter where it is found. The truth for LGBT people is that we were born gay.

The editors of Commonweal, the superbly progressive Catholic magazine, could not have put it better themselves. A few told me they wished they could have joined the ‘LGBT activists’ at the ‘strategic dinner,’ which was followed by a lively night at Berlin’s most inclusive night club. [Condoms and K-Y Jelly, it was later learned, came with the price of entry.]

Meanwhile, subsequent events have given us further cause to rejoice, for Grenell and the other LGBT activists will be aided by the best and the brightest gays of all, the Catholic Church. Ah, just when we thought there was no future for Christianity in the West!

“Ah, just when we thought there was no future for Christianity in the West!”

For this we must thank Andrew Sullivan. Regarding Frédéric Martel’s new book “on the gayness of the hierarchy at the top of the Catholic Church,” Sullivan wrote in his Feb. 22 column in New York magazine:

The picture Martel draws is jaw-dropping. Many of the Vatican gays—especially the most homophobic—treat their vows of celibacy with an insouciant contempt. Martel argues that many of these cardinals and officials have lively sex lives, operate within a “don’t ask, don’t tell” culture, constantly hit on young men, hire prostitutes, throw chem-sex parties, and even pay for sex with church money.

[A]s Martel probes deeper and deeper, one theme emerges very powerfully: “Homosexuality spreads the closer one gets to the holy of holies; there are more and more homosexuals as one rises through the Catholic hierarchy. The more vehemently opposed a cleric is to gays, the stronger his homophobic obsession, the more likely it is that he is insincere, and that his vehemence conceals something.”…

Upon reading these words, President Trump’s most accomplished advisers, Jared Kushner and Ivanka Trump, were filled with enthusiasm. They quickly decided to enlist the Catholic Church in spreading the gospel of gay imperialism. The Christian contribution is to be led by Francesco Lepore, whom Sullivan describes as

a brilliant young gay Latin translator and priest. He soared through the ranks, directly serving Popes Benedict XVI and Francis, until, as a gay man, he found a way to quit his post because he couldn’t abide the double life he was forced to lead, or the rancid hypocrisy of the whole system. He says he saw everything from the inside. “He has had several lovers among archbishops and prelates; he has been propositioned by a number of cardinals…an endless list.”…

Seeing as Lepore’s credentials are beyond dispute, the Pope appointed him Homosexual Commissar. Although that induced a little jealousy in Richard Grenell, it is nonetheless heartening to see the Trump administration finally become progressive. Indeed, what with the increasingly neoconservative foreign policy, the emergency funding bill, and the repeated calls for record levels of immigration, it is evident that Trump has betrayed his deplorable white working-class base. Let us hope these pesky persons will soon be dispossessed by migrants of color. In the meantime, Americans should look forward to the future, and learn to equate the words China and Chinese with the word boss.

Energized by all this good news, I took to the streets of Philadelphia this week to get the public’s reactions. First, I went to the University of Pennsylvania, whose commitment to intersectional resentment has long inspired Philadelphians and the nation generally.

The sight of a young woman with blue hair, a septum ring, and a shirt that read “Revolution has no borders” suggested an enlightened interlocutor. Nor did she disappoint, although her putrid breath almost made me faint. Asked her opinion on the Church’s role in disseminating gay rights, she exclaimed: “It’s only fair! Sexual orientation exists on a spectrum. For instance, some days I’m really attracted to my pet ferret. Other days I prefer my girlfriend. Fortunately, we’re polyamorous, and she accepts me for me.” She then took a chicken bone out of her coat pocket and began gnawing at it casually, as if it were a stick of gum or a breath mint.

I had just begun to contemplate her wise words, while admiring the generosity of this creature who offered me a bite of her bone, when a young man—tall, white, and broad-shouldered, with a MAGA hat on to boot—spoke up from behind: “Those fags in the Church should give up the charade and come clean—membership would boom. I’d say send them all to prison, but that would be only a continuation of their buggery.”

At this the young woman let out a loud shriek. In response, a siren began to blare, and the wicked young patriarch fled in terror from the Diversity Swat Team’s Pink Brigade that descended upon us. I myself was nearly run over by those professional activists, a fearsome bunch who left behind them a rainbow trail of glitter and purple lace.

Next I went to a dive bar in Frankford. There I struck up a conversation with a middle-aged white man, a plumber and veteran. What did he think about the U.S. bringing the gay light to dark Iran?

“To tell ya the truth, I always thought those towelheads were faggots. I mean, beatin’ women and killin’ ’em ’cause they show some skin? What man doesn’t wanna look at women? Fuckin’ homos!”

Such vulgar insensitivity, coming after the Penn incident, was too much for my delicate nature to bear—I promptly left the bar in disgust. On the train back to my apartment, I took out my cell phone and went onto the The Guardian’s website, that model of forward-thinking journalism. All of a sudden, it was as if the day’s horrors had never happened! Not only was I reminded that the Trump administration was committed to enforcing gay rights at gunpoint in foreign lands; Sam Harris, the acute critic of Islam and religion in general, as well as Steven Pinker’s only rival among public intellectuals, would be lending his genius to the mission. After all, as Andrew Anthony writes in The Guardian,

Harris insists he’s concerned about social justice and says that if we want to converge on what’s fair we must “step outside of our identities.”

[A]s a longtime exponent of meditation…Harris has a side to his character that…makes him look less like a New Atheist than some Californian New Ager. [H]e tells…[us] that there is “a place for the sacred in our lives.”

And to think some have deemed Harris just another naive rationalist, a science idolater, a predictable type living unawares in “the shadows of God,” as if his liberal values were justified by reason in some deep sense; a smug and contemptible American blue blood who, as Anthony notes, dawdled through his adult life “supported by his parents, the actor Berkeley Harris and the TV producer Susan Harris, who created The Golden Girls”!

“We need,” Harris declares, “to live our lives with more than just understanding fact.” Thus, Anthony writes, “Harris, no slouch when it comes to the commercial possibilities of new tech, has just released a meditation app.” What is more, it is through the sacred Sam Harris meditation app, along with the efforts of the Catholic Church working with the LGBT activists, that the backward Arabs, Africans, and Caribbeans shall be converted to the progressive-globalist religion, whose summum bonum, of course, is universal human rights. Therefore, the savage Muslims shall finally end their jihad, and Iran and the rest of the Arab world shall become as virtuous as the Kardashians.