The Trump Presidency: A Tragicomedy 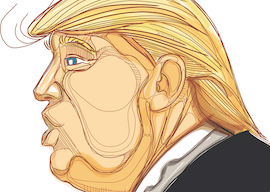 The greatest value of democracy is negative, consisting in the fact that stupidity is less to be feared than evil. Or, to say it another way, though it can and often does make for much evil, stupidity is generally a lesser evil than evil itself. Democracy may be so much bungling and gridlock, but by dividing power among elected representatives, it does at least minimize the harm men can do more than nondemocratic forms of government.

To be sure, the Founders meant for this country to be not a democracy, but what is far better, a constitutional republic. Indeed, it is the wisdom of our Constitution that it is meant to prevent the historical fate of democracies: degeneration into mob rule and tyranny.

Yet whatever America now is, most of our politicians are not doing a good job, due to stupidity and other vices: ambition, greed, cowardice, conformity. The general incompetence is most evident in the immigration issue. Immigrants compose 13.5 percent of the U.S. population; 3.3 percent are illegal. A million immigrants enter the country each year, most of them legally. And, as Ron Unz notes at his webzine,

If we exclude a relatively small portion of the most highly-skilled legal immigrants, the remainder are probably not all that different in their characteristics from their undocumented [sic] counterparts, and indeed individuals may often shift back and forth between these two categories over time, as illegals gain green cards or legals remain here after their temporary visas expire. The ubiquitous rhetorical focus on illegal immigrants seems mostly due to a mixture of “political correctness” and political demagoguery, supplemented by sheer ignorance.

There are several reasons why we need to stop illegal immigration, and build a wall to that end, but the main issue, it is important to understand, is low-skilled immigration: Besides the loss of industry, that is what is keeping wages low for working-class Americans.

Both legal and illegal immigrants are much more likely to use welfare than the native-born. We now have a $22 trillion national debt. Social Security and Medicare, our primary entitlement programs, will soon be insolvent. Still, we continue to waste money on foreigners.

Does President Trump understand the immigration issue? If so, he evidently doesn’t care about it. During the recent State of the Union address, he said, “I want people to come into our country in the largest numbers ever, but they have to come in legally.”

That disturbing remark was followed by this exchange with a reporter the next day:

Reporter: Last night, you said in your SOTU address, “I want to come into this country in the largest numbers ever.” Is that a change in your policy?

Reporter: So, you’re changing your policy officially, then? You want more legal immigration?

Trump: I need people coming in because we need people to run the factories and plants and companies that are moving back in. We need people.

“Does President Trump understand the immigration issue? If so, he evidently doesn’t care about it.”

Suddenly it’s as if the president were a neocon. He seems about as sincere as Ben Shapiro hocking underwear during his podcasts. Perhaps he was trying to win over some Democrats in Congress and democrat and centrist voters. If so, that’s a very risky strategy, as it’s likely to alienate his white working-class voting base.

There are roughly 50 million working-age people—both native-born and foreign-born—who have dropped out of the workforce. Some are bums, but not all. And even some of the bums would surely fill the jobs in “the factories and plants and companies that are moving back in” if, America having less low-skilled labor, these companies were pressured to pay workers higher wages. The idea that we need immigrants to do those jobs is not only false; it’s a betrayal of Trump’s supporters.

The vast majority of workforce dropouts are men. For the sake of the debased American family, it’s absolutely essential that they, and working-class men in general, have access to better-paying jobs. Women rarely marry down; for sensible reasons, they want to marry up: ideally to high-status men, and failing that, to middle-class or respectable working-class men. Insofar as men decline in sexual market value, they will be undesirable to women. This has long produced, and shall continue to produce, many social problems, at the expense of taxpayers.

Although the president understandably wanted to avoid another government shutdown, and therefore compromise with the Democrats in hopes of getting his wall, the emergency funding bill represents a failure. Says John Derbyshire:

It contains some meager funding for border fences in crucial places on our southern border; but the local authorities in those places are given a veto on the actual building of the fences! Since all the jurisdictions concerned are, at best, deep-blue Democrat, and at worst, bought-and-paid-for by the Mexican smuggling gangs, there will be no fences.

Rachel Bovard is also worth quoting here. “Instead of being processed at the border,” she writes,

asylum seekers will be placed in an Alternatives to Detention program—funded at $40 million in the bill—where they are moved to the interior of the country, and usually let go, pending a court date. So much for ending “catch and release.”

Worse yet, the bill creates a pernicious new incentive for illegal immigration and child trafficking. Under section 224 of the bill, the federal government is now prohibited from detaining or deporting any current sponsor, potential sponsor, or anyone residing with, an unaccompanied minor (UAC).

All this when the border wall is not even the main issue regarding immigration! Nevertheless, expect a massive waste of time and energy. Expect the Democrat-controlled House of Representatives to claim the emergency is over, a belief that the Republican-controlled Senate may dispute. The matter may wind up at the Supreme Court. It will probably be years before the wall is built, if ever. It is all quite laughable. It is tragic above all.

Then there is Venezuela. Although there’s a compelling case to be made for giving humanitarian aid to that unhappy country, it’s not in our interest to intervene in its affairs, thereby coming into conflict with our most powerful geopolitical rivals in order to install “democracy” there. Trump’s supporters voted for him in part because they don’t want America to incessantly police the world. The involvement of John Bolton (now agitating for war with Iran) and Elliott Abrams—two typical warmongering neocons—in Venezuela suggests that here, too, Trump is selling out.

Not only that, the conduct of his administration in regard to Venezuela has been utterly immoral. The Trump administration put Juan Guaidó in control over government bank accounts based in the U.S. and imposed sanctions on Venezuela’s oil sectors. In response, Nicolás Maduro, who refuses to give up power, has blocked our aid. Thus, as usually happens when we meddle in other nations, the poor are suffering, and will suffer more still. And for what? We don’t need Venezuela’s oil. Besides, the more misery we wreak in foreign lands, the more refugees we and other nations have to deal with.

Another problem is that the Trump administration is expending too much money on foreign aid around the world, as if America’s wealth were manna from heaven. What’s needed is massive government investment in high-tech jobs here on American soil. Without this, we will likely be surpassed by the ruthlessly efficient Chinese.

Another good idea is government-funded vocational schools, particularly in the struggling interior of the country. As I argued in last week’s column, it’s unrealistic, and harmful to the academy, to continue to expect everyone to go to college.

Finally, the government should devote resources to creating more colleges like Hillsdale and St. John’s. The leading brand names—Harvard, Swarthmore, Stanford, and the like—are past reform and immense liabilities. We need new institutions of higher learning simply to counter their awful anti-American and anti-Western influence, to say nothing of preserving intellectual standards and keeping the nation competitive internationally.

The failures of the Trump administration shouldn’t surprise anyone. They’re merely what is to be expected from a democracy, human nature being what it is. Although still vastly preferable to Hillary pay-to-play Clinton, Trump has shown that he’s inadequate. Only a Trump partisan, as opposed to a disinterested mind, could fail to see that. It is time to start thinking about a new Republican candidate for the 2020 presidency. In my dreams, Tucker Carlson would run, the man having aged into a kind of Buchananite nationalist.