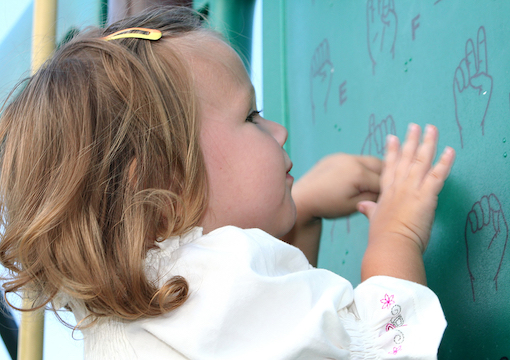 The FDA’s approval in 1990 of cochlear implants that enable some of the deaf to hear set off a political struggle. On one side were the hearing parents of deaf children, who tend to assume that five senses are better than four. On the other were deaf civil rights activists who saw technological fixes for an identity they didn’t view as needing repair as stigmatizing and even genocidal toward “Deaf culture.”

Curiously, this clear predecessor of the Great Awokening, the promotion of deafness as equal to hearing, has never quite taken off the way crazier manias such as transgenderism have. Sympathy for the deaf would seem natural, but other identity groups attract more allies these days.

The high points of deaf activism were the 1988 and 2006 student strikes at federally funded Gallaudet University for the deaf in Washington, D.C., over plans to appoint as president persons not fully fluent in American Sign Language.

“Sympathy for the deaf would seem natural, but other identity groups attract more allies these days.”

In contrast to residential schools for Canadian Indians, which are now the worst thing ever, boarding schools for the deaf are prized by activists as the font of deaf culture because it’s where deaf children can talk to each other in sign language. Yet, deaf militance over the cochlear menace appears to have faded somewhat in recent years even at residential schools. (By the way, in this article when I use “deaf,” I’m referring only to those who were deaf as children, like Helen Keller, not adult-onset deaf people like Beethoven.)

I hadn’t thought about deaf demands for a while until reading geneticist Kathryn Paige Harden’s new book The Genetic Lottery in which she enthusiastically cites, perhaps to show that eugenics can be Woke, two deaf lesbians who are trying to find a congenitally deaf sperm donor to help one of them conceive a deaf child for, as they say, the culture.

Then I was reminded again by a New York Times op-ed “Fear of a Deaf Planet” complaining that hearing people don’t learn sign language. But even that was phrased in less abrasive language than the typical identity-politics manifesto:

Rather than a purely curative focus, we should be attempting to eradicate the stigma that surrounds hearing loss.

Much of the argument for spreading sign language would seemingly fit in well with current obsessions such as remodeling American society, the Spanish language, and human nature in general to suit the whims of the differently gendered.

And yet, I was struck by how seldom lately we hear about the deaf community and their fears of eradication by technological progress. Not long ago, Deaf Replacement Theory was a big deal among the deaf, but it has gotten drowned out by more fashionable identities.

Indeed, the Times’ commenters were largely dismissive, brusquely pointing out that learning sign language is time-consuming, and that the deaf are a small minority so why should they get special consideration when there are more practical projects to undertake? Empathy for the deaf is not a high priority these days, evidently.

It’s useful to think about why there is deaf culture but not blind culture. Wikipedia’s article on the former is vastly longer than its short squib on the latter, which sums up, “…blind people integrate with the broader community and culture, and often do not identify blindness as a defining part of their culture.”

That’s because language can be essential to identity. Just as nationalism in Europe was an offshoot of the consolidation of local spoken dialects into a standardized national written language (such as the French government’s imposition of the Parisian dialect on its sprawling domain), deaf culture exists due to the consolidation of sign languages.

Language is fundamental to communication, of course, and perhaps even to thought. So life tended to be extremely difficult for those born deaf, especially if they didn’t work out an idiosyncratic sign language with their families.

The term “dumb,” as in “deaf and dumb,” referred to an inability to speak, but it has the connotation of stupidity as well. In some cases, this was the bigotry of the times, but it also connoted an unfortunate tendency: Children who miss the language development window can wind up cognitively impaired for life. How do you carry on a monologue in your head without words? Granted, some people get by fine in life without talking to themselves silently. But, in general, it’s a necessary useful skill.

Fortunately, there exist sign languages. According to neurologist Oliver Sacks, many signers conduct their internal monologues by picturing fingers moving in their mind’s eye.

Fairly sophisticated sign languages can more or less spontaneously arise in communities with a high percentage of congenitally deaf children due to inbreeding, such as on 18th-century Martha’s Vineyard (which the deaf movement sees as its utopia because deafness was so common that the hearing learned the local sign language too), or in the Al-Sayyid Bedouin village in modern Israel. But for most rural deaf children without a critical mass of neighboring signers to interact with, lack of language development could be a lifelong impediment.

Europeans began formally documenting sign languages over the last few centuries, and in the West, most deaf children now have access to a well-developed system of signs.

Strikingly, a sign language can be orthogonal to the local spoken language. For example, American Sign Language is not speaking English with your fingers. It’s not English at all. Thus, when in England, ASL signers are as linguistically isolated from British signers as English-only speakers are when trying to talk to the French. Instead, ASL is an offshoot of French Sign Language, so American signers can communicate with the local deaf when visiting France.

Indeed, deaf activism is rather reminiscent of the successful effort by French Canadiens in the late 1960s to protect their language identity by wringing major concessions from the Canadian government. Was that progressive or defensive?

Likewise, ASL-only speakers can be highly protective of their culture, and some fear its eradication by cochlear implants, somewhat as many lesbians fear that the current popularization of sex change therapies among butch girls threatens the long-term existence of their sexual orientation.

It remains puzzling why deaf identity, like lesbianism, is not in fashion in a time of fervent identity politics.

One possibility is that the deaf, due to their speech difficulties (not to mention their lack of musical ability), are not cool in the age of TikTok.

Moreover, the deaf are perhaps not as articulate in writing on average. IQ studies tend to find that the deaf have some advantages in visuo-spatial reasoning, rather like the blind are more likely to have perfect pitch. But the deaf tend to lag in memory-related skills. Sign languages are a blessing, but they are perhaps not as efficient for some mental purposes as speech languages.

Much of the current transgender fad is enabled and even inflated by parents who think they are doing their children a favor. But, outside of a few hardcore deaf culture fanatics like Harden’s lesbians (and they are rare because a large majority of deaf children have hearing parents), most parents see deafness as a misfortune they wish to alleviate. And doctors can make honest money doing cochlear implants.

Hence, over time, there are fewer deaf children.

On the other hand, who knows what bad ideas might get spread next on social media? For example, beside deciding they are boys, moody teenage girls have lately been coming down with fake Tourette’s syndrome ever since a YouTube influencer in Germany got big on the internet in 2019 by exaggerating his affliction.

Deafness is not in style at the moment, but never say never these days.