The Guilty Bystanders of Racial Divisiveness 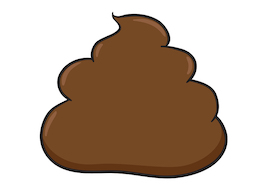 For today’s sermon, I shall read the Parable of the Crip Who Slipped in Shit.

My high school friend Mark was a hardcore gangbanger, one of the hundreds who “attended” our school (“attended,” as in, ditched most of the time). He loved to proudly display his many battle scars. I’d always suspected he had a touch of CIPA, the hereditary condition that lessens one’s ability to feel pain. Yet Mark, in my presence at least, was strikingly good-natured. Even with his propensity for violence, I’d frequently mess with him with no fear of repercussion. Strange as it may seem, we were very good friends.

One day, shortly after graduation, Mark and I accompanied a mutual friend named Robert to Westwood Village, for what purpose I don’t recall. What I do recall is the large, fresh, and most unpleasant pile of dog excrement that some careless canine owner had left outside the store that was our destination. Mark loved playing the part of “friendly black guy who’s totally not a gangbanger” (he was well-kempt and had better diction than most white kids I knew). Spying a group of elderly white women heading down the sidewalk, Mark decided to play traffic cop and direct them around the stinky mess. “Watch your step, ladies! You wouldn’t want to slip in that, you might hurt yourselves.”

The old biddies beamed with joy (such a helpful black youth!). They thanked him profusely (as Robert and I rolled our eyes), and Mark, chin raised with pride, joined us for whatever meaningless chore we’d come to accomplish.

Some twenty minutes later we emerged from the store and headed back to Robert’s car. I remembered to avoid the pile of crap. Robert remembered to avoid the pile of crap. But Mark? Well, I’d never seen anything more cinematic than what transpired next. Walking jauntily with a spring in his step, smiling widely, his thoughts on everything but what sat on the sidewalk in front of him, Mark plowed right through the mountain of feces that only minutes earlier he’d been directing people to avoid. His right foot slid forward, his leg kicked out—much like a Rockette—and he became briefly airborne, landing squarely ass-first in the pile of poop.

Oliver Hardy could not have executed a finer pratfall. To this day I swear I heard a slide whistle in the distance.

I never let him forget that little episode. I told the story endlessly to all who’d listen, to the point where Mark would run into random strangers who’d hear his name and say, “Oh, you’re that idiot who slipped in shit!” That’s the danger of having a raconteur as a friend; your misfortunes become our anecdotes (generally speaking, raconteurs are dicks). Many times, Mark would plead with me, “Will you just let it die? Will you just let it go? How long are you going to keep making that story the defining moment of my life?”

Enjoying his frustration, I would reply, “Hey—I didn’t make you slip in shit. I don’t create the news, I just report it. I’m not to blame. I wish I didn’t have to keep talking about it, but it’s an issue that won’t go away.”

An understandably flustered Mark would respond, “It won’t go away because you won’t let it go away. Nobody would be talking about it if you didn’t keep bringing it up!”

I’ve told this story to make a point. What I did to Mark is what race hustlers do to all of us every day of the week. The key to being a leftist race-baiter with front-page pieces on Salon, Slate, HuffPost, etc., is to keep talking and talking and talking about race, while at the same time removing yourself from the equation, absolving yourself of all responsibility for our “racially divided” society.

“Most humans know when they’re the victim of hate or oppression; we don’t need media hacks to point it out to us.”

“Hey—I’m just talking nonstop about race because it’s the issue that won’t go away.” Well, maybe it won’t go away because you keep talking about it nonstop.

Let me reach back a few years for one of my favorite examples of this pathology. It was April 2004, and pre–Hitler Trump’s Apprentice TV show was down to its final two contestants, one white, one black (Bill and Kwame…do I need to point out the black one?). Kwame ended up losing, mainly due to his inability to control his destructive and incompetent team member Omarosa, whose shenanigans severely hobbled their projects.

A black dude made it all the way to the final two, and he lost. So therefore, racism! Entertainment Weekly’s Ken Tucker, who is white and a moron (I’d call him a half-wit, but that’s crediting him with 50% more wit than he deserves), decided to sit down at his trusty keyboard and suss out why the defeat was due to racism (because that’s today’s “rational” leftism: conclusion first, then drum up your evidence). His “findings”? The Harvard-educated Kwame was unaware that bosses have the power to fire people (a power he had, but failed to use, regarding Omarosa). See, Tucker explained, Kwame had never been given the “white rule book.” Privileged whites grow up knowing what firing is, but underprivileged blacks who’ve never known power can’t comprehend the concept of “firing” (wait, I thought underprivileged blacks are always being fired by racist white bosses. Wouldn’t they know the meaning of “fired” by having been on the receiving end of it?).

The thing that’s truly fascinating is how this cretin framed his argument in terms of “Hey, I’m just saying what we’re all thinking! I’m not creating the story, I’m merely reporting it.” The “black people don’t know what firing means” theory was his and totally his, the product of his lunatic mind, but he couldn’t bring himself to face the fact that he was not reporting racial divisiveness, but creating it.

That goes for every other hack since then who’s written similar pieces for leftist newspapers and websites. Essay after essay about how something we never previously thought of as racist is actually “racist AF.” These pieces are always couched in faux reluctance (“I wish I didn’t have to keep writing about this, but racism is the problem that won’t go away!”), and always presented with the same avoidance of responsibility on the part of the author. No concern that perhaps absolutely no one was thinking that beards, farmers markets, food poisoning victims, earthquake warnings, and earthquake rescuers are “racist” prior to the author’s “reportage.”

What Slate charlatan Alex Ross refers to as “deep dive journalism” used to be called a fishing expedition.

Indeed, what are “microaggressions” if not an invention by identity fanatics that allows them to “see” racism in things that don’t appear racist to anyone else? If Jussie Smollett proved anything, it’s that actual, overt racial aggressions are so rare these days, fraudsters are forced to choose between inventing a microaggression (“This guy said he hates tacos…as a Mexican I feel violated. This other guy said he loves tacos…as a Mexican I feel violated”) and faking an actual aggression (as Smollett did). As I write this, a tranny named Nikki Joly is on trial in Jackson, Mich., for burning its own house down, killing three cats and two dogs (I guess they must have identified as kindling). According to news reports, Joly was upset over never having been the victim of a hate crime. Apparently, there’s so little “transphobia” in Jackson (a 71% white city that went overwhelmingly for Trump) that Joly had to invent some.

Race-hustling “journalists” like Ken Tucker and everyone at Salon, Vox, The Root, etc., are separated from the Jolys and Smolletts merely by the fact that they don’t break the law. But in spirit, we’re talking about the same animal. They invent racism and bigotry and then pretend to be mere bystanders (or victims).

Ever since Green Book dared to win Best Picture at the Academy Awards, we’ve been bombarded with op-eds and “news” pieces from pretty much every major media organ in the country, explaining why the movie is racist. Oh sure, millions of people of all colors saw the film and enjoyed it. But those who make their living through divisiveness are telling us that we didn’t actually like the film after all. And again, they’re not doing it honestly. “Honestly” would be to say, “I don’t like the fact that Spike Lee lost, so I looked at Green Book from a variety of angles, and I invented a way to rationalize that it’s actually not a good film but a racist atrocity.”

But no. The anti–Green Book pieces are presented as examples of objective reporting. “Black America thinks Green Book is racist! I’m just a casual observer.”

My favorite anti-Green Book ranter is the L.A. Times’ Justin Chang. You’re probably unfamiliar with his work, as nobody reads the L.A. Times anymore. So just to fill you in, “film critic” Chang is a leftist loon whose extremism regarding race knows no bounds. Seriously, the last time I saw an Asian with such unbridled fanaticism, he was flying his plane into the USS Aaron Ward. Chang lambasted Green Book for promoting the “shopworn ideal of racial reconciliation,” adding that he is merely speaking for the movie’s detractors.

Really, dude? The ideal of “racial reconciliation” is “shopworn”? Is that the moviegoing public’s belief, or yours? Have some guts, you coward. Admit that it’s you. You’re not “speaking” for anyone.

Chang offers a perfect example of my point. He acts like Americans are out there bitching about the terrible notion of “racial reconciliation,” when, in fact, most of us have long ago reconciled. Generally, in terms of daily interactions, we’re all getting along rather well. Sure, political correctness is a force that it wasn’t 35 years ago when I was in high school. But who’s to blame for that? Ordinary blacks? Ordinary whites? No, not at all. It’s the race baiters in the media and politics, the ones for whom stirring up divisiveness is a profession. Take them out of the equation—flush the Ken Tuckers and Justin Changs down the same toilet as the Smolletts and Jolys—and you’d see just how well we’d do without them.

They’re not “giving the people a voice”; they’re pretending to be the voice of the people. If they would find something more constructive to do with their time (like, well, pretty much anything else), we’d all be fine. Most humans know when they’re the victim of hate or oppression; we don’t need media hacks to point it out to us.

When I kept the memory of Mark’s shit-slipping alive simply because it pleased my sadistic sense of humor, I knew I was being an asshole. But I think the race hucksters who keep divisiveness alive are too far gone. I think they’ve lost all sense of introspection, all awareness of their own motivations and their own influence.

And that makes them dangerous as hell.