The Left’s War on Normal 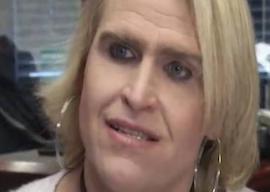 The Wire was the critically acclaimed HBO series that told the story of the Baltimore drug trade from a variety of perspectives (cops, dealers, importers, longshoremen, kids, and crooked journalists). Unfortunately, praise for The Wire all too often emanates from leftist white hipsters who’ve probably never actually seen a single episode. But the truth is, The Wire really was exceptional TV.

The reason The Walking Dead will never be remembered as “great” (popular, sure…but so was that Paris Hilton reality show a decade ago) is that its revolving-door showrunners insist on continuously repeating the same script. The heroes stumble upon a megalomaniacal postapocalyptic human with a cultlike band of violent followers. And again, and again, and again. Different names, same plot. But on The Wire, because that show was actually crafted with care and intelligence, when Baltimore drug lord Stringer Bell was killed and his partner imprisoned, the writers saw to it that the next drug kingpin would be cut from a different cloth. Bell was an organizer and an orator, a larger-than-life character with grand schemes. Replacing him was Marlo Stanfield. Marlo knew nothing of oratory. He was a dead-eyed, cold-blooded killer with no ambitions beyond ruling his hood. He wasn’t trying to bring anyone together or “civilize” the drug business. In fact, as one particular street dealer pointed out, Marlo loved “killing niggers just cuz he can, not because of business, not for profit; just cuz he can.”

Idris Elba became a star thanks to his performance as Bell, but I think Jamie Hector’s understated, coldly inhuman Marlo was an even better characterization.

In season 4, Marlo loses a good deal of money at an all-night card game. Pissed off, he wanders into a convenience store in the early-morning hours, as he waits for his lieutenant to come pick him up. As the Asian clerk isn’t looking, he swipes some candy, in plain view of the store’s paunchy, middle-aged black security guard. Marlo had more than enough money to pay for that candy, but he stole it “just cuz he can.” The guard follows Marlo outside and lectures him about disrespect and what it means to be a hardworking family man with a shitty job who has to put up with neighborhood thugs mocking him to his face.

With an iciness that’s absolutely bone-chilling, Marlo stares the guard straight in the eyes and says, “You want it to be one way. But it’s the other way.”

The security guard hates his reality. He hates his job, his neighborhood, and the “rules” of the street that reward the violent and conscienceless and punish those who obey the law. He wants reality to be one way, but in fact it’s the other way.

Marlo proceeds to get into a pricey SUV chauffeured by his right-hand man, and coolly drives off (days later, the guard turns up dead).

“You want it to be one way. But it’s the other way.” It’s a great line, and I find myself recalling it every time the left opens another front in its war against normal. Because at its core, that’s leftism. Since the days in which communists proclaimed the creation of the “New Soviet Man”—an engineered human devoid of self-interest and caring only to serve the state (oddly, the “New Soviet Man” ceased to exist the minute belief in it was no longer enforced at gunpoint)—the left has been all about trying to reinvent normal.

“These folks understand that the key to accomplishing their goals is to undermine the underpinnings of human society.”

Last week, left-wing West Wing television hack Aaron Sorkin, who’s as likely to ever create a show as timeless as The Wire as a retarded lemur with a typewriter is likely to write Hamlet, blasphemed against the left’s war on normal, by urging his beloved Democrats to stop obsessing about issues like letting men in lipstick and dresses use women’s bathrooms. “I think that there’s a great opportunity here, now more than ever, for Democrats to be the non-stupid party, to point out the difference—that it’s not just about transgender bathrooms. That’s a Republican talking point. They’re trying to distract you with that.” Needless to say, everyone from actual retarded lemur Alexandria Ocasio-Cortez to prominent gay activists to the rapidly vanishing loons who write for the Huffington Post slithered onto social media to “clap back” at Sorkin (small aside…how the fuck did that become such a widely used news-media term?). On Twitter, “progressives” took their former darling to task for being a transphobe, a homophobe, and pretty much every other phobe in the leftist lexicon.

How could Sorkin, who’s been pandering to left-wing audiences for damn near 25 years, so badly misjudge his base? Well, Sorkin is a simpleminded party-line Democrat, as uninspired in his thinking as he is in his writing. “High taxes! Big government! Welfare! Free health care! Oppose interventionism and war when a Republican is president; cheer it when the prez is a Democrat (or when a Republican president is actually against interventionism and war). Abortions for all, and don’t forget to recycle those dead fetuses in the proper green trash bin, because global warming is killing the planet!” To an extent, Dems like Sorkin are to the left what the neocons are to the right; they stick with the safe, time-tested issues, and they feign ignorance (or have made themselves purposely ignorant) of the fact that some in their circle have a more radical agenda.

In fact, to the increasingly powerful far-left wing of the Democrat Party, trannies in the bathroom is not only a defining issue, it may very well be the defining issue. When Sorkin says “it’s not just about transgender bathrooms,” the Ocasio-Cortez crowd “claps back” that in fact it’s all about transgender bathrooms. These folks understand that the key to accomplishing their goals is to undermine the underpinnings of human society: the traditional two-parent family, women who actually want to get married to a man and have kids, and traditional gender roles. Far-leftists despise the very notion of “boys” and “girls.” They’re at war with biology, they’re at war with human nature, they’re at war with reality itself.

They want it to be one way, but it’s the other way.

Unfortunately, unlike The Wire’s hapless security guard, the left has amassed the muscle to torment the rest of us by trying to alter reality by force. On The Wire, Marlo represented the reality of his neighborhood, and the security guard represented bitter, frustrated wishful thinking. Marlo had the power; on The Wire, reality always won. And in real life, reality always will win. The left’s endless war against “the way things are” is always a losing one, but that eventual defeat inevitably comes at the expense of countless lives. For most of the 20th century, the Soviets tried to beat, bully, and stomp the belief in God out of the Russian populace. In the end, reality won (it’s a simple truth that most humans believe in God, and even after seventy years of enforced atheism, Russians remained overwhelmingly Christian. These days, atheists make up a mere 13% of the population). But how many people were killed or imprisoned in the course of the left’s failed war?

Hardcore leftists have never been shy about explaining why tranny advocacy is so important to them. The ultimate goal is to “liberate” the world from traditional values and, in the words of The Guardian’s Yvonne Roberts, “reshape society.” But Roberts is quick to add that “we can’t leave change to osmosis.” Indeed not; the left always needs to resort to whatever level of force it can get away with. Here in California, we don’t have gulags (much to our state Democrats’ dismay), but we do now have a ban on saying “he” and “she” in the State Senate.

It’s very easy to think that the left is winning its war against those who refuse to accept that donning lipstick magically makes a man a woman in not only the legal but the biological sense. Academic papers arguing that “gender fluidity” is either a fad or a pathology (as opposed to a biological constant) are censored, and opposition to the tranny agenda is quashed online. And sure, there is more than a little “osmosis” going on. The number of kids who think it’s cool to identify as “fluid” is exploding, and most Americans think there are six times more trans people in the U.S. than there actually are (funny enough, although Americans think this nation is swarming with trannies, a 2013 survey found that, when asked if they’d ever met one, 89% of the respondents answered “no,” and 2% answered “I don’t know,” leaving only 9% who’d ever actually seen one of these supposedly commonplace beings). But I’m not overly pessimistic. As I wrote in a column three years ago, “Reality doesn’t care if you acknowledge it or not; reality always wins in the end.”

If I could sum up why I think the left will eventually lose this one, I’d utter two words: GameStop tranny. Last month, a deep-voiced dude with a women’s haircut, sporting hoop earrings, a pink top, and a handbag, trashed a videogame store in Albuquerque because the clerk dared to call him “sir” instead of “ma’am,” even though he’s obviously a sir. The misbegotten creature at the center of the story, “Tiffany” Moore, has tried to present himself as a hero, and many in the media have been doing their best to support him/her/it. But this is a losing battle. The truth is, Moore looks ridiculous. Leftists want us to look at Moore and not laugh, but that’s just not going to happen. Ironically, if leftists were honest and admitted that most trannies have serious mental issues, we probably wouldn’t laugh, as mocking the insane went out of style with London’s infamous Bedlam tours. We mock trannies because we’re told they’re normal, and if they’re normal—if a freak like Moore is as natural and healthy as freckles on a redhead—then they’re open to mockery, like all other normal human variations.

The more the left forces us to accept the “Tiffany” Moores as normal, the more pushback there will be. Yes, the left’s use of the force of law and the power of social-media censorship will work for a time. But suppressing something is not the same as eliminating it. Surely the Soviet Union taught us that. And a pragmatic, predictable party hack like Aaron Sorkin recognizes this. He knows a long-term losing strategy when he sees one. The Democrats’ embrace of racial identity politics is smarter, because for better or worse (and I’m not saying better), the idea of being true to your racial “kin” is rooted in nature. Trannyism is an artificial invention.

The majority of us will never allow ourselves to be forced into seeing people like “Tiffany” Moore as normal, or above mockery. To repeat the opening theme of this piece, on trannies, leftists want it one way. But it’s the other way. And in the end, Marlo, or should I say reality, will prevail.