The Lies That Sustain Us 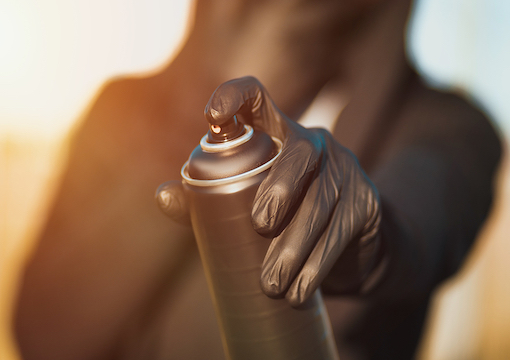 What is it that holds our country together today? Perhaps nothing so much as lies, which, in some instances, are nonetheless effective because they are known to be lies.

Something remarkable—or perhaps all too predictable, in our cynical time—happened here in the City of Brotherly Love on Feb. 15. In the middle of Black History Month, a man spray-painted racial slurs on the Cecil B. Moore mural in North Philly and at Brightside Academy and Habitat for Humanity. A civil rights icon, Moore is a big deal in this town, so people were naturally outraged.

This week the Philadelphia police released images of the perpetrator. He is a black male, young (between 25 to 35 years of age, according to police), with a medium build. He was wearing a black jacket, gray sweatshirt, blue jeans, and brown shoes, and was carrying a black duffel bag. That description fits many thousands of young black men in Philly, so the police may never apprehend him.

Why did he do it?

One explanation might be the desire to make mischief for his fellow blacks. Perverse people do exist, so it’s possible that this man wanted his fellows to feel attacked, degraded, humiliated. Imagining their negative feelings, he’d feel a certain pleasure or satisfaction. (Precisely why a man would have such a reaction is a good question for which I don’t have an answer. I will say, though, that moral evil is sometimes rather subtle and mysterious. For instance, the gossip about others that people engage in often indicates that they are hardly displeased by the misfortunes of others—friends and family not excepted—although the gossiper’s actual state may be obscured by some pretext of “concern.”)

“Lies are just something we Americans do, like playing baseball, watching the Super Bowl, and celebrating the Fourth of July.”

Another explanation would be that the perpetrator was advancing an identity-politics agenda. One of the things that the man spray-painted was “fuck niggers.” The default assumption, of course, is that anybody who would do such a thing certainly isn’t black, but probably white. And indeed, the intellectual class—journalists, professors, lawyers, Democrat politicians—is committed to getting blacks to believe that they are by definition “victims of a racist society,” in part because this lie affords a good racket for intellectuals. And needless to say, many blacks themselves believe this lie, too. Thus, for some years now, NFL players and NBA players, in the course of their disputes with team owners and league executives, have referred to themselves as slaves and to professional sports as slave plantations. The absurdity of the metaphors reveals that getting reality right is not what matters here; personal interests are paramount.

Although the perpetrator would not have directly benefited from stirring up black resentment about “racism,” he may have thought that blacks, as a group, would gain from his mischief. After all, Philly has one of the most liberal mayors in the country, the most liberal district attorney, and a new, liberal police commissioner who has already played both the race and the gender cards (she’s a black woman). Homicides are up 26 percent in Philadelphia this year, but still all three remain strong proponents of “prison reform” and “decriminalization,” in part because they think the criminal justice system is “racist.” Spray-painting language such as “fuck niggers” in public places is one way to push the leftist lie that blacks are a victim group—one that deserves “prison reform” and “decriminalization,” as well as affirmative action, reparations, and God-knows-what-all.

In truth, lies are so customary in our society that we expect them, and therefore, we no more expect powerful, public figures to be sincere than we expect the customer service representative to mean it when he or she says, “Have a nice day.” Lies are just something we Americans do, like playing baseball, watching the Super Bowl, and celebrating the Fourth of July.

Undoubtedly, stop-and-frisk was and remains an imperfect art. It relies on human intuition and discretion, both quite fallible. Over the decades, many minorities probably were wrongly subjected to stop-and-frisk, which by its very nature lends itself to abuse by cynical practitioners.

Still, consider the alternative. Human beings are not psychic, but law and order are nonetheless essential, so how can police do their jobs without relying on “hunches” and “gut instincts”? If a group or groups are overrepresented in certain crime rates, mustn’t stop-and-frisk, and police work generally, reflect that? Is a society without stop-and-frisk preferable to one that is less “discriminatory,” even if it’s less safe? Which is the better trade-off?

Of course, this nuanced understanding of stop-and-frisk that I’ve tried to outline would be unthinkable from a politician, because his aim is to tell the right people what he thinks they want to hear. Hence Bloomberg’s “apology”:

I inherited the police practice of stop-and-frisk, and as part of our effort to stop gun violence it was overused. By the time I left office, I cut it back by 95%, but I should’ve done it faster and sooner. I regret that and I have apologized—and I have taken responsibility for taking too long to understand the impact it had on black and Latino communities…. [As] president of the United States, I will work to dismantle systems that are plagued by bias and discrimination. I will invest in the communities that bore the brunt of those systems for generations. And I’ll put this work at the very top of our agenda.

So it is, too, with Harvey Weinstein and the #MeToo movement, which is not so simple or black-and-white as our culture of lies would have us believe. On Monday Weinstein was convicted of two felony counts—criminal sexual assault and third-degree rape. He was acquitted of three additional counts—two counts of predatory sexual assault and one count of first-degree rape. Weinstein also faces charges of sexual assault and rape in two separate incidents in Los Angeles. Now, I don’t doubt that Weinstein was long a creep who exploited women, and I don’t wish to imply that he never assaulted or raped them, since for all I know did. Still, in view of the evidence, most of Weinstein’s ninety-odd accusers appear to have been bartering with the producer. They didn’t want to have sexual relations with him, but they did so anyway, as they thought it would help their careers.

Most implausible are the accusations by the actresses Asia Argento and Jessica Mann, women who claim that they proceeded to have a relationship with Weinstein after he had raped them. The language of these women’s communications with Weinstein makes it very hard to believe he actually raped them.

Certainly, people who know how the world works know that, just as there are always plenty of men who want to use their power to win the favor of women, or anyway to try to manipulate or exploit women sexually, so there are always lots of women who are willing to use their looks to realize their interests, and to play the sort of quid pro quo games offered by men like Harvey Weinstein. And yet, we aren’t supposed to notice the rather simple truth that, in eros, women, like men, are hardly angels. That memory can be conveniently selective is a truth we are supposed to ignore when it comes to women and sex. That women may be self-deceived, or exploiting the general paternalism they enjoy so as to get revenge on men, are possibilities we aren’t supposed to consider.

Even in our relations with family and friends we all find that there is only so much room for truth. Life would immediately become intolerable if we knew what everyone thought of us, and if everyone knew what we thought of them. There is nothing about the character of mass society, or about mass media, that is especially conducive to the expression of truth, or to tolerance, forgiveness, or virtue generally. Rather, because of the way we live now, it is lies that thrive, lies and manipulation.