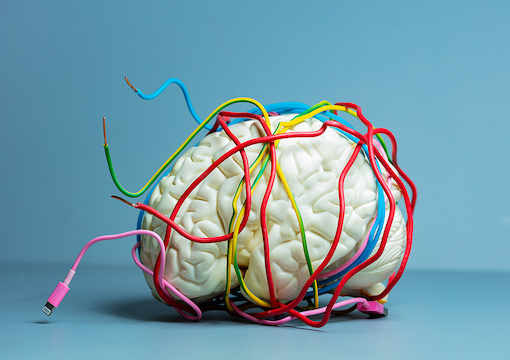 Three years ago I wrote about a girl I dated in the 1990s who slowly but inexorably fell to paranoid schizophrenia. The hardest part of the end-stage of that relationship was seeing the sudden shifts from lucidity to insanity. They’d come quickly and unexpectedly. We’d be enjoying a day at a museum, speaking of Cézanne and Degas, and then she’d go off on some wild tangent about something that made no sense outside her diseased brain.

A trick I learned to draw her back from mania was to get her focused on something concrete, something real in the physical world. A bench, a tree, a lamppost. Something she could understand on the most basic, nonabstract level.

It would work…briefly. But then the delusions would kick in and the real world would drift away again.

“If there was any ‘hypnosis,’ it was caused not by ‘focus’ but by the lack of it. Focus would’ve prevented 1/6.”

Watching Tucker Carlson these days gives me uncomfortable flashbacks to that relationship. He can be lucid one moment, and the next, uh…

Tuck’s at his least nutty when concentrating on something specific (a particular politician or event). He’s at his worst when he tries to be philosophical. So in last week’s strikingly unfocused opening segment, which apparently had something to do with “the modern world,” Tuck quickly veered off into a diatribe about…skyscrapers.

Bigness is inherently ugly. There’s never been a beautiful skyscraper. Every single one of them is an atrocity. The fact that people still pretend otherwise tells you how conditioned we’ve become to disregard our own nature and our own natural longings.

So we’re supposed to be against tall buildings now? I must’ve missed that memo. Skyscrapers are one of Western man’s greatest achievements. While people in other parts of the world were only capable of crafting structures that would blow over in a hard wind, Western man was doing stuff that made Third Worlders think whites were gods or demons.

Plus, I’ve never met anyone who sees the Empire State Building as “an atrocity.” But here’s Tuck telling us that if you like skyscrapers, you’re a “conditioned” dupe.

Would you rather wake up in a $30 million condo in the top floor of an office tower, or in a log cabin in a pine forest, woodstove glowing as the snow falls? That’s a rhetorical question. Obviously, no sane person would choose the condo.

Then I guess I’m insane. I like being near bars, nightclubs, supermarkets, and good restaurants.

Tucker literally says you’re insane for preferring the comforts of modern life, as if frontier pioneers were interested in stasis not betterment (I doubt the members of the Donner Party were like, “I really hope my grandchildren are forced to live this exact same type of life!”).

When I wouldn’t “see” the spirits and phantasms my ex saw, she’d accuse me of being the crazy one. “You don’t see what I do? You’re insane!”

And Tuck wasn’t done. Proclaiming that population size is more important than population quality, he declared that even if every new immigrant were a Nobel Prize winner, it would still be bad because we have “too many people.”

What horseshit. There are plenty of regions in the U.S. actively looking to grow. The problem is that they’re growing via the importation of low-IQ Third Worlders. The depopulation and desolation faced by so many small towns in Mid-America is not something to be celebrated. If those once-thriving, now stagnant and declining burgs could be rejuvenated via an influx of Danes, Dutchmen, or exiled white South Africans, great!

Tuck’s rant represents a significant problem for the right in general. I wonder how many of his viewers cheered that opening monologue without realizing how CRT “woke” the themes were.

You know who else would say that the ability to engineer skyscrapers is meaningless when evaluating a people and their civilizational skills?

You know who else would say that an African rondavel is superior to a Western high-rise condo?

And that Nobel Prize winners are of no greater worth than other immigrants?

Rightists who applauded that monologue would screech in fury if those same points were made by a leftist. At every turn, white kids are told to be ashamed of Western heritage, and yes, that includes skyscrapers and Nobel Prizes and modern temperature-controlled buildings. They don’t need that shit from the right as well.

So why are they getting it?

Well, there’s a struggle, I don’t want to say “for the soul of the right,” because that’s contemptibly clichéd. Let’s say instead, “for the right’s ability to be effective vs. the converse.” And that struggle is between the people pointing to the bench (rising crime rates and “progressive prosecution”), the tree (the deleterious effects, economically and societally, of Third World immigration), the lamppost (the disastrous consequences of discrimination against white males)—the things that are objectively true and (as a result) useful in winning elections—and the people who play to the right’s worst fetish: its weakness for kooky “dry-erase board” conspiracy theories, which all too often leads to a boredom with real-world election-winning issues (like crime), because selling your cow at the marketplace, while practical, is dullsville, but being told you can trade it for magic beans really ignites the imagination!

That’s how we get soliloquies about skyscrapers that not only aren’t productive but in fact are counterproductive.

There’s a difference between not making something better, and making it worse. You don’t want to help me keep my schizo girlfriend focused, fine. Don’t help. No one’s forcing you to help. But don’t actively encourage her to lose focus by indulging her visions.

“Counterproductive” and “focus.” Those two words bring us back to last week’s column, and my critique of Dr. Robert Malone’s “mass formation psychosis” yarn.

The reason I went after Malone’s “Hitler hypnotized the Germans who went barking mad and killed the Jews” Facebook meme is that it’s not just false, but when Malone tried to apply it to present-day America, he ended up misdirecting his audience from what’s actually occurring today.

The crux of Malone’s claim is that Americans, like Nazi-era Germans, are being “hypnotized” because leaders with foul intentions are “focusing” the public’s attention, much as a hypnotist might say, “Stare at the pen; focus on the pen.”

I think what’s happening is the exact opposite. Our “leaders” are trying to keep us unfocused, not paying attention. Taking advantage of a situation created by social media and a second-by-second news cycle, the powers-that-be bombard us with so much, nothing sticks.

They don’t want us “focused”; they want us discombobulated.

They don’t want us “laser-focused” on Covid specifics; they want us bombarded with so much contradictory info that we don’t notice the contradictions and no one is held accountable. That’s why lots of Americans have said “fuck it” to Covid regs. If you try to actually pay attention (“focus”), nothing makes sense.

Trump won in 2016 because he ran one of the most focused campaigns in recent history. Wall, deportation, border. People wanted that focus because no one else was providing it. When Trump lost the focus, he lost the voters and addled his base. That’s how a bunch of people could go from chanting “wall wall wall” in 2016 to storming the Capitol in 2021 saying, “We don’t really know what we’re doing here.”

If there was any “hypnosis,” it was caused not by “focus” but by the lack of it. Focus would’ve prevented 1/6.

I started thinking about this notion of unfocus and how “leaders” can take advantage of it when I realized how amazingly fast the Las Vegas mass shooting disappeared from the public consciousness, with zero of the pertinent questions answered. I’m not yelling “conspiracy”; I’m simply pointing out that if that can be supplanted by new trending topics within a few days, anything can.

Notice how the left doesn’t harp on mass shootings anymore, like Obama used to. Politico bemoaned that fact last November. Think-tankers and canny politicians on the left have figured out that their best strategy is to slip things by you quickly and inconspicuously. That’s why they’re not using every new shooting to publicly call for “takin’ yer gunz.” They’re having better success quietly infiltrating every DA’s office with their people. Let whites have thar gunz, and then toss ’em in jail when they use them.

Let blacks have they gunz, and set ’em free when they use them on whites.

The left would rather have you imprisoned or dead than disarmed but still alive and free.

I think the left’s hyper-focus on George Floyd is turning out to be a huge mistake. The murder epidemic that accompanied the “racial reckoning” is forcing blue cities to not just re-fund but up funding for police, and citizens (with no help from the incurably retarded GOP) are trying to get “progressive” DAs removed. Soros was having way more success under the radar. “Focusing” turned people against his cause (and I think the Dems will find that their obsessive “focus” on 1/6 will not help them in the midterms).

Look at the panic on the left once parents caught wind of CRT. Our “leaders” don’t want you to focus; they want you overwhelmed and confused. That way, something like the Ghislaine Maxwell trial can come and go quick and painless (and, like Vegas, with no questions answered), and people are unperturbed because it barely registered with them.

Leftists have weighed what they gain from “laser focus” vs. what they gain from a populace that can’t focus, and Soros leftists (the ones with long-term civilization-destroying goals rather than short-term immediate-gratification ones) have realized that they gain the most by keeping people from (in the words of Steve Sailer) “noticing.” And since, even with all the efforts of Big Tech to censor info, you still can’t keep folks in the dark about everything, the smart move is to overload, confuse, and do all you can to inhibit the ability to focus.

Whereas conspiracy mavens love claiming that powerful entities distract you from important stories using false flags, the reality is, it’s not about focusing on distractions but rather fostering (or at least exploiting) a mindset in which people become incapable of focusing on anything in the news. Once overwhelmed, people stop paying attention.

Tuck thinks you’re being “conditioned” to like skyscrapers, when in fact he’s the one assisting in the actual “conditioning” by bombarding you with meaningless palaver that only pushes you further away from “bench tree lamppost” (real things you can focus on to stay centered).

As I said last week, lucidity is the right’s only winning hand.

In 2022 America dissociation-land, there are two opposing forces: one that encourages focus, and one that distracts from it. Those in the latter group are the problem, and it doesn’t matter if they’re left or right.

The only difference is, leftists do it to advance their grand agenda.

Why do some rightists insist on playing along?

I wish to God I knew.