The Parable of the Nazi Pizza 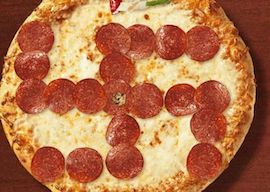 Susan Pang was one of the most attractive women I’ve ever known. Born in Hong Kong but raised in the U.S., one parent was a right ol’ proper servant of ’Er Majesty’s bleedin’ government, and the other was a Hong Kong native. We never dated, so I can’t say that she was my Asian, but she was definitely Eurasian, although she looked so racially indeterminate as to defy classification. She was an actress, and I met her in 1993 when I was working in film and TV casting. She was very talented, and we quickly became good friends.

Time and again, when I tried to find acting work for her, I’d be stymied by production execs who’d ask, “But what IS she? Is she Asian? White? Part Hispanic? A little black?” I would explain to those dunces that mixed-race was the way of the future, but in spite of my best efforts, Susan never got any meaningful gigs (the one role I did get her she only landed because the director, American Indian Movement activist Russell Means, mistakenly thought she was Injun). Eventually, Susan gave up on acting. She married an Irish lad, and had five beautiful kids.

And then Hollywood finally caught up to her. Now in her 40s (“mom-age,” as they say), Susan built a career in commercials (the market that rejected her 25 years earlier) playing moms in mixed-race families. These were big, national campaigns for “blue chip” brands. She became Pillsbury’s official commercial mom—the face of the company in a series of family-oriented spots that have blanketed prime time over the past few years. Tragically, in July 2018, at age 46, Susan succumbed to cancer. Yet her commercials continue to air. Every week, millions of Americans joyfully kvell over the heartwarming exploits of the Pillsbury mom, not knowing that they’re watching a dead woman.

I can’t help but be awed by the irony. Twenty-six years ago, I couldn’t pay commercial producers to hire her. Yet today her look is so in-demand that even death hasn’t stopped ad execs from using and reusing her image. She’s considered so racially perfect for effective ad penetration that her digitally preserved face lives on even after the actual human has expired (points to any readers who just flashed on Michael Crichton’s Looker).

Why has Susan Pang gone from unemployable to immortalized in the matrix? Remember that monstrosity called Teletubbies? It was created based on the principle that babies like to watch other babies, and the sight of a fellow baby makes babies more receptive to televised images. Years later, a light suddenly went off in the cavernous heads of advertisers: That shit goes for adults, too. We like to look at people who remind us of us. Race matters, even to those who claim it doesn’t.

“The result wasn’t so much a deal with the devil as a deal between two devils.”

In early May, “black Twitter” erupted in a rage when that bafflingly popular HBO series about dragons and wieners and stuff killed off one of its characters of color. The character in question, Missandei, was played by the preternaturally stunning mixed-race Nathalie Emmanuel. Her Wiki bio is a geography lesson: “She’s the child of a half Dominican (Dominiquais) and half English mother, and a father of half-Saint Lucian and half English descent.” Among the Missandei mourners was Carolyn Hinds, a podcaster and writer for The Root, SyFyWire, and SheKnows. Following Missandei’s final episode, Hinds tweeted, “I’m so upset. I cried at the end, and still feel like crying. I can’t explain what it feels like to see characters who look like me, be continually treated like their lives don’t matter. It hurts so much.”

And Twitter collectively shat a laughter brick. Because Hinds, who is so Vantablack she immediately absorbs the light from any room she enters, looks so little like Nathalie Emmanuel, her tweet could only be interpreted as a sign of severe self-delusion. Not to put too fine a point on it, but rumor has it that Hinds was once disqualified from a Yaphet Kotto look-alike contest because the organizers thought she actually was Yaphet Kotto.

“Ummmmm idk if you’ve looked in the mirror lately but you look nothing like Missandei.”

“This may be the stupidest thing ever written.”

“You look absolutely nothing alike wtf are you on about.”

And my favorite, “Here, have a Snickers.”

Carolyn Hinds is why you see so many mixed-race people and families in TV commercials (and elsewhere in the entertainment media) today. If she can see herself in someone like Nathalie Emmanuel, if she can become emotionally invested in the choices made by Emmanuel’s fictional character, then she’ll be the first one to robotically buy a product because a mixed-race actress is hawking it.

Race is a valuable commodity. That’s a simple truth, in the advertising world as well as in Hollywood. And just as race is a valuable commodity, so is racism. In fact, I’d argue that racism sells even better than race. A person whose race is X will see an attractive actor of X in a commercial, and that person might—might—be tempted to purchase the product being advertised because the commercial pitchperson looks like them. It’s a decent advertising strategy, but by no means guaranteed to work. On the other hand, if the person whose race is X sees an online essay or article that attacks people who are X, it’s damn near certain that the person of X will get angry and make an outrage post in which the offending link is shared.

The awesome online power of race is nowhere stronger than in the world of opinion journalism. Nothing gets social media more riled up than opinion pieces about race. People love approvingly sharing posts that insult other races, and people love angrily sharing posts that insult their own race. Race gets hits. The problem is, our benevolent media overlords are supposedly working to cleanse racism from the internet. So, how do you fight racism while still benefiting from the ad-rate-setting clicks, likes, and shares that are generated by provocative pieces that deal in racial hatred?

I’ll answer that question with the Parable of the Nazi Pizza.

The year was 2017, and John Schnatter, the founder of Papa John’s Pizza, made the mistake of not being properly deferential to the NFL’s kneeling thugs who make millions of dollars chasing a ball in the mud. So the press decided, “We gotta get this guy because he’s a Nazi racist.”

The media wanted Schnatter’s head on a platter. The neckbeard Einsatzkommandos at the Daily Stormer wanted publicity. And the result wasn’t so much a deal with the devil as a deal between two devils.

The Nazi trolls posted the images they knew the media wanted, most notably a Papa John’s pizza with the pepperonis arranged to form a swastika. Newsweek could not have produced such an image itself, as the Nazi pizza is clearly defamatory. But it could cover, in the name of “news,” the fact that Nazis produced the image. Because that’s not creating the story, it’s only reporting it (even though yes, it’s totally creating the story).

Newsweek’s piece about how “Nazis love Papa John’s,” with the “Nazi pizza” image at the top of the page and in the social media thumbnail, went super-viral.

There’s multilayered artistry going on here. The neo-Nazis knew that if they posted the Nazi pizza image themselves, it would be swiftly removed from social media. So they gave it to Newsweek, a Twitter- and Facebook-approved site. And now that Newsweek was using it, it could be posted on social media! The Nazis got to post their swastika image without fear of drawing a ban, and Newsweek got a viral story that allowed them to exploit the swastika image while being seen as condemning it. Everyone got what they wanted—the Stormer trolls got attention, and Newsweek got hits.

Make no mistake—the mainstream media pushes for the deplatforming of “racists” not because it wants racism banished, but because it wants a monopoly on it. “You wanna get your fix of Nazis and Klansmen? You gotta go through us.” The genuine Nazis and Klansmen understand this, and, because “leben, uh, finds a way,” they’ve learned to exploit the situation to get the exposure they’re deprived of through deplatforming.

And here’s where the two halves of this week’s column come together. My dear friend Susan, dead and buried, lives on as a hologram devoid of agency or influence. She has a media presence solely because others find it racially conducive and economically profitable. Similarly, once the media tars someone rightly (as in the case of the Stormer trolls) or wrongly (as in, me) as “racist,” we become like Susan. Banned from platforms where we can speak for ourselves, we are turned into cardboard cutouts whose sole purpose is to garner clicks. During the recent controversy involving a judge who was censured for posting one of my columns, not a single one of the dozens of news outlets that covered the story (NY Times, USA Today, Newsweek, the AP, WaPo, etc.) interviewed me or linked to the offending column. Because the story was about avatar David Cole the racist “denier,” not real-life David Cole, and allowing readers to read the actual words of real-life Cole would have blown a good bugbear.

For people wrongly vilified as racist, this situation is grim. But for true racists and Nazis, like the Stormer trolls, it’s super cool, because all they want is PR, and they don’t care how they get it. They like being bogeymen. For them, the arrangement with hack sites like Newsweek is mutually beneficial.

Because inevitably, in any deal between devils, only devils will profit.