The Proper Use of Dead Jews 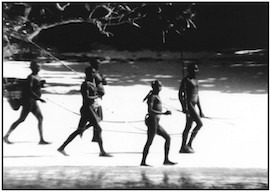 By now you’ve probably heard the knee-slapper about the millennial missionary who sneaked onto a forbidden island inhabited by the earth’s last uncontacted, pre-neolithic tribe of humans in order to convert them to Christianity. To John Chau, proselytizing was an extreme sport, something to be done while wearing expensive North Face gear and live-blogging with your GoPro for your monetized YouTube channel (“Don’t forget to hit ‘subscribe’ after you accept Jesus as your lord and savior!”).

Today’s live-blog of the conversion of the Sentinelese troglodytes has been canceled on account of an arrow in the face. Please follow John Chau’s funeral on Instagram.

I’ve long questioned the ethics of keeping primitive tribes cordoned off and isolated. Yes, I get it, we’re making up for past excesses, when civilized Westerners forced developmentally arrested protohumans out of their trees and into fine suits and stuffy, soul-killing schools and churches. But people love replacing one extreme with another. So now we fence the poor bastards off, forever preventing the “mixing” and “diversity” that are supposedly the essential elements of any great society.

I wonder about that Sentinelese tribe. Could they ever actually “assimilate” even if they had to? I mean, in the earliest days of human existence we were all that primitive, and it took many, many millennia for us to reach the evolutionary high point where we could wear skinny jeans, master the vape stick, and appreciate Hall and Oates ironically. Have the Sentinelese remained primitive for too long? Are they permanently stunted? And to what extent can any genetically related group of humans become so locked into a way of thinking, and a way of living, passed down from one generation to another, that traits that are not per se immutable become immutable?

At a holiday party last week, a high-profile rightist thanked me for opening his eyes to the “JQ” back in the ’90s, which is as nutty as anything anyone has ever said to me, as I never spoke of the “JQ” back then, and I never speak of it now, other than mockingly. Isolating the “JQ” from the “W (white) Q” or the “B (black) Q” is ridiculous. All races, religions, and ethnicities have the potential to develop pathologies that spread like virulent strains of syphilis throughout the group. I’ve devoted many words to the current Muslim pathology of violent religious intolerance, and I’ve written a good deal about white pathologies, too. For centuries, whites were obsessed with the notion that, being superior as they felt they were, it was their divine right to conquer and enslave the “inferior” races. In yet another example of replacing one extreme with another, many whites now act as though it’s their sacred duty to atone for past sins by allowing nonwhites to reconquista the shit out of the West.

“We’ve been living with the ‘pogrom mindset’ for so many centuries, can we ever lose it?”

The right or wrong of it doesn’t interest me. What does is the ability of the white Christian West to emerge from one pathology and dissolve into another, to go from “We will conquer you” to “Please conquer us.” Of course, white nationalists will claim that the white West was coerced, “tricked” into such a reversal by outside forces. Which brings us to the “J” in the “Q.”

When one considers the Jewish experience in Europe over the past thousand years, what stands out to me is the fact that even in the face of countless expulsions—expulsions from England, France, Germany, Spain, Italy, Russia, and, well, you name the European country and it’s likely to have expelled the Jews at some point in its history—by the time Hitler came to power in the 1930s, there were still damn near 10 million Jews on the continent. That’s truly astounding. No matter the forced expulsions or the forced conversions (i.e., the influence of “outside forces”), the Jews held on to their identity, and to their desire to remain in Europe. Sure, it can be argued that for centuries they had nowhere else to go, but a weaker group would have just converted en masse.

Think of what it took to keep coming back. Not just the will, but the smarts to persuade the people who just kicked you out to let you back in again. And to pull that stunt multiple times! That’s impressive. Again, the right or wrong doesn’t matter to me. It’s just damn impressive. But what kind of a stamp did centuries of living that way, surviving that way, leave on the psyche of European Jews?

I thought about that a few weeks ago, when I was unfortunate enough to encounter an L.A. Times op-ed about the mass shooting of Jews at a Pittsburgh synagogue last month. The author, Rob Eshman, former publisher and editor of L.A.’s Jewish Journal, found a silver lining in the massacre of nearly a dozen elderly Jews. “The Tree of Life Synagogue victims died so that refugees could live,” Eshman declared. Those Jews died so that Honduran and other Third World immigrants could flood the U.S. illegally. “The Jews gunned down in the Tree of Life Synagogue died for a cause. Whether they knew it or not.”

I’m guessing they didn’t know it. I seriously doubt that the last thought to course through the mind of 87-year-old Melvin Wax as his body was being riddled with bullets was “Well, at least now some Honduran gang members will get to be on welfare in East L.A.”

One might consider it crass to exploit such a horrific crime to advance a completely unconnected political goal, but I consider it a prototypically Jewish move. A neo-Nazi savage guns down defenseless octogenarians, but hey—we can use that to advance an agenda to flood the U.S. with Democrat-voting illegal immigrants to further erode the traditional West. And Eshman was hardly the only Jewish journalist or spokesperson to see political advantage in the immediate aftermath of the massacre. Just as in the case of the Holocaust, Jews more often than not view murdered Jews not as tragedies but as opportunities. Lemons to lemonade? More like cadavers to Camay.

Strategize, overthink, overintellectualize. It’s all so very Jewish. When white supremacist Dylann Roof murdered nine black worshippers in Charleston in 2015, black spokespeople and religious leaders responded with anger toward whitey. “Crush whitey, never forgive whitey, fight whitey.” It was a brutal response to a brutal act, but damned if it wasn’t honest. Blacks were killed, blacks saw the crime as a black tragedy, and blacks wanted vengeance. Jews can’t be that straightforward. We seek advantage through our dead. We make our dead your problem. The meaning we find in our deceased we find as a courtesy to you, to help you, to change your societies for the “better.” At a memorial service for his parents, the son of two of the Pittsburgh shooting victims urged the mourners to use his parents’ murder to “promote a positive outcome and meaning for society.” Not for Jews, but for society. We’re not thinking of ourselves, we’re thinking of you. Would any writer for The Root or Very Smart Brothas be so generous, so “internationalist,” in their grief? Of course not. “Niggaz was killed, and now we gotta do something to help niggaz. Fuck the rest of y’all.”

But with Jews, although the concept of self-preservation is every bit as important as it is to blacks, we just can’t bring ourselves to present it that bluntly, because too many of us act like it’s still 1290 and we’re this close to yet another expulsion. Think I’m exaggerating? Writing in The Jerusalem Post last week, veteran journalist Elli Wohlgelernter (of Haaretz and the JTA) drew a straight line between the Pittsburgh shooting, the expulsions of old, and the ones to come: “Pittsburgh was not an anomaly. It is consistent with every pogrom, every massacre, every holocaust that has befallen most every Jewish community over the span of 2,000 years.” Think you’re safe in America, fellow Jews? Think again. “There is little guarantee that even such a welcoming state as America can live on in perpetuity. Based on history, odds are it won’t.”

Yep, the pogroms are coming, so (as always) we strategize. And Wohlgelernter is no wacky leftist. We know the anti-Western agenda of lefty Jews, but some conservative Jews are, in a way, even worse. They bitch about the fact that black Americans still obsess over slavery, Jim Crow, and the KKK, yet they themselves cannot stop whining about centuries-old pogroms and expulsions. They tell blacks, “Stop dwelling on the past! Stop looking for racism that no longer exists! Stop inventing Klansmen where there are none,” even as they hypocritically rant about the throngs of modern-day Nazis only they can see. Word to the wise: If you’re a Jew and you want to hunt phantom Nazis, you can’t tell black folks to stop hunting phantom Klansmen.

Here’s where we circle back to those pre-neolithic red-painted bare-assed island tribesmen. They’ve been living a certain way for so long, I truly doubt they could ever change. For them, death would be preferable to abandoning the traditional lifestyle of their ancestors. I’m sure the tribe has developed a dense mythology, a worldview, that it has passed down through the centuries, and any threat to that schema would break those fragile little caveman minds. Western Jews, who are somewhat the polar opposite of cavemen in terms of society-building (finesse over brute force), appear to share that problem. We’ve been living with the “pogrom mindset” for so many centuries, can we ever lose it? Or would our psyches crumble without it?

And perhaps most important, can we ever stop manufacturing new threats to justify that outdated mindset? A man like Pittsburgh shooter Robert Bowers is representative of nothing more than human evil. He doesn’t represent a “movement” or a national threat. He’s a monster who deserves nothing more than a needle in his arm. But for the past two years, American Jews (left and right) have been wailing about how “the Nazis are back,” how they’re in our government, on the internet, spray-painting our sidewalks, defacing our synagogues and memorials (except, no and no), and threatening our lives (except, again, no). If I were an irrelevant basement-dwelling crank like Robert Bowers, I’d take all that “the Nazis are back and they’re everywhere” bullshit as an excuse to step out of the shadows and make a move. I mean, if, as the Jews say, Bowers has so many comrades in society and government, hell, he might as well fire the first shots and rally the troops!

To what extent was the Pittsburgh shooting a self-fulfilling prophecy for pogrom-minded Jews? To what extent does repeating the mantra that America is flooded with Nazis embolden actual Nazi crackpots to take action by giving them the illusion of safety in numbers?

Ah, hell, look at me, overthinking and overintellectualizing. As a Jew, that’s my red tribal paint, and I feel absolutely bare-assed without it.