The Revenge of the Weak 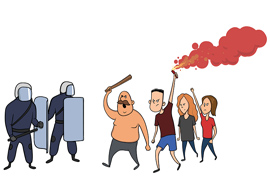 Listen to him squeal like a stuck pig, dear reader, his words the language of triumphant Western decay. His name is Eduardo Bonilla-Silva and, being president of the American Sociological Association, he’s no ordinary stupid toadying professor, but especially adroit at instructing fellow blockheads: “Let me suggest…the political conditions necessary to fight color-blind racism,” he implores, while white masochists at all the celebrated Temples of Lies yearn in excitement for the forthcoming whip.

Blacks and their allies would be the core of a new civil rights movement demanding equality of results…. To launch a frontal attack on the “new racism” and its color-blind ideology, the black masses must be as racially conscious as the leaders of the new movement. In ideological terms, the movement must break with the hegemony color blindness has over all Americans.

Alas for him, Bonilla-Silva—qua academic—is in the throes of those voguish superstitions, white supremacy and implicit bias. He therefore won’t settle for equal opportunity, this canting crusader. The trouble with such “color-blind ideology,” you see, is that it allows for actual diversity, that is to say, unequal outcomes among races and genders. And it is true by superstitious definition that whenever and wherever there is not “racial parity,” racism is the cause.

So, what is to be done? Why, of course, “blacks and their allies” must make demands! If, for example, the Harvard neurosurgery department is not sufficiently stocked with (non-yellow) “people of color,” well then, I think you better call Tyrone, Dr. Levine, ’cause it’s time to get some of those whites and Asians and Jews outta there!

“For progressive man, reality won’t do.”

As with shooting one another, blacks have become very good at making demands. They have, however, the lowest of mean IQs. Furthermore, as a close look at any American city quickly confirms, they’re pretty damn low in conscientiousness as well. Hence, mere racial disparity between blacks, whites, and others, far from being prima facie evidence of racism, is only to be expected.

But ah, that’s just the problem. For progressive man, reality won’t do. He deserves better. Plus, this fellow has “rights.” Hence the implicit maxim of our time: “To every hairy bag of water, the delusion he desires.”

As I have been arguing in my columns for about a year—most recently in “Nothing Is Safe From Resentment”—human nature is by no means inclined to start from equal opportunity and accept the results. The mind is nothing if not biased—indeed delusional—and since our most significant value, once our basic animal needs are met, is human nature’s difficult need for esteem, many people tend to believe they are victims in situations where they have simply been outperformed. For there is nothing we children of pride resist more, just as there is nothing that fills us with more resentment, than the terrible, nagging thought: “That person is better than me.”

Of course, sympathy also is a major causal factor here, determining how people perceive unequal outcomes. Nor is there any reason, in principle, why resentment and sympathy cannot create a kind of complex, the two functioning to affect how people view so-called inequality.

But the main point is this, and it’s a very dark one, so reach for your Obama dolls, O ye fools: Recent history has taught us that the democratic ideal of equal opportunity and thus fair outcomes is sure to be a very difficult business, so we must adjust our expectations accordingly. Contra Peevin’ Stinker, there shall be no “enlightenment now.” Rather, the weak and resentful will try to compensate for their own inadequacies through all manner of manipulation.

This is bad news for whites, and for the patriarchy of which I’m a card-carrying member in particular. No people, after all, has accomplished more historically than white men. And for that they must now be punished. In our time as in all others, the majority of intellectuals are dull pretenders, and this monkey-like endeavor, this incessant chatter about inequality, white supremacy, diversity, ad nauseam—with the final goal being race-based transferal of resources—also appeals to their underlying wickedness.

Then there is the legacy of Christianity, another important thing to understand in our current condition. Now, it was in the Judeo-Christian system that sympathy first became a central moral value. We don’t find it in the pagan Greeks, for example. By this means and others, Christianity transformed the moral character of the pagan world. It is ultimately to this process, doubtless too complex for us ever to fully understand, that we owe liberal democracy, constitutional government, and more.

The problem today is that, as our culture becomes more secular, people lack a coherent structure to guide the application of their moral intuitions and sentiments. They are basically on their own, and the result is not pretty. Their sympathy is often blind and, as we see from the immigration issue, destructive even when well-meaning.

Another difficulty that arises from the loss of religion is that, where people are not bound together by a homogenizing force (historically, the big ones are religion and war), they will be more inclined to the poisonous resentment that, being prerational and affective in character, is not adequately opposed by rational reason. Rather, only force can do.

And indeed, our country is now unraveling thanks to this very resentment. Thus, in a recent Washington Post article on the Aug. 11 protest in Charlottesville, Lisa Woolfork, a token mindless woman professor whose name sounds like it’s out of a Charles Dickens novel, tells us that she sees

a disproportionality…. Unless there is something they’re not telling us and have some intelligence that the white nationalists will still march in force, it seems like who they’re gearing up to monitor and observe and contain and discipline are those of us who want to resist fascism and racism.

Professor Woolfork strikes one as the sort of dunce who cannot behold a salad bar without complaining about the lack of proportion between the carrots and radishes. Has no one ever told her to shut up? One rather doubts it, and that’s just the problem in academia these days. Well says my beloved Nietzsche: “Thou goest unto women? Remember thy whip!”

There is no doubt, though, that Woolfork’s University of Virginia students are getting the waste of time, money, and energy they signed up for at the institution founded by—can you believe it?—Thomas Jefferson. For notice the singular idiocy of this woman’s mind. The two groups in question are the police and the protesters, the latter being Antifa and the like diversity-rabble. Since there are more police than protesters—in order to make up for the awful job the former did last year—Woolfork assumes there is something wrong, horribly wrong.

Needless to say, if there weren’t enough police, she’d have still been indignant, because cheap indignation—again, qua academic—is the very essence of her “professionalism.” As my friend Tony Esolen wrote to me the other day about a different token mindless woman professor, “She is complexly stupid: she has attained to a depth of stupidity that unaided Nature never confers.” Against such a formidable foe, nothing—least of all truth—can avail. The best anyone can do is to say with Dr. Johnson, “I have found you an argument; but I am not obliged to find you an understanding.”

This hypocritical game progressive academic donkeys and perpetual protesters like Antifa are playing—their racket, as it were—consists of pretending that they are not the ones who are racists. Having found that they cannot perform as well, on average or in aggregate, as the white men they detest, they want everyone to believe they are victims. By this insidiously vengeful means, they aim to obtain power, money, and distinction.

These persons, I submit, represent an ignobility of soul that we do not find in the past. They are a new low of human degeneration. As this needs to be understood from an historical point of view, let me here give an apt quotation from the acute Nassim Nicholas Taleb:

Owning one’s risk was an unescapable moral code for [the] past four millennia, until very recent times. Warmongers were required to be warriors. Fewer than a third of Roman emperors died in their bed (assuming those weren’t skillfully poisoned). Status came with increased exposure to risk: Alexander, Hannibal, Scipio, and Napoleon were not only first in battle, but derived their authority from a disproportionate exhibition of courage in previous campaigns. Courage is the only virtue that can’t be faked (or gamed like metrics). Lords and knights were individuals who traded their courage for status, as their social contract was an obligation to protect those who granted them their status. This primacy of the risk-taker, whether warrior (or, critically, merchant), prevailed almost all the time in almost every human civilization; exceptions, such as Pharaonic Egypt or Ming China, in which the bureaucrat-scholar moved to the top of the pecking order were followed by collapse.

The diversity hustlers are largely persons who do not have what Taleb calls “skin in the game.” Since nobody holds them accountable, “owning one’s risk” means nothing to them. Still, they are a cheat, less respectable than street thugs, who do at least have the guts to show themselves for what they are.

In the same Washington Post article from which I have quoted, there is a passage that I defy any parodist to surpass:

Nearby stood a man named Mike, who declined to give his last name, smoking a cigarette and making his way through a few beers before he started his next shift at American Sake Brewery. He watched the dozens of police all around him, and said he started to feel angry.

“It’s too much,” he said. “I’ve been here all of my life, born and raised, and I have never seen this…. Being black in America, this doesn’t make me feel safe.”

And yet there’s good news. Mike can simply kill himself, because life, after all, does not owe him a safe existence. Moreover, if, as a matter of course, you resent the very people who risk their lives to protect you, then surely you would do better to have mercy on your own wretchedness: As I say, Mike, kill yourself.

Mike affords an example of what may be the most strangely humorous aspect of our cultural decline. Working-class black men have learned to parrot (dear progressives, is a better word ape?) the hysterical victimization vocabulary of academia’s bluestockings, and the sight is hilarious beyond belief.

Perhaps, then, Michael Eric Dyson, Cornel West, and other eminent black scholarly charlatans might team up with John Singleton to create a sequel to Boyz n the Hood. Instead of engaging in arbitrary acts of brutal violence, young black men could spend two hours showing rapt viewers how unsafe they feel in white supremacist America. In keeping with the spirit of progress, this would be a kind of therapeutic version, enabling oppressed young black men to overcome their toxic masculinity by getting in touch with their feelings. Good team member that I am, I’d gladly watch this heroic film in a movie theater, although—for safety’s sake—not in one in a black neighborhood.