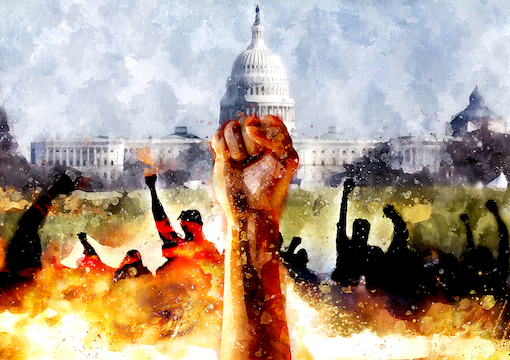 Throughout my life, I’ve often been accused of lacking empathy. It’s a critique that goes back to high school, when I was a compassionless bully. And I’ll admit, I do have an empathy problem, but only when it comes to imbeciles.

I just can’t muster sympathy for the stupid. I don’t hate them; I don’t even blame them (no one’s at fault for the intelligence they inherit). But when imbeciles become an obstacle, I have zero tolerance.

Hence why I’ve been unable to summon sympathy for the 1/6 rioters. I know that makes me an outlier on “the right,” but to me it’s not a right/left issue. After 9/11, the press was filled with weepy tales of this or that akbar who’d been “unfairly” sent to Gitmo. “He was only al-Qaeda’s cook! He only went to Afghanistan on a spiritual quest!”

“The left’s strength is taking the actions of one rightist and using it effect national change.”

Too bad. Shouldn’t a’ been on a battlefield after people acting in your name slaughtered 3,000 Americans.

In June 2006, when three Gitmo inmates killed themselves in a suicide pact prompted by despair over their imprisonment, my response was “Your little adventure in jihad didn’t end too well for ya, huh?”

That’s how I feel about the 1/6ers (from Ashli Babbitt to the rioters currently serving terms I wish every rioter in the nation would face). Trump sent you on a little adventure and maybe you shouldn’t have trusted him.

Now, I can hear some of you saying, “But the Afghan jihadists had a fully formed, evil philosophy and a link to actual terrorists; the 1/6ers were just screwy, mixed-up dopes.”

It’s way worse that the 1/6ers were stupid rather than malevolent.

Last week Julie Kelly of American Greatness tweeted the transcript of the FBI interrogation of a 1/6er accused of assaulting a cop. Kelly’s apparent goal was to make people “furious” at the FBI’s “sickening” interrogation techniques.

My reaction was the polar opposite.

After pathetically telling the FBI agent, “I’m just not smart!” and “I have $26 to my name,” the rioter confesses to trying to “take the Capitol” because “we felt they stole this country, that it’s gone, it’s wiped out. America’s over; it’s destroyed now.” The FBI agent asks him, “And so if you took the Capitol, then what?” And Dumbass McGee replies, “I don’t know. We just thought that…damn, dude…I don’t know. I understand what it…it’s very stupid.”

1776 Patriots: “With a firm reliance on the protection of divine Providence, we mutually pledge to each other our Lives, our Fortunes and our sacred Honor.”

At least jihadists have a holy book. This guy has $26.

Seeing QAnoners and Alex Jones types tormented by the FBI actually tickles me, because these folks have always been the first to appropriate the FBI’s brand of unreliable pseudoscientific “profiling” to advance their idiot conspiracy theories. “That Sandy Hook parent cracked a smile; he’s a CRISIS ACTOR! That Vegas shooting ‘survivor’ turned to the left when she should’ve turned to the right. CRISIS ACTOR!”

Hey—you wanna playact as bullshit FBI profilers, you should be honored to be in the presence of the real thing.

Not so fun when your cosplay becomes reality, huh? Like furries cornered by an actual grizzly bear.

I’m bringing this up because far from being “over,” this country has two pivotal elections coming up (the 2022 midterms and of course 2024). And the one thing we can’t afford is idiots ruining it for everyone else. All year long I’ve steadfastly encouraged rightists to harden their hearts to the 1/6ers (and the Charlottesville tiki-torchers, and the Spencers, “Baked Alaskas,” “cookie monsters,” etc.), because you’ll need that hard heart to tell them to fuck off as they try to sabotage the next two elections.

And I’m worried that you guys are not sufficiently hardened. A week ago when a bunch of matching-outfit-and-shield precious little drumline fairies called “Patriot Front” did a choreographed Chorus Line routine by the Lincoln Memorial, I noticed that there were only two responses on rightist Twitter: “They’re feds!” or “They rock!”

So those are the only options? Either they’re false flags or amazing patriots? No third option for “They’re sincere, but morons”?

I don’t like repeating myself, and I know I’ve been piling on the 1/6ers since, well, 1/6. But if there’s a reason I’m beating this dead horse it’s because it’s not fucking dead yet. After I tweeted my thoughts on the Patriot Front Riverdancers, I received a torrent of angry replies. I never like to “amplify” anonymous Twitter nobodies, but this response was instructive:

“Any political movement needs some kind of ground game.”

Exactly the kind of thing I counsel against. Just because you can articulate a maxim doesn’t mean there’s substance to it. Don’t be so in love with your own words that you make pronouncements without explaining why they’re valid.

“Every Norwegian needs a ferret.”

So I responded, “Your comment SHOULD read ‘Any political movement needs some kind of ground game in order to [?].’ See, you gotta fill in the ‘in order to’ part, and then explain how Patriot Front’s march DID that.”

That shut him up.

You wanna play Sun Tzu and rattle off buzzwords like “ground game”? Okay, Sun Tzu this, asshole: Learn your opponents’ strengths and don’t play to them. The left’s strength is taking the actions of one rightist and using it effect national change. One Cousin Oliver-coiffed murderous tard shoots up a black church and The Dukes of Hazzard is permanently banned from TV.

It takes skill to get from that Point A to such a seemingly random Point B. Recognize leftists’ abilities in this area and don’t give them ammo. The unfortunate fact is, there are too many feeble-minded, unpredictable man-children on the far right to risk trotting them out for public display. You have everything to lose by organizing Charlottesvilles, and zero to gain.

I mean that politically and fiscally.

To condense the Charlottesville civil case, the plaintiffs argued that the Unite the Right organizers had conspired to create a violent, racially targeting environment. And before the plaintiffs won the case and took every penny the organizers ever made or ever will make, the defendants had already been bankrupted merely by the cost of having to defend themselves.

On one level, the left did the right a favor on this one, taking those buffoons out of the picture. That said, the plaintiffs’ case was thin. Yet the jury went for it, and a “movement” was quashed (its leaders were financially crippled, and a shot was fired across the bow of anyone who might follow in their footsteps).

Now, get this: On June 3, 2020, in the aftermath of the BLM looting and riots that ravaged Beverly Hills and the Jewish Fairfax District, the L.A. Times ran a piece in which the head of BLM-L.A. bragged that the group had “deliberately descended” on L.A.’s white and Jewish areas in order to put “pain” in the “faces” of the residents. The BLM leader unapologetically admitted that the violent “unrest” was planned “by design” with a racial target.

That one article contains more evidence to prevail civilly under the Charlottesville standard than anything presented by the Charlottesville plaintiffs. And imagine what additional material could be garnered during discovery and via depositions if a civil suit were initiated. And remember—these lawsuits often bankrupt defendants whether they’re successful or not. It’s all about forcing your foes into mounting a costly defense.

But too many of you would rather share Breitbart pieces about BLM leaders’ multimillion-dollar homes than try to actually penalize those monsters and take their homes for the harm they’ve caused.

For the past year I’ve suggested to high-profile rightists that they should launch a Charlottesville-style lawsuit against BLM-L.A. And you know the response I typically got? “Gyuk-gyuk-gyuk, why would we wanna help L.A.? Ya gits what ya voted fer!”

But if you suggest that rightists should employ a successful strategy to bankrupt BLM the same way leftists used Charlottesville to bankrupt the Unite the Right goons (who were already practically penniless, whereas the BLM leaders have deep pockets), you get the John Nolte “fuck yoo ahm a red stater” assholes who wouldn’t know Sun Tzu from Sum Jew.

The Charlottesville trial reamed the tiki-torchers, and yet there are still people on the right—the ones who cheered the “one…singular sensation” terpsichoreans of Patriot Front—who say, “Let’s not copy the successful strategy that took down the Charlottesville planners, but rather let’s plan more Charlottesvilles that will lead to more of us being taken down!”

Suicidal tactics from brainless termites. And if these bugs are feds or fuckups, does it matter? Don’t you lose either way?

Gas ’em back into the woodwork.

This is the scabbing stage of Trump herpes. You pick at it, you go back to ulcer stage. You ignore it, you progress to healing stage. Yes, it was a lot of fun to cosplay and meme and hail for Trump. But Trump didn’t win in 2016 because of that. He won because he spoke basic truths that resonated with folks who are too busy working to LARP. And when he abandoned his platform the rightist performance artists couldn’t let go of their Cirque du Soleil floor show. It was no longer about what’s good for America; it was about a bunch of faggoty buskers who can be counted on to ignore the Charlottesville civil trial precedent and dismiss attempts to recall Soros-backed district attorneys. They’ll embrace Lin Wood and Sidney Powell and feverishly cling to new lunatic theories about how Trump will be installed as president on Christmas Day.

If it’s unhelpful, they’ll do it. Guaranteed.

Meanwhile, the sane among us will recall Marge Simpson’s wise words back in 1990: “I guess one person can make a difference. But most of the time, they probably shouldn’t.”

And by God if you can’t tell the difference, sit the next few elections out.