The Rise of AOC 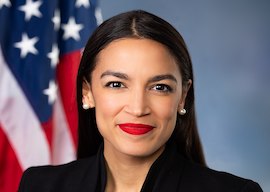 This last political season, a 29-year-old bartender named Alexandria Ocasio-Cortez, a self-described “radical,” came “dancing across the water” to conquer the Democratic nomination and a congressional seat in Brooklyn, New York.

The emergence of AOC is similar to the 2015 political arrival of Donald Trump in that her personality and superstardom inspire many analogies as well as elaborate think pieces. Like Trump, Ocasio-Cortez understands that you don’t have to be liked by everyone to be a main event. Interestingly, right now they both share almost identical favorability ratings.

Both Trump and AOC inspire atavistic hatred from their detractors. And with good reason. Trump is an archetypal American boss: rich, loud, and probably smoking a cigar as I write. AOC is your freshman college student who just took Humanities 101 and now relishes pointing her finger and shouting “racist!” at every wimpy white person who stands in her way.

Ocasio-Cortez joins The Donald in using flamboyant hip-hop style to make the political personal. Responding to a critic recently, AOC shot back, “Don’t hate me cause you ain’t me.” Ocasio-Cortez’s appeal is too good to be true for the liberal: a feisty Puerto Rican, daughter of an immigrant, who rose from political obscurity to take on old white America’s vulgar billionaire president.

AOC is every bit the liberal Gen-X hipster dad’s manic political dream girl. Can you blame them? She’s an attractive “woman of color” agitating for socialism, and she dances to French indie rock. They probably daydream of her nationalizing industries and jailing Republicans on their way to work on their Bird scooters. I doubt “Beta” O’Rourke can work up the nerve to even email her.

“AOC speaks to the newly radicalized lower middle class who until recently could not tell you the difference between Karl Marx and Richard Marx.”

This past week, in an interview in The New Yorker, Rick Perlstein, a historian whose inability to perceive conservatism’s present and future puts in doubt what, if anything, he’s learned from chronicling its past, spoke boyishly of AOC. He embarrassed himself by speaking of her “obvious erudition” (this even befuddled his New Yorker interviewer). He earnestly argued that she’s the first Democrat in generations willing to get angry and push back against Republicans. If Perlstein needs another liberal congressman from Brooklyn willing to finally, at long last, stand up to Republicans, he should catch this rising star.

But it’s not her erudition that makes her so winning. Like Trump, AOC is a loudmouth who uses Twitter effectively. She’s even begun hosting a workshop for other Dems so they can better use the platform. It’s a shame that not enough deep thought has gone into how the internet, and specifically Twitter, is the most innovative sandbox for intellectuals (“Intellectuals” in the Paul Johnson sense) in centuries. Being a sort of dreamland where words are disconnected from action and reality, Twitter encourages a kind of arms race for extremists. Since there’s not much at stake when you virtue-signal, you can ramp up your rhetoric all you want, at almost no cost. Of course, these people have no clue what living under a socialist or fascist regime would really be like for them.

So as her subjects gather round her, like the leaves around a tree, it’s hard to tell if Ocasio-Cortez is actually an ideologue or just an opportunist. In college, she actually described Adam Smith as one of her heroes. Her Teen Vogue radical politics are part of her appeal: She speaks to the newly radicalized lower middle class who until recently could not tell you the difference between Karl Marx and Richard Marx.

AOC strikes me as a millennial above all else, an unashamed self-promoter and a narcissist willing to flog her personal brand at any cost. Ironically, millennials are hyperaware of brands without knowing how toxic the “millennial” brand has become.

Republicans are dumbfounded over how to defeat the social-media rock star. Democrats had a similar problem with Trump. A potential nude photo of AOC probably wouldn’t harm her (even the First Lady has nude pics online). When the average Twitter socialist looks like one of these creepy dorks, and even Vox—Vox!—is calling out the socialist left on misogyny, you can see why AOC skyrocketed to fame. Ocasio-Cortez is aggressive, and she gives a decent interview. She can maintain eye contact, which for a millennial makes her some sort of charisma black belt.

So what’s the answer? Wait her out, and don’t attack Ocasio-Cortez. In a two-party democracy you’re only one market crash or unpopular president away from the average person believing that the alternative (any alternative) is the better option. It’s foolish to believe a far-left candidate can’t win.

Luckily, the nature of the social-media beast is to trend and then to untrend. Consider Lena Dunham’s trajectory: seemingly unstoppable, but eventually people tired of her. Likewise, Black Lives Matter seemed like it was here to stay. Fortunately a cop killing at a summer 2016 protest and a press release calling Israel a “genocide state” meant it was done.

AOC has been cagey on the question of Israel and the Boycott, Divestment and Sanctions movement. I doubt she’ll join fellow female rookie Ilhan Omar in suddenly supporting BDS. Right now she’s only saying “no comment” on the subject of Israel. My guess is that this is where she makes the wrong move.

Or, more likely, she will burn herself out as millennials (and they’ll be the first to tell you) burn themselves out.