The Social Justice Strangler Gets a Free Pass 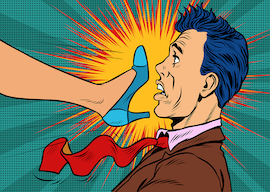 “Reality hits you hard, bro” is a phrase that was immortalized in a 2011 viral news interview with Arizona “eccentric” George Lindell following a violent car accident. In 2016, Lindell went viral again for less endearing reasons, but his catchphrase remains true: Reality hits you hard.

Two white chicks were hanging out in Downtown’s fashionable Murder District looking to buy designer hot dogs from one of the city’s many overpriced “urban” food wagons (“Er mah gerd, Meggan, this is, like, an authentic Mexican hot dog”). Ahead of them in line was a gangster-rapper wannabe named Arka Sangbarani Oroojian (an Irishman, no doubt) who was displeased with the hot dog vendor’s prices. Oroojian, a hulking 6-foot-3, 250-pound brute who goes by the rap name “The Virtue,” began loudly berating the vendor. One of the women asked Oroojian to move aside so they could get their food (“ER MER GERD, how long do I have to wait for my indigenous Oaxacan kosher frank?”), and, as the two petite young ladies tell it, Oroojian started wailing on them. As “The Virtue” tells it, the women spat on him, and before he knew it they were coming at him with a flurry of punches and kicks.

By the time the hipsters and homeless of Downtown started shooting with their phones, the battle was on. Two smallish babes duking it out with Gorillarian the Armenian Behemoth.

Both women suffered facial bruises and a concussion.

Look, it really isn’t funny. But the simple fact is, those women were clearly outmatched. What the fuck was with coming back for round after round? It was like a Chuck Norris film, where the ninjas attack one at a time. When white-jacket girl came back for round 3, what the hell did she think had changed after rounds 1 and 2 that this time she could make a dent in the guy? Oroojian’s attorney told local media that the girls’ tenacity proves that they were the aggressors. I’m not so sure; I think feminist “grrrl power” ideology had simply corrupted their sense of reality. Young women these days are reared on hundreds of films and TV shows in which petite cutie-pies beat up giant men. Actress Lucy Liu is 5-foot-3 and weighs less than my beer gut, but in the Charlie’s Angels films she’s shown kicking guys like Oroojian clear across a room. Jennifer Garner, Charlize Theron, Milla Jovovich, Keira Knightley, the skeletal Angelina Jolie, and so many other small-boned actresses have portrayed action chicks who can send a giant man flying with one punch.

“It’s good to know that you can totally strangle an innocent guy in Plattsburgh as long as it’s in the name of social justice.”

In the Emma Peel seasons of the Avengers TV show, legendary British stunt coordinator Ray Austin tried to play things straight. His fighting style for Diana Rigg had her putting down baddies by relentlessly chopping their necks (as it was the mid-1960s, one couldn’t depict a guy getting kicked in the nads, although that’s always a sound option in a real-life female vs. male fight).

Which brings us to the Social Justice Strangler. She took on a dude, and she not only won the fight, but she won a free pass for strangling a guy who, unlike Oroojian, was unquestionably innocent of any wrongdoing.

Twenty-two-year-old blonde Kierah Lagrave loves to hate. Her Facebook page is an ode to her hatreds, which include Christians, “right wingers,” pro-lifers, people with kids, and her fellow upstate New Yorkers (“toothless, dip spit swallowing, cousin loving, fifth grade education, non-recycling hicks” who “want more guns and anti-abortion laws”). Oh, and does she ever dislike men! To her, we’re all rapists, harassers, and abusers. In October of last year, Lagrave was on a hate bender after Brett Kavanaugh, the Pullman porter of the Rape Train Express, was confirmed to the Supreme Court. All throughout the month, she fumed and fumed about men. Rapers, gropers, pussy grabbers all!

Lagrave was a steam-spewing boiler, and she was ready to blow!

On Oct. 20, she visited a Plattsburgh nightclub with her girlfriend for a girls’ night out. While sitting at the bar, Lagrave executed a “sisters are doin’ it for themselves” pirouette and puckish hair flip, because there’s no reason not to look cute while you’re hating on your fellow humans. Impressed, Lagrave’s girlfriend gave her a playful slap on the ass, as if to say, “You go, girl.” And go Lagrave did. Oblivious to the fact that the butt-slap had come from the woman sitting right next to her, Lagrave charged at the first man she saw. That man happened to be the club’s bouncer, a tall white dude who was making the rounds, his back turned to Powerpuff Bimbo. Lagrave came at him from behind and, with all the strength she could muster, began crushing his neck in a choke hold. The bouncer passed out and hit the floor hard, as Lagrave’s girlfriend came up to her like, “ERRRR MERRRR GERRRRRD, whattre ya doin’, girlayyy?”

Lagrave felt the butt-pat and, already seething with hatred for men, assumed it just had to have been a molester, so she attacked an innocent male bystander. For his part, the bouncer told police that the attack from behind was so unexpected, he thought it was a friend playing a joke, and he didn’t start to resist until he began losing consciousness. To be fair, Plattsburgh has only 19,900 residents and is 90% white, so I don’t exactly blame the bouncer for being lax.

Lagrave didn’t try to pull off a ridiculous face-to-face punch-off like the hot dog brawlers. She Emma Peeled the guy from behind, and it worked. That’s reality, too, and it hit a bro hard. Yes, a 125-pound girl can take down a bigger man…under the right circumstances.

Initially, Lagrave hailed herself as a hero. A fighter for GRRRRRLs worldwide. But then the cops looked at the club’s surveillance video, which is as plain as day (the white-bread nightclub was so well lit, and the patrons so stiff and placid, nothing obscured the footage. No offense, Plattsburgh, but your nightlife looks kinda faggoty from this L.A. boy’s perspective). There’s no ambiguity; Lagrave’s girlfriend did the ass-slap while the bouncer was just walking by, minding his own business. So the cops told the local press that Wonder Woman might actually be Blunder Woman (pretty clever, huh? Huh?). Lagrave contacted the local paper and demanded that they retract the story about the security video clearing the bouncer. She said the video showed nothing. The bouncer had “sexually assaulted” her, and everyone should just take her word for it.

Then the cops released the video to the media, and perhaps somewhat coincidentally Lagrave ceased giving interviews.

Just one week before the strangulation incident, Lagrave had posted on Facebook, “No one, especially not the criminal justice system, believes a woman when she tells people she was inappropriately touched!!!!” And here she was, having falsely told the criminal justice system that she was inappropriately touched. No Hollywood writer could have invented something so beautifully ironic.

Lagrave was charged with felony strangulation. If convicted, she faced up to seven years in prison.

Ready for more irony? Those “toothless, dip spit swallowing, cousin loving, fifth grade education, non-recycling hicks” in Plattsburgh let her off scot-free. Yep, the local prosecutors ended up being woke AF. “She meant well,” they said between swallows of dip spit, and just a few weeks ago, they dropped the strangulation charge entirely, allowing her to plead to “obstruction of breathing,” a toothless charge usually reserved for dominatrices who go too far while Carradine-ing their willing clients. Zero jail time. Not one day. A year’s probation, that’s it.

It’s good to know that you can totally strangle an innocent guy in Plattsburgh as long as it’s in the name of social justice. Kierah Lagrave (who ignored my multiple requests for comment) isn’t nearly bright enough to comprehend the irony that she was saved from prison by the very hicks she loves hating on social media. But we can grasp a few lessons from this amusing episode.

The two hot dog bims who took on Andre the Giantarian confused movie-real (Cameron Diaz punching a pro wrestler through a wall) with real-real, and they paid the price. Kierah Lagrave, who took a guy down in a manner that actually works, nevertheless tried to fight reality too: the reality of the security camera video. She wanted “her reality” to be the accepted reality. “I don’t care if the video shows he didn’t touch my butt. I say he did, and that means he did, even if he didn’t.” And the damn thing is, she got her way. The prosecutors decided that “Kierah reality” takes precedence over real reality.

Reality may hit you hard, bro, but you can hit back via decree. Government can’t regulate reality, but it can regulate what we acknowledge as reality. So if a bunch of “woke” prosecutors decide that a strangulation isn’t a strangulation because social justice, that becomes the official truth.

Last week, apparent TV star and supposed hate-crime victim Jussie Smollett, who is black and gay, refused to turn over his cell phone to Chicago detectives to aid in their investigation of his alleged assault. Smollett claims he was assaulted by MAGA Klansmen at 2 a.m. on a Chicago street. He also claims to have been on the phone as it occurred (so the phone records are rather important evidence). But he wants the cops to take his word for it. They need to accept his reality as theirs. Amazingly, Chicago PD Superintendent Eddie Johnson agreed, claiming that requesting evidence from Smollett is tantamount to “treating him like a criminal.”

Yes, collecting evidence is now racist, just as it was sexist for the Plattsburgh cops to rely on the security video rather than Lagrave’s word.

So I’m amending what I wrote in my column last week. Reality doesn’t always win. In a street fight, sure. But against ideologically influenced attorneys, bureaucrats, and cops? Against an enforced, state-sponsored worldview?