The Sorrows of Young Nimrod the Toady 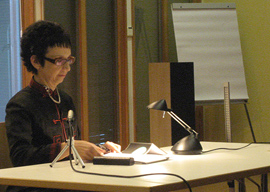 “I hope the reader of a later age will pardon me for detaining him with persons of whom he has never heard.” —Schopenhauer

If it’s true, as some people say, that one’s name, like character, determines one’s destiny, then perhaps the aptly named Nimrod Reitman was doomed to live a foolish life from the beginning. “In Hebrew and Christian tradition,” Wikipedia informs us, “Nimrod is considered the leader of those who built the Tower of Babel….” Like his namesake who is believed to have led that unfortunate project, Nimrod Reitman is a devotee of exceedingly ambitious nonsense, and like many an ambitious and goal-oriented scholarly cant-peddler, he was groomed by the most distinguished of asses.

For Reitman was the student of Avital Ronell herself. Ronell teaches humanities at NYU and—oh rank of ranks!—is the Jacques Derrida Professor of Philosophy at the European Graduate School. Reitman was also her friend. Worst of all, perhaps, he may have been her victim. Writing in Washington Square News, NYU’s independent student newspaper, a trio of journalists—Jemima McEvoy, Sayer Devlin, and Kristina Hayhurst; two women and a man of yellow, happily!—report:

Ronell—a leading feminist scholar—was Reitman’s doctoral advisor…. [He] alleges that over the course of three years, starting in the spring of 2012, the professor nonconsensually touched his body and kissed his cheeks and lips on many occasions. On one occasion before he officially began his doctorate program, Reitman alleged that in Ronell’s apartment in Paris, she “…touched his crotch over his clothes, with her buttocks, by pushing her body into his.” Among descriptions of similar encounters, he said Ronell made him lie in her bed, refused to work with him if he did not reciprocate and emailed and called him constantly.

Reitman also alleged that Ronell stalked him, sexually assaulted him and retaliated against Reitman by negatively impacting his professional career. NYU’s report did not find sufficient evidence to deem Professor Ronell guilty of those claims, according to the investigation report that follows the complaint Reitman filed in 2017, two years after graduating.

However, the investigation did find sufficient evidence for inappropriate verbal contact, such as “inappropriate” texts to Reitman over the three-year period that called him her “baby love angel” and said “I wish I could kidnap you,” through dozens of emails and some voicemails from Ronell.

“In academia, to be sure, student toadying and professorial bullying and humiliation go hand in hand.”

The report lists 44 other similar statements sent by Ronell to Reitmen, including “now let’s cuddle like cubs,” and “time for your midday kiss. My image during meditation: we’re on the sofa, your head on my lap, stroking your forehead, playing softly with your hair, soothing you, headache gone. Yes?”

No! cries the delicate Reitman, nonconsenting since Ronell is about as attractive as a rotten prune (indeed, she even looks like one). But make some popcorn, my dear readers, because the story gets better still. “Reitman…has a husband,” says our diverse journalistic trio, “and Ronell…identifies as queer.” Ah, one day the whole bunch shall have their own reality television show, let’s hope.

There is abundant evidence that Reitman sent Ronell lots of his own sweet nothings, many of them en français. Furthermore, as we read in the “Press Release on Behalf of Avita Ronell,” “almost all of the emails from Reitman included a request to review and edit his writings.” Finally, Reitman waited “two years after graduating” to file his complaint. In view of all this, it’s difficult to resist the conclusion that—like many of Harvey Weinstein’s accusers—whatever may have actually happened between himself and Ronell, the man had no problem with it so long as he thought it was advancing his career.

Despite getting his Ph.D. in 2015 after writing a voguish and sadistically unreadable dissertation on “covert maternal tropologies and disruptions effected by femininity in theories of subjectivity,” Reitman did not land a tenure-track job. And though he might have found work in a field suitable to his talents—as a circus clown, for example—Reitman has filed a multimillion-dollar lawsuit against NYU. What convenient timing!

Typical academic toady that he is, Reitman sought to achieve Success by sucking up to a most accomplished sophist. But fate dealt a cruel blow, he wants us to believe: The poor fellow was harassed! Yes, he was taken advantage of. Violated. His dignity sullied. Now he weeps and he wails: “You are not required to complete the toadying, but neither are you free to desist from it.” “In a place where there are no men, strive to embody maternal tropologies.”

Still, take heart, O you moralists, because with Kravet & Vogel on the job, Reitman will probably get a hefty settlement, at least. After all, does he not deserve millions for enduring Ronell’s prose style alone?

But though I may be wicked, I do value the truth, so let me be clear that, even if Reitman is motivated by sheer opportunism, it doesn’t necessarily follow that Ronell did not exploit him. Rightly or wrongly, Ronell does have a reputation for inappropriate behavior with students. And even if Reitman did allow himself to be exploited, this doesn’t mean Ronell was right to exploit him and/or others, if she did so.

Ronell has been suspended for a year. She denies having done anything inappropriate to Reitman, and it wouldn’t surprise me if she’s innocent of sexual harassment, though she may have bullied and humiliated Reitman, and her reputation for bullying and humiliating students may be deserved. In academia, to be sure, student toadying and professorial bullying and humiliation go hand in hand. The tragicomic thing is that, most of the time, the students don’t even realize that the esteemed figures who are making them so miserable are usually conceited fools who, far from meriting reverence, deserve to be regarded with open contempt.

Ronell claims that her language was merely “flamboyant.” That word illustrates the general absurdity of this situation, which for me is the real story here. Why, one wonders, would a gay man who “has a husband” and a woman who “identifies as queer” engage in “flamboyant” flirtations? The answer, besides possible careerism on Reitman’s part, is that for gay lefties such behavior is supposed to be a sign of moral sophistication: “playfully transgressive of heteronormative binaries,” etc., etc., ad nauseum.

That Ronell is considered “a star professor” is a testament to the terrible decline of academic standards and to the general backwater that is non-STEM academia. Like so many scholarly pretenders, Ronell fancies herself some kind of thinker, or rather, a “theorist,” as academic cattle like to call themselves. Thus, she is given to shallow, obscure, and unintentionally funny paradoxes such as “if we could communicate, we wouldn’t need to communicate.”

In short, Ronell’s method—qua “theorist”—is fundamentally dishonest: She uses vague language to dress up an imprecise and confused idea, which impresses nobody but fellow genteel blockheads. How silly! thinks the young graduate student, not yet devoid of all common sense; but then, observing the other anxious monkeys playing along, he affects to be mightily impressed.

Ronell studied with the master charlatan himself, Jacques Derrida. Derrida’s best critics, so far as I know, are philosophers John Searle and Raymond Tallis. Each has demonstrated the gross misunderstandings and fallacies in which Derrida trafficked, and for which he is celebrated. Yet the best comment on Derrida belongs to Noam Chomsky, who accurately described what is not sheer nonsense in the pseudo-philosopher’s work as nothing but “complicated truisms.”

Shortly after Reitman alleged that Ronell had sexually harassed him, Judith Butler wrote a letter in defense of her fellow eminent fraud. It was signed by Slavoj Zizek, Gayatri Chakravorty Spivak, Jonathan Culler, and many others: a multicultural gallery of distinguished dunces and mock rebels. The final paragraph reads:

We testify to the grace, the keen wit, and the intellectual commitment of Professor Ronell and ask that she be accorded the dignity rightly deserved by someone of her international standing and reputation. If she were to be terminated or relieved of her duties, the injustice would be widely recognized and opposed.

“Oh, do stay a little longer and have one more cocktail, my daawling! I’ve long admired your work, and we won’t see each other again until next year’s conference.”

Brian Leiter, a professor of law and philosophy at the University of Chicago, commented witheringly on “the hypocrisy and entitlement of these precious ‘theorists’”:

We may put to one side that Professor Ronell’s “grace,” “keen wit” and “intellectual commitment” are irrelevant in a Title IX proceeding. What is truly shocking is the idea that she is entitled to proceedings that treat her with “the dignity rightly deserved by someone of her international standing and reputation.” Apparently in the view of these “theory” illuminati dignity in Title IX proceedings is to be doled out according to one’s “international standing and reputation.” So while Professor Ronell “deserves a fair hearing, one that expresses respect, dignity, and human solicitude,” other “lesser” accused can be subject, without international outcry, to whatever star chamber proceedings the university wants. Moreover, only one outcome of the process is acceptable, regardless of the findings: acquittal. Any other result “would be widely recognized and opposed,” I guess because grace, wit and intellectual commitment are a defense against sexual misconduct and harassment.

What’s that you say? Feminists and their last man lackeys are utter hypocrites? They wish to use Ronell’s stature to justify her behavior, exactly what the allegations and the lawsuit accuse her of exploiting? They spend their lives chattering about “social justice,” while being shamelessly and obliviously immoral themselves? Well, I have never been so…absolutely unsurprised.

In our time, the trouble for most professors is that they really have nothing to say. That is why their “original contributions to scholarship” are either middling or downright contemptible. Why, it’s almost as if these “experts,” who are forever busy with their “research,” should be devoted to teaching students, of all things!

Moreover, since, deep down, they despise each other, the poor wretches find that, besides the money and agreeable work hours, sleeping with attractive students is about all academia is good for.

Hence the problem, for male academics in particular, with the #MeToo movement. If feminist women academics were really progressive, they might do us all the service of wearing muzzles, at least in their professional capacities. As it is, sexual harassment is the only way to make them interesting, like prodding a scorpion with a stick.

Myself, I am committed to sexually harassing all feminists, especially academics. This is a twofold good. You see, I give these desperately unhappy creatures something to complain about—which saves them from boredom when vanity won’t do the job—even as I minimize discrimination against the ugly. There remain, however, a great many ugly, and therefore neglected, feminists. What, then, is to be done about this widening sexual-harassment inequality?

Anyway, at least feminism is evermore efficient. For today there is no need for a woman to marry a rich man for his money. She can simply accuse him of sexual harassment, then sue. And if feminist women heroes fail to inspire, there’s always the example of womanly men like Nimrod the Toady.