The Trans-Continental Railroading of America’s Girls 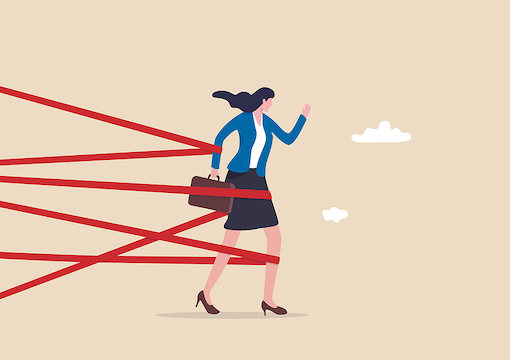 This week’s column might come off as mawkish, but I’ll take that risk, as I want to revisit last week’s theme from a more personal angle.

I’m writing this on what would’ve been my mom’s 91st birthday. And next week will be the seventh anniversary of her passing.

So she’s very much on my mind.

“Modern-day identity hustlers defile the memory of those who dealt with genuine discrimination.”

As I’ve mentioned in previous columns, I come from a long line of Marxist Ashkenazi “revolutionaries.” Old-school ones, from Europe in the 1800s and NYC in the 1900s. Trade unionists, pamphleteers, professors.

One thing my mom learned at an early age is that Great Marxist Men™ are not always good to the women in their lives; they’re too busy “saving the peeple” to worry about whether they’re harming the individual “peeple” in their personal lives.

“Sit down and shut up, bitch. Can’t you see a GREAT MAN is hard at work spreading kindness and equality?”

My mom grew up rejecting the familial politics because she saw its insincerity. As an adult, she eschewed all manner of lockstep political and ideological dogma (a guy like me—an internationally reviled Jewish Holocaust revisionist by age 20—comes about two ways: either because he rebelled against his family, or because he was raised to say, “Screw popular opinion, follow your convictions.” Thankfully, I was in the latter camp).

After mom graduated high school (Erasmus, in Flatbush), she had to wait a year before the college of her choice finally accepted women. And after college, she realized that a lot of the companies she applied to (a hugely talented illustrator, she wanted to work as a commercial graphic artist) didn’t accept women in positions other than secretary.

Today’s identity politics are a cesspool. But we can’t forget that there was a time when one’s race or sex meant “you don’t get the job.” Modern-day identity hustlers defile the memory of those who dealt with genuine discrimination.

By hard work and sheer talent, my mom ended up becoming the first female graphic artist in history to design for every major theme-park chain in the U.S., from Disney to Sea World, Six Flags, Universal Studios, Knotts Berry Farm, MGM, and every Las Vegas “theme” hotel.

She even did the graphic art for Dollywood, Cracker Barrel, Graceland, Opryland, and (gotta laugh about this one) Stone Mountain. Those Confederate logos (back when that was still allowed to be the park’s theme) were drawn by a Brooklyn Jewish woman.

My mom loved the South and found the people there to be the kindest folks on earth (as a kid, I was with her when Dolly gave her the specs for the logo and stressed how important it was that her ample bustline not be prominent in the illustration because the park was family-friendly).

Mom worked hard to achieve her success. She never once got hired by consent degree, court order, or affirmative action; those things didn’t happen in those days. She got hired because she was one hell of an artist and if some chauvinistic schmuck was like, “We don’t hire broads here,” her work would instantly cow the bastard into changing his tune.

And it does need to be said, the discrimination she faced was genuine. It was the real kind, not the present-day HuffPost and Atlantic bullshit (“Hating pumpkin spice is sexist!” “Air conditioning is sexist!”). She dealt with sexual assault as a young woman, and a violent, domineering first husband (my Elvis-murdering Beverly Hills doctor-dad), in an era when women didn’t have a lot of advocates in such circumstances.

Alzheimer’s is a monster. But perhaps it’s a small mercy that it took my mom before she had to endure today’s daily propaganda parade about how any dude in a wig and dress must—must—be considered every bit as much of a woman as actual, for-real women like my mom. A biological male spends thirty years as Biff McBallsack, but then he applies lipstick and changes his name to Viveca Vajayjay and we’re all supposed to act like his accomplishments and challenges are 100% equal to what actual women have had to face.

I’ll admit, I take this tranny nonsense personally. When some mentally ill 40-year-old “call me ma’am” dude in a dress or some attention-starved teenage loser partaking in a gender-bending fad because it makes him feel special claims that he’s the equal of my mom in terms of his “pioneering bravery” and the “struggles he faced,” and when social media tells me I have no choice but to agree, it gets under my skin in a way most other issues don’t.

Were my mom alive today, watching women forced to compete against tranny men in high school and collegiate women’s sports, seeing genuine, biological women lectured by leftist millionaire men in politics and the media to keep quiet, swallow their grievances, and take second place like a good little girl—“We’re ordering you to be deferential to these men in wigs”—she’d be furious.

A new generation of women being told by Great Marxist Men™ to “sit down and shut up, bitch. Can’t you see a GREAT MAN is hard at work spreading kindness and equality?”

I’m glad she’s not here to see it.

Last week’s column dealt with the posturing tough-guy rightists who react to tranny domination of high school and college women’s athletics by saying, “I won’t fight for these kids if they won’t fight for themselves.” And since that column, with tranny “Lia” Thomas’ NCAA win, even more high-profile rightists, including Fox News/Washington Times empty-suit empty-head Tim Young, have adopted that position.

So that’s the right’s official party line now? “I, an adult, won’t fight if children and teens won’t fight alongside me. My dedication to this existential battle is so razor-thin that if a high school senior won’t stand with me, I’m out.”

That’s the language of impotence and incompetence. People too feeble and stupid to effect change always excuse their failures, and shirk their labor, by saying, “Hey, you know what? If you people want this done, do it yourselves.”

Let’s extend that argument to all issues of importance, okay? Why fight for border restrictions? If the American people don’t want illegal immigration, let ’em fix it themselves, individually. “If Joe Bluecollar isn’t willing to quit his job and drive his van down to the border to personally chase away illegals 24/7, fuck him. Sure, he’ll go broke and maybe get killed by cartels, but hey, if he doesn’t have that level of dedication, no way I’m fighting for such a coward.”

This is how inept, weak blowhards excuse their failures and excuse themselves from having to succeed. And it’s born from a rightist machismo that, if we look at the historical record, is always beaten by leftists who value long-term results over short-term grandstanding.

My very first Takimag column, seven-plus years ago, contrasted how the Soviets and the Americans treated captured Nazis at the close of WWII. The Americans were like, “Yer a NARZI? Up against the wall, scum! RAT-A-TAT-TAT!”

Conversely, the Soviet method was, “You’re a Nazi? Welcome to our reeducation camp. In a year, you’ll be parroting our propaganda and you’ll thank us for our benevolence.”

The tough-guy Americans defined victory as “We blew yer asses away.” The Soviets saw victory as “You were our enemy; now you serve us and parrot our propaganda.” All you guys who talk about “owning the libs,” what’s more of an “own”—killing a foe, or making them kiss your feet, willingly, because you destroyed their sense of self?

If you understand the difference between how the Americans treated Nuremberg defendant Streicher (beat him, made black GIs urinate in his mouth, then killed him) and how the Soviets treated Nuremberg defendant Fritzsche (textbook reward/punishment psychological manipulation to force him to confess, repent, and agree to whatever reality his captors told him to accept), you’ll understand why the left wins the long war.

Yeah, you tough guys can kill a man with yer gunz.

Big fucking deal. Any ghetto thug can do that.

The left knows how to use reward/punishment to get people to say a man is a woman. And all this rightist tough-guy talk about “I ain’t gonna fight fer them girls if they won’t fight fer themselves” is nothing more than an admission of defeat. You’re not good enough, smart enough, or committed enough to win. You can’t effect change, you can’t fight the left’s ability to effect change, so you tweet about how it’s all the fault of teens.

“Why should I fight if the children won’t fight for themselves?”

If the leftist reward/punishment system of brainwashing can break a hardcore Nazi like Hans Fritzsche, it can certainly break an innocent teen. Konrad Heiden put it best in his June 1949 Life magazine piece about the Fritzsche interrogation techniques: “A prisoner of the NKVD has rights, and his supreme right is to give the right answer.”

Heiden could’ve been writing about how teachers grill female students today. “Are men in dresses women? You’re free to answer as you please. But with rights come responsibilities, like the responsibility to not be a fascist, murderous oppressor. And if you exercise your rights correctly, you’ll be praised and rewarded. The greatest right you have is the right to respond properly.”

The Soviets to Fritzsche: “Give the right answer and you’ll get access to food, bed, and a toilet, because you exercised your rights correctly.”

Today’s leftists to young women: “Give the right answer and you’ll get your social media and college scholarship restored. You’ll no longer have to fear Antifa threatening you and CNN ‘journalists’ researching your Twitter history and publicly attacking your family. You have rights; exercise them correctly, and all will be well.”

These are tried-and-true conditioning techniques, and Twitter-era conservatives aren’t nearly practiced enough to counter them. In their castrated frustration, all they can do is repeat the Principal Skinner meme, “No, it’s the children who are wrong.”

My mom was strong enough to overcome Marxist conditioning from family members and outright misogyny in the workplace. Were she alive today, she wouldn’t judgmentally condemn the young girls who are being berated, shamed, and threatened into “confessing” that they’re no more of a woman than a guy in a wig.

She’d support them. She’d stand by them. And she’d fight for their right to speak the truth that women are more than just a “social construct.”

Because my mom actually was tough. Not Twitter tough. Real-life tough.

And in 84 years she never sent a single tweet or got a single “like.” So maybe stop thinking that such trivial things are a measure of courage.