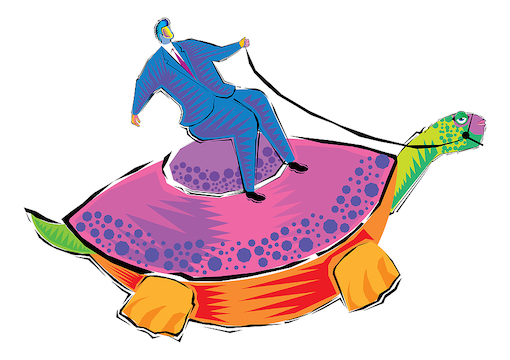 I don’t care for kids; that’s why I never had any. That said, in my early 30s I did have one brief episode of dealing with children. I dated a Dominican woman who had an 11-year-old daughter. The absentee father was white.

The kid was strikingly intelligent. It surprised me that I could carry on a conversation with her without having to speak condescendingly. I damn near thought, “Maybe children aren’t so bad.”

The girl was attending one of the most exclusive private academies in L.A.—the Oaks School in Hollywood. It was spring 1999. And the most brutal lesson I learned from helping this girl with her homework was that the school’s history curriculum was blatantly antiwhite. One evening, as I was assisting her with a lesson about America’s founding, she started weeping about how ashamed she was of her white ancestry. Because the lesson plan was basically “Genocidal whites slaughtered Injuns, ate their scalps, and raped their women.”

“Your ‘tough guys’ got their asses kicked by childless spinsters and epicene furries.”

This was an “elite” school. Parents paid for this.

I did my best to give the child some perspective, to counter the propaganda. But I knew that most of the kids in her class were being fed this hateful crap with no guidance at home to balance it out.

I’m telling this story to make a point: Leftist antiwhites have patience and focus. They have an agenda, and they put in the time to fulfill it. In 1999 none of the antiwhites were working their mischief in order to score social media cred. There was no social media. They weren’t doing it to win office or get on MSNBC; in 1999 Democrats still publicly eschewed antiwhiteness and MSNBC was still relatively balanced ideologically.

In 1999 the antiwhites were doing it for the sake of it. Quietly, to achieve a long-term goal.

Focus? Patience? These are foreign words to certain rightists, the ones who loves quick fixes (a.k.a. idiotic ploys) and short-term gratification. They can “focus” about as well as a goldfish.

This breed of rightist can usually be distinguished by their “tough guy” posturing. And the Ukraine situation is bringing out the worst in them. These UFC wannabes have a mancrush on Putin; he’s so “based,” so virile. Hence why all of a sudden Tucker Carlson and other MAGA types are echoing Putin’s line about Ukraine being “Nazi” and how all violence is justified in order to “denazify” a country.

Welcome to TCADL (Tucker Carlson ADL). Yes, by all means, make “denazification” the ultimate human endeavor. No way that’ll ever be turned against…Tucker Carlson and his followers.

Tuck’s been especially fond of parroting Putin’s line about how Ukraine joining NATO would be just like Russia stationing troops in Canada.

Well…if the U.S. had invaded Canada and starved to death almost 4 million of its citizens, and if the U.S. continually made territorial demands of Canada even 90 years later, Canada would have a perfect right to ask foreign powers for protection. This moral-equivalence thing of Canada/U.S. vs. Ukraine/Russia is by-the-book leftism. I go back to that young girl’s lesson plan, which taught that there’s no difference, ethically, morally, factually, between American settlers clashing with Indians and Nazis running death camps.

Pilgrims vs. Injuns, Nazis vs. Jews. The exact same genocidal whiteness; no nuance.

And that’s Tuck’s take. Russia has done nothing in its interactions with Ukraine to merit Ukrainian mistrust. Hey—Russia genocided Ukrainians, but we disrespected Canadian lumberjacks in the Pork & Beans War.

Tuck (and all the Putin-fluffing rightists) can’t admit that yes, there is a difference between Russian troops on the Canadian border and Ukraine’s desire for a buffer against Russia. The U.S. is no threat to Canada, whereas Russia has absolutely earned Ukraine’s distrust.

To be clear, one can understand two things at once: Putin not wanting NATO next door, and Ukraine wanting protection from a hostile neighbor. But it’s the worst kind of subjectivism to compare Putin’s outrage over Ukraine’s Western overtures with U.S. outrage were Russian missiles installed in Toronto. Russia deserves its neighbors’ misgivings.

This is not to advocate U.S. involvement in the war. But one can argue against intervention without resorting to idiotic subjectivist arguments that mirror the worst leftist propaganda.

This is pure leftism. Reminds me of November 2015 when I responded to lefties who were criticizing the media for paying too much attention to the Paris terrorist attacks. “Third Worlders get attacked too,” the subjectivists cried. I responded:

What happens in Lesotho is not as important to the world as what happens in London. France is more internationally important than Togo. Admitting that isn’t racism, it’s reality. You don’t have to LIKE France, England, the U.S. or Russia to acknowledge that they MATTER. If President Howdydoo Ngbola of the Republic of Mbunghole were assassinated tomorrow, it would be page-five news, because presidents are assassinated in Mbunghole every year. But if the leader of a First World nation is killed, it’s justifiably page-one news. Even the people of Mbunghole don’t want to read about Mbunghole.

What we see with Ukraine/Russia is how easily rightists will adopt woke talking points to score quickie gratification and satisfy their fetishes (“based shirtless Putin!”).

“All ‘Nazis’ must be punched!”

“There’s no difference between Stalin’s Holodomor and our Canadian incursion during the War of 1812! We’re just as bad as the USSR.”

“The West is no more civilized and of no more importance than the lowliest African mudville.”

“DEATH TO WESTERN-CENTRISM! Aborigine tree-dwellers are our equals.”

Antiwhite leftists are laser-focused on specific long-term goals, whereas what passes for goals and principles on the right can change in one Twitter thread.

The fact that antiwhite propaganda in schools has gotten so bad that ordinary parents are rebelling against it is simply an example of the right’s failures. By the time you notice termites, they’ve won. If termites are almost collapsing your support beams, you’ve failed to protect your house. You should’ve dealt with the problem before things got that dire.

But termites are singularly dedicated creatures. They define focus. Rightist “exterminators” are incapable of focus. A Russian/Ukrainian conflict that, important as it is, shall pass, can make them team up with the termites.

Putin’s ability to distract rightist dullards is not unexpected if you know the psychology of these people. The right’s obsessed with tough guys and tough talk. What did the Trump experience teach us if not the extent to which tough words can placate rightists? In truth, Trump was one of the weakest presidents in history. He couldn’t stand up to his own son-in-law. He couldn’t stand up to the traitors he hired and could fire at his pleasure. He riled up a crowd on 1/6 and went home to watch TV. And did he support any of those people when they were put in solitary like the Unabomber? Of course not.

But he talked tough. Trump’s “mean tweets” warped both ideological poles: Leftists treated them like war crimes, rightists cheered them as substitutes for action.

Here’s a little secret from a former GOP operative (me): Conservative tough guys are the biggest marshmallows on earth. Full of bold words, but when it comes to race, they’re rodentine cowards. Not to get too self-indulgent, but I saw this firsthand when the HuffPost called me a “Holocaust denier” in 2013. The first conservatives to publicly brown their trousers and disown me to please the libs? Andrew “I’m tough as John Wayne” Klavan, Kurt “thank me for my service” Schlichter, and Nick “most balls-out rightist in Hollywood” Searcy. Now, I like Nick. Nick’s a good guy. But for all his bluster, when Marxist Mexican filmmaker Guillermo del Toro asks him to portray a caricature of a fascist American, Nick responds “¡Sí comrade!”

And National Review’s Michael Walsh? A “tough guy” who loves posting photos of himself posing with guns? He’s the one who “outed” me to the press because things I said about Auschwitz thirty years ago made him cry like a toddler.

My personal experiences aside, these “tough guys” also run screaming from VDARE and AmRen. When it comes to racial issues, these self-styled “hard men” are squishy rabbits. That’s why, as they’ve been blustering about their “toughness,” obese cat ladies, mentally ill trannies, and effeminate pencil-pushing would-be commissars have taken over school boards to warp your kids, not just regarding race but gender as well.

Your “tough guys” got their asses kicked by childless spinsters and epicene furries.

You can’t possibly be proud of that, can you?

A cat lady with instinctive, fanatical focus will always beat a posturing tough guy whose principles and nerves are so weak that he’ll reverse himself, or wet himself, at the drop of a hat.

What I’m trying to convey is that the posturing, fun as it may be to watch, is not just meaningless, but detrimental.

A few weeks ago popular conservative radio host Jesse Kelly—another “tough guy”—announced that he was not interested in helping female teen athletes who are forced to compete against men in wigs because the youngsters are often too scaared, too cowed, to lead the fight themselves. If those kids aren’t willing to risk everything, why should he champion them?

Don’t care. No organized boycotts from the women. Nobody wants to put their names on a story. I will not stand up for people who won’t stand up for themselves. Go and hide. Watch your sport be destroyed. The Era of Cowardice. I see it everywhere and I despise it.

Wotta tough guy! Why should Jesse Kelly fight for kids if kids won’t fight for themselves?

And here we see the stark contrast between the posturing right vs. the goal-oriented left. Lefties don’t get angry at kids for not being down with their agenda. Rather, they say, “I will make you down with it. Slowly, over time, I’ll bring you around.”

“You expect me to effect change? Not when I can tweet about how much tougher I am than a teen girl.”

Tough guy posturing vs. slow and steady, there’s no contest.

Slow and steady wins the race…war.