The Holocaust Is Not the “Pill” to Die On 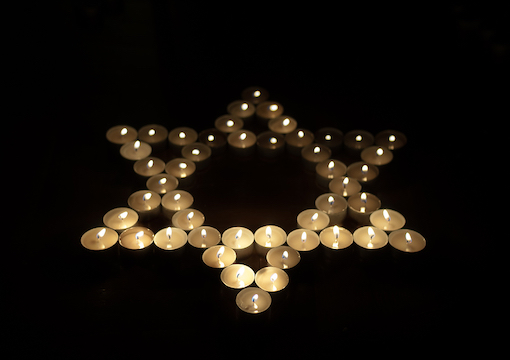 Last week I wrote about how the Tennessee Board of Judicial Conduct, following a review by an investigative panel, declared that I’m not a Holocaust denier. After the column posted, a half-dozen old friends peckered their way out of the woodwork to say howdy. “Gosh, Dave, I missed ya, buddy! Weird how I haven’t been in touch since your ‘outing.’ But for some odd reason I now feel totally comfortable reaching out to you again!”

How fortunate I am that folks may no longer feel the need to disavow me. Ah, there’s that word: “disavow.” We’ve been hearing that a lot recently, and often in association with the Holocaust. Michelle Malkin caught hell last month for not “disavowing” groyper troll Nick Fuentes. And now other rightists are catching hell for not “disavowing” Malkin. And it all started with Fuentes appearing to advocate Holocaust denial on his podcast (vaguely referencing my work in the process).

I was asked last week by one of my magically reappearing friends if I “disavow” Fuentes (and by extension Malkin), now that I’m a certified non-denier. I told him I don’t “disavow,” period. If I think someone’s wrong, I say they’re wrong. If I think they’re stupid, I say they’re stupid. But “disavowing,” or forcing others to disavow, is childish and pointless. “I disavow you for saying something foul. Oh no, I just said something that you think is foul and now I’m getting disavowed! Well, sir, I disavow you for disavowing me. And anyone who refuses to disavow you will be disavowed by me!”

If you find that type of exercise in head-banging futility entertaining, knock yourself out. But it’s not my cup of tea.

That said, on the Holocaust Nick Fuentes is wrong and stupid. I know kids like him; they reach out to me all the time. They talk about the “Holohoax” and how Holocaust denial is the ultimate “red pill.” Sure, Fuentes’ defenders might claim that his “Holocaust cookies” routine was mere parody, but as the “based Jew” who’s usually cited on the topic, I don’t believe it was parody at all. Fuentes was parroting the standard denial script, and his “ironic” delivery doesn’t change that fact.

There’s this one young fella—I won’t name him, but he’s very well-known on the right—and he looks at me as his ultimate “red piller.” And no matter how many times I tell him to his face that the Holocaust happened, that it’s not a hoax, and that I never said it was a hoax, he doesn’t believe me. “Right, it ‘happened’!” he winks, as though my denials of denial are part of some coy little game I’m playing. I can explain the historical facts to the guy till my face turns blue, but it doesn’t matter. He’s not interested in the facts. For him, and for an entire subspecies of far-right millennials, Holocaust denial has become a gimmick, a way to make the stuffy elders tear their hair out in rage.

It’s the ultimate way to say “Look what a naughty boy I am,” as evidenced by the smirk on Fuentes’ face as he performed his Holocaust “parody,” a smirk every bit as irritating as the one sported by Adam Schiff when he denied knowing the identity of the whistle-blower.

Seriously, does anyone ever find that “smirk” thing charming?

To be sure, Holocaust denial certainly is a way to provoke rage, especially among mainstream conservatives. I was reminded of that last week as Andrew Klavan, that irrelevant refugee from the detritus of Roger Simon’s deceased PJ Media empire, podcasted about how we must “teach the children” to be like John Wayne—strong, steely paragons of manhood who stand firm and “boldly speak the truth” even under threat of being “crushed by an angry mob” for their beliefs. Manhood! Truth! Strength! And resist the mob when it tries to silence you!

“There’s no upside to playing around with denial; embracing it indicates poor cognitive skills and even worse judgment.”

This is the same Andrew Klavan who, in 2013, based on nothing more than a few articles about me in the leftist press, called me “an offense to God” because of my Holocaust views, as he urged conservatives to disavow me because unless I’m banished, “the media will try to tar us all!”

This is why Holocaust denial is such a fun thing for these groyper kids to play around with. Here’s big bad Andy Klavan (Reverend Kane from Poltergeist II but less attractive) going on about John Wayne and how we must stand strong and not bend to the angry mob. But the minute he hears “Holocaust denier,” even from a far-left source, he becomes a shrill little pansy, hiking his skirt and standing on a chair, urging other conservatives to cower lest they be “tarred by the mob.”

If you’re a young, headstrong Trump-era nationalist, why wouldn’t you want to taunt establishment conservatives by saying exactly the things that turn them into apoplectic cowards who slavishly beg the left not to “tar” them? Who in the groyper clique doesn’t want people like Klavan and Shapiro calling them “an offense to God”? Coming from those phonies, it’s the highest compliment, the shiniest badge of merit.

I get the appeal. But take it from the “based Jew”: This is not the hill to die on. Holocaust denial is wrong. I mean factually wrong. If you’re gonna get a person of value like Michelle Malkin mixed up in your madness, do it for something that counts. I’m the first one to say, go to the mat for the truth, and lose friends if you have to. But don’t kamikaze yourself for a lie. All those denial talking points that Fuentes recited in his “parody” are false, like the claim that there’s a Red Cross report that “proves” only 300,000 people died in the Holocaust. That sumbitch is one of denial’s most stubborn and pernicious lies. There is a specific Red Cross report that covers registered inmate deaths in the Western concentration camps (which the Red Cross had access to), but that report doesn’t cover (nor does it claim to cover) the Eastern Front and the occupied East, which is where the Holocaust took place. Deniers who use the “Red Cross report” to bolster their views do nothing more than expose themselves as idiots who are unaware that the European Theater had two fronts.

Invoking Holocaust denial does nothing more than distract from the genuine issues facing America today—issues involving immigration and the gradual (and in some cases speedy) Third Worlding of the West. There’s no upside to playing around with denial; embracing it indicates poor cognitive skills and even worse judgment.

Yes, actual Holocaust revisionism (not denial) is a fascinating field and a worthwhile endeavor. But if you’re looking to advance some nonsensical claim that only 300,000 Jews died due to epidemics caused by Allied bombing, you’re not going to find backing for that from any serious revisionist. Tens of thousands of Jews did die at the war’s end from diseases prevalent in desolated Germany. But years prior, healthy Jews were killed en masse at camps like Treblinka, Belzec, Sobibor, and Chelmno, as well as in the Ostland ghettos and on the Einsatzgruppen killing fields. By April 1943, the death toll from the premeditated murder of Jews was 2.4 million. We know that for a fact. And the war still had two years to go (although the death camps were halted in ’43).

That’s the accurate history of it. But the groyper kids don’t give a damn about history. As I said, it’s about being “punk rock” to the conservative squares whose edginess is as fake as the noses at the Beverly Hills High prom.

To be fair, it’s not just right-wing millennials who play this game. When a guy like Ron Unz wants to trumpet how “based” his website is, he pens a 17,600-word Holocaust-denial rant that employs the only technique more annoying than Fuentes’ smirking “satire.” And that’s the “Oh, but I’m only asking questions” facade.

As with Fuentes’ “satire” burlesque, does the “I’m only asking questions” act have any fans out there?

You know what? Maybe all those black-on-white crime stats are cooked. Maybe it’s whites faking claims of being victimized by nonwhite criminals. Remember Susan Smith? Killed her kids and blamed a fictional black man…or Jennifer Wilbanks, the “runaway bride” who faked her own kidnapping and blamed fictional Mexicans. And maybe those black-on-white crime stats are FBI falsifications. I mean, look at all the other times the FBI lied to us. Why would they be truthful with crime stats? Hey, don’t get mad at me—I’m only asking quuuuuuuuestions!

Annoying, isn’t it? Well, that’s what people like Unz sound like to me when they spew Holocaust denial under cover of “just asking questions.” Yes, questions are important. But someone who’s sincerely asking a question will sincerely examine the available answers. And if the questioner disagrees with the answers he finds, it’s up to him to explain why. When Holocaust deniers resort to the “questions” shtick, it’s always because they can’t explain away the contemporaneous German documents that detail the mass killing of Jews. “Muh questions” is a distraction from the fact that they have no rebuttal to the evidence in the archives.

I’ve written many pieces about how the left, the neocons, and Jews of all stripes use and abuse the Holocaust for their own aims. Now it’s the far right’s turn. Denial is a dead-end street, and it doesn’t matter how you couch it, as “parody” or as “questions.” Dabbling in denial will give your critics something legitimate with which to cudgel you, because Holocaust denial is not supportable by facts. Don’t endanger your agenda by embracing nonsense simply because you want to look based or “naughty.” There are plenty of “dangerous” topics that can be intellectually defended from a rightist perspective: interracial crime, race and IQ, and the effects of Third World immigration on a civilized nation. Go to the mat for those. Defend the free-speech rights of Holocaust deniers (as I’ve done for thirty years), but don’t confuse them being censored with them being right.

And don’t expect more from Holocaust revisionism than it can give you. Revisionism has enriched and strengthened World War II historiography, and if you truly want to learn about it, read David Irving, Mark Weber, and me. But you’re not gonna get “Holohoax” from any serious scholar. You want a “victory”? Okay—Auschwitz wasn’t an extermination camp, the 6 million figure is too high, and the Auschwitz, Majdanek, and Dachau “gas chambers” are phonies. There, you got your victory. Yipidee-doo, go out and celebrate.

And then move on to the things that matter, because if you really believe that the entire West is in jeopardy, then the battle is bigger than you and your petty desire to look dangerous and edgy. And if your self-indulgence leads you to advocate baseless, irrational pseudo-history, then you’re part of the problem, not the solution…“final” or otherwise.