The Groypers of Wrath 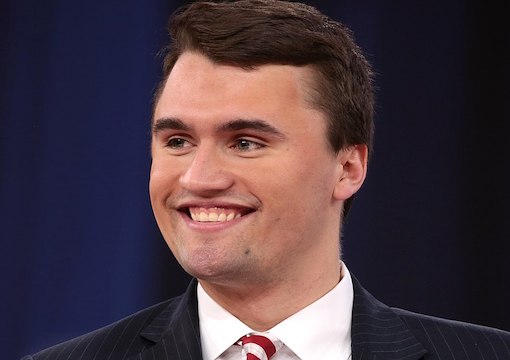 You know the difference between an album and a concert? With an album, the idea is to create something with staying power. The music is meticulously recorded, mixed, sweetened, and preserved for repeated play. An album is timeless. I have friends who still play old vinyl. And I know “zoomers” who still listen to those great old songs, but digitized and delivered wirelessly.

But a concert is all about the moment. It’s about the physical sensation of being there in that big airy amphitheater or that cramped little club. It’s about getting high or drunk and totally losing yourself in the visceral rush. You wake up the next morning and all that remains is the memory. It was fun, but it’s over.

What a concert we’re experiencing right now. I mean us righties. Have we ever had more fun? Groypers vs. Kirk! Meme wars! Autists and trolls! And those riotous insult comedy Trump tweets!

The problem is, while we’re having fun at a concert, the left’s cutting an album. Three generations from now, what will American kids be listening to? Trump’s tweets? Frog memes? Or the sound of Third Worlders jabbering on every Main Street in the U.S.?

Regarding immigration, what structurally has changed under Trump? We don’t have a wall…we don’t even have any new wall being constructed. Chain migration? Still chuggin’ along. Birthright citizenship? Unchallenged. Amnesty laws? Still lettin’ ’em in. It’s often said that leftists can’t meme. Guess what: They don’t have to. The current course of events favors them. In terms of numbers pouring into the country and birth rates exploding within, all the left needs to do is nothing, because they’ve already set the wheels in motion. Leftists cried and wailed that night in November 2016 because they thought Trump was going to build a dam to stop the raging river they’d loosed.

Yeah, the groyper thing is fun. Watching Charlie Kirk stammer and sweat and say “Evropa” as he gets chased off stage is a rollicking good time. But what’s it accomplishing? Oh, I know what you’re saying: “We’re fighting Conservative Inc. We’re getting rid of those whose support for immigration control is half-hearted or based on the ‘wrong’ reasons.”

Joe Stalin shakes his head in hell. You don’t purge until you’re firmly in power. Trump should absolutely push for purity within his administration. But regarding activists, supporters, and, most of all, potential voters, we’re not nearly secure enough to start cleansing those ranks. Why start this civil-war business now? The immigration policies that Trump campaigned and won on can be and were supported by people with a variety of motivations and ideological underpinnings. Keep in mind, many of the commonsense immigration restrictions and reforms that Trump championed in 2016 are things Democrats used to support. And we haven’t enacted those restrictions and reforms yet.

And next year we’re going to have to go back to the general public for a vote all over again. So why start splitting the right over “proper levels” of immigration righteousness?

“Being an agent of destruction is way too popular an occupation on the far right these days.”

I’d respectfully suggest that the current excitement over the “groyper war” is an expression of frustration. Impotence, even. The God Emperor has not delivered (yet). The Democrats, the media, and the cheap-labor GOPs are unmovable in their opposition. It’s frustrating; we don’t have a wall but we feel like punching one. Oh look, here’s someone in our midst who’s weak of faith. Let’s kick the shit out of him, for surely he’s the cause of our woes!

Chasing Charlie Kirk off a stage is no victory. Yes, it feels good. It feels like an accomplishment. But it’s “concert” fun. Fun for the moment. The poor schmuck thought it would be swell to answer audience questions. And when the groypers began asking, he did answer. They didn’t like his answers (I don’t like them either), and he proved an easy and touchable target. But I don’t think Conservative Inc. is shaking in its boots. We’ve had three years of Trump without any of the major changes he promised. Blame him, blame the people he foolishly surrounded himself with, blame the Republicans of the Ryan House, blame the Democrats who took over.

You wanna punch someone in frustration, and poor old Charlie Kirk stuck out his fat face and invited people to take shots. Enjoy the dunking booth. But if there’s even the smallest chance of making something out of Trump’s final one or five years, we’re going to need those whose opposition to immigration stops short of perfection.

As I’ve pointed out many times, 2016 did not give Trump a Reagan-vs.-Mondale-level mandate. Hillary was an execrable candidate and Trump beat her by tens of thousands, not hundreds of thousands, of votes in swing states. It’s a risky strategy to attack or dismiss people who support some level of immigration restriction because they’re not “hardcore” enough (especially regarding matters of demography and race). Don’t kid yourself that all those blue-collar whites in the rust and dairy belts are ready to go full Wilmot Robertson. To be sure, anti-immigration is a winning issue among swing-state whites. But if those voters’ anti-immigration sentiments are based on the fear of being displaced by foreign workers as opposed to anxiety over the projected national mean IQ in 2050, do you want to tell them to piss off?

“Take your pro-Trump vote and shove it; you’re not anti-immigration for the ‘right’ reason. We don’t want you.”

“Big tent Republicanism” is a recipe for failure. But “big tent immigration restrictionism” isn’t such a bad thing. The voter who favors Trump’s immigration policies but not because of demographic replacement fears still has value.

To be absolutely clear, my sympathies lie squarely with VDARE and AmRen and the rightists who (to reference a past column that becomes more timely each day) “dare to say white.” But let’s not delude ourselves. One need only view Nick Fuentes’ Telegram to understand that the anti-Kirk aktion is not about discussion but disruption. I’d have preferred to see the groypers start their own campus network instead of burning down Kirk’s. Being an agent of destruction is way too popular an occupation on the far right these days.

Now, maybe this is the “OK boomer” in me talking, but these young self-described “autists” who get such a kick out of wreaking havoc make me nervous. I’m rarely surprised by anything in politics anymore, but last year, when an obese alt-right “edgelord” named Matt Forney tried to use Antifa to smash up an event I was hosting for Ann Coulter in West L.A., I was genuinely taken aback, because the guy did it just for the laughs. He had no ideological beef with Ann or with me. He just wanted to destroy something because it was fun.

Unlike Forney, the groypers do have a philosophy. But if Fuentes’ social media demonstrates anything, it’s that destroying Kirk and all who support him has become an end, not a means to an end.

Take the way they’ve gone after Rep. Dan Crenshaw, a guy who, unlike any of the groypers, actually has the power to legislate the things we want done. What exactly was the point of trying to embarrass him with questions about Israel and 9/11? And by the way, bringing 9/11 trutherism into the immigration debate is as brilliant as bringing in Holocaust jokes. If “9/11 was a Zionist plot” (or an “inside job”), the logical conclusion is that our immigration laws had nothing to do with 9/11. If evil Zionists carried out the attacks and framed innocent Arabs, then everything Ann Coulter and Michelle Malkin have written about how Muslim terrorists used, abused, and exploited our undiscerning immigration system is therefore completely false. Trutherism robs immigration restrictionism of one of its strongest arguments, that our “America last” immigration policies allowed a bunch of foreign troglodytes to legally waltz right in and carry out one of the greatest slaughters in American history.

The core of trutherism is that the Muslims were either framed or their identities entirely fabricated by the conspirators. Either way, it means that immigration policies had nothing to do with the attacks, and those who’ve written otherwise are dupes, idiots, or liars.

This is not good strategy. Even stalwart immigration restrictionist Rep. Matt Gaetz was recently attacked by groypers for daring to suggest that TPUSA deserves to exist. So now Gaetz is the enemy? And while the groypers are obsessed with this kind of self-defeating Herostratus-level arson, leftists are thinking—and planning—generations ahead. One of the reasons the most extreme leftist strategists have been so successful is that they understand that at times the ideologically impure can nevertheless be useful. Do you recall that as leftists pushed for gay marriage, “mainstream” lefties swore that it would never lead to enforcement of tranny orthodoxy? “Oh no, we’ll never force little girls to undress in front of men in wigs!” And do you recall how, before that, leftists tolerated anti-gay-marriage sentiments from politicians like Obama and the Clintons?

Notice how leftists didn’t crash Obama Q&A’s in 2008 to make him squirm with gay marriage or tranny bathroom questions.

I get tired of always having to remind rightists about how the left has mastered the art of incremental change. They can purge those who are not ideologically pure on the tranny question now. But if they’d tried that purge in 2000 or 2008, they’d have queered their deal.

We need “safe” points of entry like TPUSA to serve kids who are, at present, more “anti-left” than “pro-right.” We need the middle-of-the-roaders in sanctuary cities who don’t care about demographics per se, but who are revulsed by catch-and-release and noncooperation with ICE. And we need people who prioritize building a wall over rehashing the USS Liberty or Googling “dancing Israelis.”

The groyper thing is going to burn out fairly soon (don’t believe me? Let’s talk again next fall). But I hope the core ideas that the groypers were supposedly pushing, mainly the discussion of why the immigration debate needs to be about more than just properly filled-out forms, and why Conservative Inc. has no real desire to tackle the issue, stick around.

A demographics-focused anti-immigration movement is a good thing, but it’s going to take more than ideological purists to dam up the left’s raging river. Put the urge to purge on the back burner for the time being. Yeah, watching Charlie “little face” Kirk squirm is funny. Yeah, humiliating a one-eyed war-hero congressman makes for good LULZ. But perhaps our focus should be on ensuring that in five years’ time, we have a little more to show for the victory of 2016 than memories of a kick-ass concert.