Twilight of the God Emperor 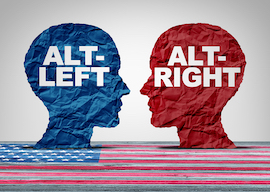 Several weeks ago I mentioned, somewhat in passing, my years working as a Tea Party activist. My intention was to point out the advantages we had back then, compared with today’s pro-Trump ground-level activists (what one might call the activist base…the people who are more than just voters but not at the level of paid, professional pundits; the boots-on-the-ground agitators and online warriors).

During the Tea Party years, we had two things going for us. The big one was that we had the full backing of the GOP machine and the big-money donors behind it. But we had another advantage…we were smart. Now, to be fair, we weren’t trying to climb the mountain that Trump grassroots activists were faced with in 2016. Our issues were old-timey GOP stalwarts: low taxes, no socialized medicine, etc. And in those years we had the benefit of being insurgents united in opposition to Obama. Acting against a common enemy makes coalition-building easier.

The Trump activist base doesn’t have it so easy. Those poor bastards have to deal with opposition not just from the left but from mainstream conservatives, the GOP machine, and big business. And “leading” this base is a president who’s surrounded himself with people who want to torpedo his agenda. How do you prevail when the entire establishment is against you, and even your own “God Emperor” seems less than enthusiastic about actually acting on his most daring promises?

You’d have to be exceptionally smart to accomplish anything significant under such conditions. And the ground-level Trump activist base is strikingly not smart. Actually, “not smart” is too weak a term. I could throw around a few others (massively incompetent, uniquely unskilled), but instead I’ll just illustrate my point with a few examples.

Notice how no one talks about the “alt-right” anymore. Wasn’t it only two years ago that everyone, friend and foe alike, was speaking of this new “force” on the right? Well, that tiger turned out to be more paper-thin than an elderly Jap’s origami sculpture.

To begin with, the Trump activists absorbed the worst aspects of their leader. Not his business savvy or his ability to look good on TV. No, they assimilated his ugly side—his love of insults and trolling, and his strategy of dealing with internecine squabbles by employing personal attacks against real or imagined foes (“Ted Cruz? Your wife’s ugly. I win”). Trolling will only get you just so far. Trump didn’t win because of his insults, he won because of his agenda.

“Trump’s 2016 activist base is syphilitic and dying.”

Next problem? Following Trump’s 2016 victory, the energized alt-right began acting like a bunch of first graders choosing sides for a softball game:

“On MY team, I don’t want no fags! And anyone who lets fags onto their team ain’t true alt-right!”

“Well, I don’t want no JEWS on MY team. Fags is fine. Some of the best nationalists I know is fags!”

“Hey—that sounds like FAG talk to me, you faggot!”

They were so busy squabbling over their draft picks, they forgot to actually play the game.

Another handicap: The Trump grassroots activist base is too top-heavy with the gullible. When you already have so many trolls, adding morons to the mix is a recipe for disaster. Rather than sticking with real-world issues, Trump activists quickly became lost in “QAnon” and Pizzagate-style hoaxes, almost all of which originated from their own side. A bunch of easily fleeceable dolts comprising one half of a movement, and a bunch of “some men just want to watch the world burn” Joker cosplayers comprising the other. The base ate itself.

Speaking of the stupid and the gullible, I’ve noticed recently that many of my most fervent “God Emperor Trump” friends have started warming up to socialism. “Ocasio-Cortez may be dumb as a brick, but she’s onto something!” “Protect Maduro from the evils of the free market!” This line of thinking has even made its way up the ladder to top-level talking heads like Tucker Carlson. Indeed, the normally nimble Carlson recently struck out while trying to cozy up to a far-left socialist who flummoxed the host to the point where Carlson used an expletive and called off the interview. Why? Because the socialist had a consistent worldview, whereas Carlson, in trying to be kinda capitalist and kinda anti-capitalist, had birthed a thalidomide baby of an ideology, a malformed mess that couldn’t live outside the womb.

The pro-Trump socialist sympathizers have arrived at their position because they’ve taken Trump’s incessant (and not wholly unwarranted) swipes against “globalists” as a call to “soak the rich!” “The globalists are the enemy! Let’s tax them into oblivion.” This myopic view of economics misses a key point, which is that it’s never about who you’re soaking, but where the fucking money is going. Stop looking at who’s losing, and start looking at who’s gaining. All the money “soaked” from the rich will go to the things the Trump base supposedly hates—foreign wars, the welfare state, and a larger and more powerful federal bureaucracy.

Hey, far-rightists…when has big government ever favored you? If your dream is to live on yer land with yer hounds and a thousand guns, why exactly do you want to feed the federal-government beast? Ask Randy Weaver how that “big government” thing worked out for him.

Moreover, you cannot be in favor of the wall and be in favor of any measure of socialism. The core belief of socialism is that every societal ill can be cured by throwing money at it. That’s the heart of socialism. Failing schools crammed with low-IQ kids who lack the attention span to learn the alphabet? Throw money at it! A permanent U.S. underclass plagued by single-parent homes, absentee fathers, welfare dependency, and neighborhoods run by street criminals? Throw money at it! Regardless of whether the problem is nature- or nurture-caused, money will solve it!

Remember—even if the wall went up tomorrow, the main driver of U.S. demographic change would still be internal (birth rates of people already here). So by all means, rightists, grow that welfare state and get more babies from folks who can’t afford to have ’em! And when you’re robbed and stabbed in an alley by one of those kids sixteen years from now, as you lay dying you can comfort yourself with the knowledge that paying for your murderer’s upbringing at least helped to “soak the rich.”

If you believe that throwing money at a failing inner-city school will turn those kids into brilliant scholars, then by logical extension you also have to believe that throwing money at every tattooed Honduran and Salvadoran gangbanger who waltzes across the border will turn them into model citizens. If you truly think that government money can overcome inborn or ingrained problems, forget the wall…give each illegal thug a big fat check!

A disjointed and contradictory worldview is always a recipe for failure.

The last factor is the one that annoys me the most: popcorn! You know those “I’m just here for the popcorn” memes that folks on social media post in a thread to show how much they’re getting off on spectating a good donnybrook? That, to me, is the epitome of what the Trump activist base, especially that ill-defined “alt-right” segment of it, has become. Unable to effect real change, shut out of the God Emperor’s palace, these bozos have taken to feuding with each other, enjoying the popcorn as they attack their own.

These creeps are like incels who go gay because any guy can get laid in a bathhouse. Unable to “score” real victories, these blue-balled losers act out in the only place that still pays attention to them: their own circle. This alt-right site attacks that alt-right site. This anonymous YouTuber goes after that anonymous YouTuber. “Ooooh, did you hear? BakedLobster is feuding with PillPopper! Where does Styxen666en stand? I’ll get the popcorn!”

This is how a movement that probably never had any real promise dies…with sparsely viewed flame videos.

Here’s the best example I can give of this pathology. Last October, I hosted Ann Coulter in L.A. for a book-signing event. I’ve written about this before, but I’m bringing it up one final time to make a point. I was tipped off a week in advance that a disgruntled incel former friend with a personal grudge was planning to sabotage the proceedings by rallying Antifa to bust up the venue and harass attendees. Old story, who cares. But what I also found out was that his accomplice in trying to get Coulter and 240 local conservatives assaulted by Antifa was an alt-rightish fellow named Matt Forney. Forney is an American expat living in Eastern Europe. I interviewed him for my column in August 2016. There’d never been any bad blood between us. We’d never even met in person. And yet here he was trying to bring Antifa down on 240 people (plus one of the most important voices the Trump agenda ever had). And why? No reason. Literally no reason. The guy just likes sowing discord for the sake of it.

Did Matt Forney ever actually stand for anything? He must’ve. Slate covered him in 2016, around the same time I did. Leftist protesters used to target him at rallies (occasionally aided by Forney’s troubled relationship with gravity). At one time, he must’ve had beliefs. He must’ve had opinions on matters of political or societal import. Not anymore. Now his entire thing is feuds with other rightists. That’s literally all he does; flame-war YouTube videos. Nothing else.

Two months after the Coulter event, and humiliated that I’d discovered his role in the failed Antifa plot, Forney tried to bait me into getting into one of his beloved public squabbles. “You’re like every other Jew: you have a big mouth and no balls,” he emailed, daring me to make a video about him, before adding, “I know where you live. Don’t push your luck” (Forney also recently threatened to dox Jim Goad).

Forney represents the tattered, pathetic detritus of the movement that used to be called the alt-right. Infighting, trolling, and flame wars are all they have left. Trump’s 2016 activist base is syphilitic and dying. For his sake, I hope white, blue-collar voters stick with him, because he’s going to get precious little help in 2020 from his online agitators. They’re too busy popping corn and pretending to be James Holmes pretending to be the Joker.

The question that interested me when I started this piece was, the Tea Party had clever activists, the support of a party machine, and the backing of the big-money establishment. So of course we were effective. But could a group of grassroots activists score victories with none of those things? No party support, no corporate money, no brains. Could the odds be defied?

Find out next week in part 3 of this series!

Just kidding. This isn’t The Walking Dead; I don’t do cliff-hangers.

The answer is no. G’night, folks!