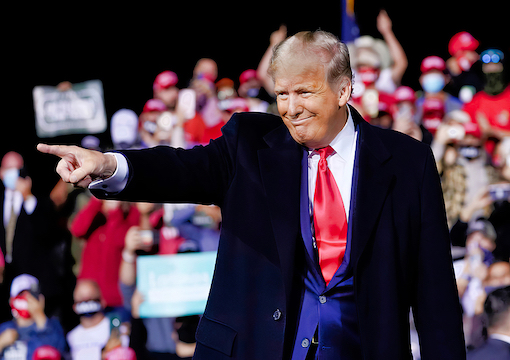 Being a Wednesday-morning columnist is a good gig, except the day after Election Day when nobody will be interested in whatever statistics I’d researched on Monday.

So, having no clue how the voting turned out yesterday, let me try to be at least vaguely relevant by finally getting around to telling you My Opinion of Trump.

It occurs to me that I’ve probably written less about Donald Trump’s personality over the past four years than just about any pundit in America.

One reason is because everybody else writes incessantly about Trump, while my niche is analyzing topics that few dare mention, such as how urban murders were up 53% over 2019 during the June–August George Floyd mourning process. (How’s that media-declared Racial Reckoning working out for big-city property values anyway?)

Another reason is that my main interest is in pattern recognition: I’m basically a baseball-stats-type guy who instead analyzes social data.

Trump, on the other hand, is sui generis. Over the 35 years since he first surfaced in the national media, Trump has been such a unique personality that I haven’t been that interested in him because he doesn’t seem terribly exemplary of any patterns or trends.

He is who he is and nobody else is quite like him. Trump is perhaps the most “To thine own self be true” personality I’ve ever seen. He has been authentically Trump-like throughout the decades.

Joe Biden, in contrast, although resembling Trump in his egomania and lack of a filter, tries to keep you from noticing as he chases trends, such as announcing in Kenosha that Thomas Edison didn’t invent the light bulb, it was some black dude whose name Joe doesn’t recall at the moment.

“It occurs to me that I’ve probably written less about Donald Trump’s personality over the past four years than just about any pundit in America.”

Moreover, Biden is not all that unusual a personality; in fact, other than being skinny, he’s a cliché cocky jock: the car dealer’s son who played split end in small college football and took a few knocks on the head, a Gerald Ford with fragile self-esteem issues. It’s not a coincidence that in Biden’s three tries for the White House, he has been most successful now that his personality is muted by age, masks, and his basement. Blair Nathan writes:

Biden is the perfect candidate for the Coalition of the Fringes because he’s been running as a generic Democrat, a compromise candidate none of the factions are excited about but all believe they can influence to some degree. So the ambiguity and lack of content of “Bidenism” are well suited to the ungainly coalition that makes up the modern Dems.

The one Trump forerunner I can recall is bombastic George Steinbrenner, who bought the New York Yankees baseball team in 1973 when both the Yankees and New York City were down and out. Like Trump a few years later, Steinbrenner bet big on New York City and won.

Trump has boasted that Steinbrenner was his mentor and best friend.

Did it work? Steinbrenner ended up winning seven World Series over his 37 years of ownership (although five came after he’d calmed down somewhat).

But to a genteel Los Angeles Dodgers fan like myself in the 1970s, Steinbrenner seemed like the most horribly New Yorkerish human being imaginable (although he was actually from Cleveland). So when Trump arrived a decade later, he struck me as the second coming of Steinbrenner. Thus, I’ve never been an enthusiast for his personality.

Also, I don’t find Trump very funny. Granted, the metajoke—the Trump Presidency as the most audacious spin-off in the history of the extended universe of World Wrestling Entertainment—is hilarious. In contrast, I find Biden unintentionally zany. But that’s just me. Your mileage may vary.

To Trump, Steinbrenner was a role model.

Trump’s basic theory was, more or less, that you can make a lot of money even if 57 percent of the world dislike you if 43 percent like you, so long as 100 percent know your name. (Whether that strategy can win you two terms as president is something you’ll have a better idea of than I do at the moment.)

Of course, most people can’t put up with being hated by 57 percent. It takes remarkable psychological resiliency to shrug off the level of demented rage directed endlessly at the president.

Anti-Trump forces project their own darkest urges onto Trump, calling him an authoritarian destroying democracy and free speech.

C’mon…imagine if Trump locked up all his critics: He’d get bored, start to miss them, and would let them all out in 36 hours to tangle with him on Twitter again. Trump, unlike many of his haters, likes arguing.

And, if predictions of record turnout for this election pan out, it ought to be obvious that Trump has been better for democratic engagement than just about anybody since about 1896 or 1840.

Trump could have used the pandemic as an excuse to grab more power, but instead he gets slammed for not doing that, for his federalist approach.

As for his presidency, it’s hard to start a new career at age 70, but the country enjoyed three years of peace and prosperity under Trump. It was always likely that at some point his luck would change for the worse, but by last winter it was starting to look like it would be in his second term.

Then the coronavirus arrived. Trump’s strong suit is that he radiates an attitude of “Don’t bullshit a bullshitter.” But the innate optimism that you need to be a real estate developer to convince all the parties that your skyscraper really is going to happen played poorly at a time when people wanted to hear how bad things were going to be, but that The Science had a Plan. Thus, many thought New York governor Andrew Cuomo’s briefings were wonderful, even though, in reality, he was killing off hundreds of nursing-home residents through his poor decision-making.

Trump, in contrast, seemed to be making it up as he went along. Which, of course, he, like everybody else, was doing. Indeed, what else can you or should you do with a novel and murky problem?

Then Trump missed the chance to show how the shortage of N95 face masks demonstrated the wisdom of his protectionist strategy on trade.

Trump wasn’t elected to take on new problems, but old ones where the conventional wisdom had gone off the tracks.

Still, as Hamlet said of his father:

He was a man, take him for all in all,
I shall not look upon his like again.