The Ultimate JQ: Religion or Race? 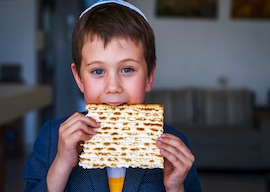 In case you were unfamiliar with the term “The JQ,” it is shorthand for “The Jewish Question,” which has been asked in different forms since at least the mid-1700s but probably ever since the Jewish diaspora started and they found themselves aliens in foreign and often hostile populations. It’s a hopeless oversimplification, because there are all manner of questions one can ask about Jews or anyone else. The JQ often takes the form of crudities such as “What do we do about them?” or “How do we get rid of them?,” but to me the most fundamental JQ is “What exactly makes someone Jewish?”

It would surprise and likely shock most people to learn that
Adolf Hitler and the Chief Rabbinate of Israel agree on a major point regarding this iteration of the Jewish Question—that Jewishness has a genetic basis and is not merely a religious or cultural preference.

Before you choke on your buttered bialy, I realize that many have been persuaded (or frightened…or brainwashed) into believing that World War II settled the “genetic question” once and for all and proved for perpetuity that “race” is nothing more than a social construct.

I would invite them to explain how being the more efficient killer with the most destructive weapons settles any ideological question. Stripped of all emotion and pretense, it appears that the only question that war ever settles is which side was best at the dual arts of death and destruction.

“One can’t measure religion or culture—at least not like they can measure DNA.”

But if you insist that Jewishness is defined by an adherence to Judaism, kindly explain why Jews are the least religious group worldwide and why only a quarter of American Jews with college degrees say they believe in God.

If you wish to step away from a strictly religious explanation of what it means to be Jewish and say it’s “cultural,” you are free to explain exactly what “culture” is beyond a specific genetic group’s collective responses to their environment over a given time period. And if you think that race is a fiction and culture is nothing more than a superficial fashion choice, do you honestly think that placing a Somalian in a kilt and feeding him haggis makes him Scottish? Was “culture” magically able to turn Rachel Dolezal black?

One can’t measure religion or culture—at least not like they can measure DNA. If you believe that being Jewish is simply a matter of religion, I’d be curious to hear if you also believe that Tay-Sachs Disease and Gaucher Disease simply hang around synagogues waiting to strike their victims.

Those aforementioned ailments specifically affect Ashkenazi Jews, who are genetically distinct from Sephardic Jews, whose genes bear traits from Spain’s Iberian Peninsula, and Mizrahi Jews, whose DNA originates in the Middle East. But as recently as the early 1930s, an estimated 92% of worldwide Jewry were Ashkenazim, and even modern estimates place their quotient at around 75% of the global total. The Ashkenazim are the dominant Jewish group in Israel, and I will pause to reflect on the fact that the planet’s major cluster of Jews contains the text string “nazi” in their name.

In the perennially misrepresented passage about the “Big Lie” in Mein Kampf, Hitler specified that the lie in question was that Jews were merely members of a religion rather than a genetic tribe:

Is not their very existence founded on one great lie, namely, that they are a religious community, whereas in reality they are a race?

Why would this be so important to Hitler—and so important to deny for so many others? Could it be the sneaking suspicion that blood runs deeper than religion and ideology and that ethnic competition is at the very root of all political struggles?

In 2015, it was reported that the Israeli State was demanding that many self-proclaimed Jews from the former Soviet Union were being “asked to provide DNA confirmation of their Jewish heritage in order to immigrate as Jews and become citizens under Israel’s Law of Return.”

The original version of Israel’s Law of Return, enacted in 1950, essentially defined a Jew as anyone who claimed to be Jewish. It was amended in 1970 to include the phrase “a person who was born of a Jewish mother.”

But since there is no such thing as civil marriage in modern Israel between two partners of differing religious faiths, it is up to the rabbis to determine precisely who is Jewish and who isn’t. And increasingly, they are relying on DNA tests to make the call.

In an apparently well-meaning but hopelessly confused essay for The Guardian titled “What does it mean to be genetically Jewish?,” a certain Oscar Schwartz writes:

DNA tests have been used in Israel to verify a person’s Jewishness. This brings a bigger question: what does it mean to be genetically Jewish? And can you prove religious identity scientifically?

When my parents sent their saliva away to a genetic testing company late last year and were informed via email a few weeks later that they are both “100% Ashkenazi Jewish”, it struck me as slightly odd.

I am hardly a geneticist, but I will attempt to answer Oscar’s questions: Being “genetically Jewish” means that a DNA test found markers that links you ancestrally to Ashkenazim, Sephardim, or Mizrahim. And no, you cannot prove religious identity scientifically, because unlike race, religiosity is merely a social construct.

Israel is the historic homeland of the Jewish people and they have an exclusive right to national self-determination in it.

He also quotes an Israeli historian named Shlomo Sand, who is working himself up into a shvitz worrying that the mere idea that race is real—an idea which was universal until about, oh, 1945—will lead to another Shoah:

Israeli society is becoming more of a closed, ethno-centric society. I am worried that people will start to use this genetic testing to build this political national identity….I am the descendant of Holocaust survivors, people who suffered because of biological and essentialist attitudes to human groups. When I hear stories of people using DNA to prove that you are a Jew, or French, or Greek, or Finnish, I feel like the Nazis lost the war, but they won the victory of an ideology of essentialist identity through the blood.

Although it may be impudent for me to dare correct an Israeli historian, I believe that although ideas may be window dressing for wars, such bloody conflicts are always about land and power and resources…and blood.

As heretical as the notion seems, merely believing that race is rooted in biology doesn’t automatically lead to 70-85 million deaths. I’ve believed that race is real for over a quarter century and never wanted to kill anyone over it, and I’m known for having a bit of a temper. As always, it’s people who can’t handle mere opposing ideas who see fit to blindly lead the world headlong into bloodshed.