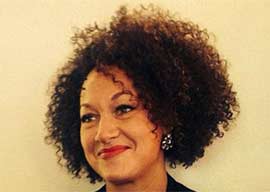 Sipping my iced coffee outside a cafÃ© last Thursday night in Decatur, GA”a town with such a thriving lesbian ghetto that local wiseacres call it Dick Hater, GA”the stars magically aligned and I found myself seated next to a table of three fat white women huddled worshipfully around one fat black woman.

The fat white women all stared with adoration at the fat black woman. It seemed as if merely by being black, she was their guru. They laughed at everything she said”loudly. Clearly they enjoyed her salty, authentic vocal inflections and her sassy, mama-don”t-take-no-mess attitude. When they weren”t laughing at her jokes, they spoke somberly of justice and inclusivity and passion. I swear on a stack of Torahs that they also stressed the need for people to properly distinguish between inclusivity and passion, although I doubt that even they had a clue what the fuck they were talking about with that one.

But what rang clear as a copper bell on a crisp Alpine morning was that these three fat white presumed lesbians worshiped the fat black presumed lesbian merely because she was black and thus wasn”t saddled with the historical guilt that emotionally cripples fat white lesbian women in the throes of a midlife racial identity crisis.

If they were only able to crawl inside this black woman’s skin, they would do it. In fact, I suspect that’s exactly what they did later that night.

“The term “wigger” is a portmanteau of “white” and a word beginning in “n” that is so horrible, I just literally shrieked out loud at the mere thought of typing it.”

As our society is currently constructed”or, rather, as our culture is currently dictated to us”there is no emotional satisfaction in being white. There is only pain and guilt and apologies. And this is why so many whites seek refuge in pretending to be black. They talk black, think black, and even try to look black. Some even claim that they are black.

Earlier that day before I encountered the interracial fat lesbian social-justice quartet at the Dick Hater coffee shop, Taki’s Mag writer (and accused Judeophile) Kathy Shaidle informed me of the odd case of one Rachel Dolezal, the NAACP Branch President of Spokane, WA who for years has successfully “passed” as a black woman but was recently outed as a natural-born blue-eyed devil.

In a video that went viral last week, a reporter corners Dolezal about her claims that her dad was black. Behind blue eyes, Dolezal affirms that yes, indeed, sure, yup, her dad was black, yes, yeah, mm-hmm, he was. But when the reporter presses the subject, she walks away.

For years Dolezal has claimed her dad was coal-black and that she’s given birth to black sons. But last week her white parents revealed that she’s almost entirely of European descent, with the only other tincture being perhaps a gentle sprinkling of “Native American.” Also last week, one of her alleged “sons” revealed that he was merely her black stepbrother and that she often urged him to lie to others that she was black. It seemed as if her parents and her black step-bro all wished for the nutty charade to end.

In addition to birthing Rachel, her parents also adopted four black children. Like their natural-born daughter, they apparently loved basking in the whole black experience, too. But despite their wide-eyed progressive earnestness”or perhaps as collateral damage from it”they say their daughter started acting increasingly hostile toward them around 2006 or 2007. As luck would have it, this was also when Rachel began her attempt to visually “transition” into blackness. She already felt she was there internally”she merely needed a new coat of paint to finish the renovation job.

Miz Rachel is either baking her naturally melanin-deficient skin orange at a tanning salon or applying bronze-colored makeup in an act of theatrical deception that is only different from full-blown minstrel-show blackface in terms of hue.

The term “wigger” is a portmanteau of “white” and a word beginning in “n” that is so horrible, I just literally shrieked out loud at the mere thought of typing it.

But Rachel Dolezal”who was born with blonde hair, blue eyes, and pale white skin“appears to also be a literal wigger, assuming that is indeed a kinky-haired black-woman’s wig she was wearing in that video. If not, she must pay her stylist bookoo bucks to blackify her God-given Nordic mane. In this video“where she bemoans the proliferation of wealthy white males on US currency”she’s rockin” some blond cornrows that I strongly suspect are hair extensions.