The United States of Abstractions 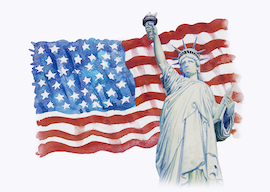 America was founded by British Protestant men. The Constitution, as we read in its Preamble, was meant to “secure the Blessings of Liberty to ourselves and our Posterity.” And yet, today ethnic traditionalism—a concept that includes religion—is off the table as a political good for white Americans. Indeed, anyone who, like Rep. Steve King, even dares to ask, in short, “What’s so bad about white traditions?” is sure to be condemned as a racist, and as happened to King, punishment may swiftly follow.

Any nationalism that wants to be acceptable in polite company—including Congress—must now be founded on certain Enlightenment abstractions: equality, liberty, and the like lofty notions. For the state itself exists, according to the enthusiastic believers, to realize these goods.

There are, however, a number of problems with this conception of the state. To begin with, most people really aren’t all that serious about America the propositional nation. Of course, they’re happy to sing the praises of equality and liberty, as they are of free markets and limited government, but in practice, such language mainly functions as a means for realizing individual interests and group interests, not any national good.

Our affections being, for the most part, local and rather limited in their applications, we find that talk about supposedly universal abstract goods is usually meaningless outside of its rhetorical (and often merely manipulative) purpose. Man, moreover, is essentially irrational; therefore, as motivating forces, and as justifications for the state itself, equality, liberty, and the rest pale in comparison with religion and the notion of “our people.”

To be sure, traditional blood-and-soil nationalism is hardly an unmixed good. It can make, and has made, for some immoral and crude attitudes and behaviors. Yet it’s strange that, while many people recognize the problems associated with such ethnic traditionalism, few of us seem to have a proper skepticism regarding the abstractions that, we’re to believe, are now the purpose of and justification for the state itself. Few people seem to know, or at least take seriously, the truth that the Enlightenment values which so many cherish, or appear to cherish, are themselves the fruits of organic, local, context-specific traditions.

“Most people really aren’t all that serious about America the propositional nation.”

One notable exception is the Israeli philosopher Yoram Hazony. “The Dark Side of the Enlightenment,” Hazony’s April 6, 2018, article in The Wall Street Journal, is a wise corrective for our naive rationalists, so I will quote it at length:

Consider the claim that the U.S. Constitution was a product of Enlightenment thought, derived by throwing out the political traditions of the past and applying unfettered human reason. Disproving this idea requires only reading earlier writers on the English constitution. The widely circulated 15th-century treatise “In Praise of the Laws of England,” written by the jurist John Fortescue, clearly explains due process and the theory now called “checks and balances.” The English constitution, Fortescue wrote, establishes personal liberty and economic prosperity by shielding the individual and his property from the government. The protections that appear in the U.S. Bill of Rights were mostly set down in the 1600s by those drafting England’s constitutional documents—men such as John Selden, Edward Hyde and Matthew Hale.

These statesmen and philosophers articulated the principles of modern Anglo-American constitutionalism centuries before the U.S. was created. Yet they were not Enlightenment men. They were religious, English nationalists and political conservatives. They were familiar with the claim that unfettered reason should remake society, but they rejected it in favor of developing a traditional constitution that had proved itself. When Washington, Jay, Hamilton and Madison initiated a national government for the U.S., they primarily turned to this conservative tradition, adapting it to local conditions.

Nor is there much truth in the assertion that we owe modern science and medicine to Enlightenment thought. A more serious claim of origin can be made by the Renaissance, the period between the 15th and 17th centuries, particularly in Italy, Holland and England. Tradition-bound English kings, for example, sponsored pathbreaking scientific institutions such as the Royal College of Physicians, founded in 1518. One of its members, William Harvey, discovered the circulation of the blood in the early 17th century. The Royal Society of London for Improving Natural Knowledge, founded in 1660, was led by such men as Robert Boyle and Isaac Newton, decisive figures in physics and chemistry. Again, these were politically and religiously conservative figures. They knew the arguments, later associated with the Enlightenment, for overthrowing political, moral and religious tradition, but mostly they rejected them.

In short, the principal advances that today’s Enlightenment enthusiasts want to claim were “set in motion” much earlier. And it isn’t at all clear how helpful the Enlightenment was once it arrived.

Needless to say, the figures Hazony references weren’t beset by our decadent, self-destructive aversion to the national interest and our own heritage. They took such values for granted, and working within their traditions, they were able to accomplish the marvelous things that they did. The fertility rate in Hazony’s Israel is 3.1 births per woman. Here in the U.S. it’s 1.7 births per woman. That figure, like those found throughout Europe (Iceland alone excepted), is below population replacement level, a reality that presents many long-term economic challenges. Meanwhile, if current trends continue, fiercely nationalistic China will surpass the U.S. as the world’s dominant power in the near future.

In view of all this, it seems clear that the propositional nation isn’t as valuable as the neocons, the Jaffaites, and other ardent levelers would have us believe. It’s often said, for example, that open borders are necessary to maintain population growth. But this assumes that immigrants, on the whole, are adequate for a 21st-century cognitive economy, even though the vast majority lack the requisite skill set. Open-borders advocates also overlook issues of cultural compatibility and the need to put America’s own working class first. Indeed, the trouble with the propositional nation is that it raises the question of why there should be a nation at all: If the lofty abstractions are what America is for, and how it justifies itself, then why should only “our people” enjoy them? Is such exclusivity not, at bottom, a blood-and-soil thing? Yes, it is.

Many people today seem to think that government works rather like computer programming: Simply implement the right policies, and people can thrive anywhere. But men and women are not software, and besides, this Enlightenment dream ignores the actual character of the Enlightenment itself. Finally, we should know by now that such blind rationalism easily lends itself to foolish and destructive endeavors, such as democratic nation building in the Middle East.

Do the limitations of the propositional nation mean we should embrace ethnic traditionalism? I must confess my perplexity here, which I think many people in our uncertain time will share. I’m an atheist who doesn’t identify with white people (or any other group) in a deep sense. Still, I remain a reactionary for several reasons, one of them being my opposition to the technocratic, homogenizing world order that men like Steven Pinker call for with great fervor. Writing in Quillette, Pinker happily notes that “The demographic sectors that are the hottest hotbeds of populism are all in decline: rural, less educated, older, and ethnic majorities.” Nevertheless, such deplorables have given Pinker and his ilk a lot of pains:

For believers in Enlightenment and progress, the second year of Donald Trump’s presidency felt like being strapped to a table and getting a series of unpredictable electric shocks. They include his kissing up to autocratic thugs, undermining a free press and judiciary, demonizing foreigners, gutting environmental protections, blowing off climate science, renouncing international cooperation, and threatening to renew a nuclear arms race.

Of course, however, the confidence man is never without good news. “But before we imagine the future as a boot stamping on a human face forever,” he continues (alluding to George Orwell’s 1984),

we need to put authoritarian populism in perspective. Despite its recent swelling, populism appears to have plateaued. A majority of Americans consistently disapprove of Trump, and in Europe, nationalist parties won a median of just 13 percent of votes in 2018 elections…. The travails of Trump and Brexit in 2018 are a reminder to supporters that populism works better in theory than in practice. Lined up against it are democratic checks and balances within a country and pressures toward global cooperation outside it, the only effective means to deal with trade, migration, pollution, pandemics, cybercrime, terrorism, piracy, rogue states, and war.

And though Trump and other reactionary leaders can do real damage, and will have to be opposed and contained for some time to come, they are not the only actors in the world. The forces of modernity, including connectivity, mobility, science, and the ideals of human rights and human welfare, are distributed among a wide array of governments and private-sector and civil-society organizations, and they have gained too much momentum to be shifted into reverse overnight.

While they contain some truth, on the whole, these passages are quite glib and cheap, complex issues being simplified into progressive boilerplate. I don’t have the space for analysis, however, so let me simply observe here that this sort of thinking is just what should be expected from the rather neocon-like Quillette crowd. Indeed, Quillette recently had a party in Toronto, where David Frum and Ben Shapiro themselves were in attendance. Like those two warmongering hysterics, and like Pinker himself, it is the function of the Quillette crowd, in politics, to lend a naive rationalist faith to the technocratic globalist agenda. National sovereignty, and the desire of ordinary people to govern themselves, are to be subordinated to the calculations of large expert organizations, many of them transnational. And all this while Europe is gradually dying off, with America perhaps not far behind.

Like the neocons, the Quillette crowd says all the right things about equality, universal human rights, humanism, and the like moral clichés, for as intellectuals know very well, there is ever a good living in such pretense. The Quillette crowd is led by the magazine’s founding editor, Claire Lehmann. Although she is celebrated as a steward of “free thought,” precisely the opposite is true; as I explain in my essay “The Intellectual Dark Web’s Unwise Center,” Lehmann is a fraud. In this respect, she is of course akin to neocons like Frum and Shapiro. The two groups are ideological bedfellows, and the independent right should regard the Quillette crowd with the same suspicion and distrust as it does the neocons.