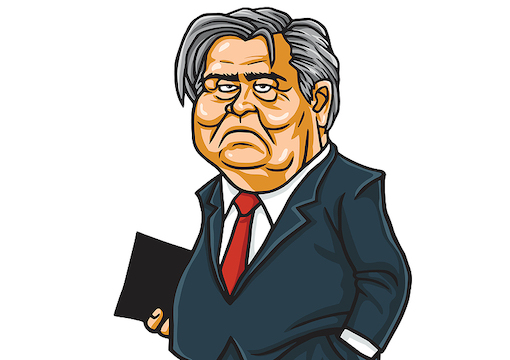 The Week’s Most Incessant, Tumescent, and Adolescent Headlines

Last Thursday morning aboard the yacht of exiled Chinese political dissident Guo Wengui, federal agents arrested Bannon on one count of conspiracy to commit wire fraud and one count of conspiracy to commit money laundering. The official indictment charges Bannon along with three other men—one of whom is missing three limbs—with diverting funds from an alleged nonprofit called We Build The Wall and lining their own pockets with money they’d promised would go “100%” toward helping fund a wall along the Mexican border using private funds exclusively on private property.

Bannon and the nine limbs that comprise the three other defendants allegedly siphoned off $100,000 right off the top and gave it to one-limbed war vet Brian Kolfage and subsequently supplied the alleged “volunteer” with a rather tasty $20K-per-month stipend. The indictment also charges Bannon with using untold tens of thousands of dollars to cover his own expensive tastes:

As alleged, the defendants defrauded hundreds of thousands of donors, capitalizing on their interest in funding a border wall to raise millions of dollars, under the false pretense that all of that money would be spent on construction. While repeatedly assuring donors that Brian Kolfage, the founder and public face of We Build the Wall, would not be paid a cent, the defendants secretly schemed to pass hundreds of thousands of dollars to Kolfage, which he used to fund his lavish lifestyle.

When asked for his opinion, Donald Trump passive-aggressively acknowledged that Bannon had found himself in a “very sad” situation:

I know nothing about the project other than I didn’t like when I read about it. I didn’t like it. I said this is for government, this isn’t for private people, and it sounded to me like showboating and I think I let my opinion be very strongly stated at the time: I didn’t like it, it was showboating and maybe looking for funds, but you’ll have to see what happens. I think it’s a very sad thing for Mr. Bannon.

Interestingly enough, Apple News notes that Bannon used to be employed by Breitbart, which it describes as “a right-wing news site that traffics in incendiary headlines, many of them outwardly racist, misogynist, anti-Semitic.” Sorry, but we’ve been familiar with Breitbart for years, and it is not remotely as exciting as Apple News tries to make it seem.

Bannon denies all charges and claims it’s all political grandstanding by people who really don’t want to see a border wall built—which at this point seems to include the entire US government, including Donald Trump.

JEWISH REPUBLICAN WOMAN TO SQUARE OFF AGAINST JEWISH DEMOCRATIC WOMAN IN FLORIDA ELECTION
Laura Loomer is a Jewish woman who, despite her loud proclamations of being a proud Zionist, got a nose job and shared pictures with the world as if to publicly state that there is something intrinsically wrong with Jewish noses. Personally, we don’t see anything wrong with Jewish noses, but then again, that’s because we’re not anti-Semites.

Loomer, an outspoken Jewish supremacist has openly wished for more refugees to drown in their attempts to cross the Mediterranean into Europe. She also appears to have fabricated a hate crime against her car’s tire.

After being deplatformed from nearly every social-media outlet and a few financial outlets, Loomer has declared herself to be “The World’s Most Censored Woman” and does things such as going on Alex Jones to scream hysterically about her persecution.

Loomer lives in Florida’s 21st Congressional District, which is also Donald Trump’s home turf ever since he established his official residence at Mar-a-Lago. And despite being ejected by nearly every tech giant in existence, she was able to scrape up over $1 million dollars in campaign contributions in a congressional run—far more than any other GOP competitor.

Last week, Loomer won the Republican primary and will face off in November against Democrat Lois Frankel, who has held the seat since 2013. The two will battle for the soul of Palm Beach, assuming such a thing exists.

PEACEFUL PORTLAND PROTESTERS PEACEFULLY SET BUILDING ABLAZE
Ever since late May, peaceful protesters in Portland have been peacefully smashing, looting, robbing, and burning things in a desperate attempt to make their once-quaint mountain town resemble Mogadishu.

Last Tuesday night, they peacefully smashed a downtown government building’s windows, gently sprayed lighter fluid inside, and in the spirit of universal brotherhood set the building ablaze. For months now, they have peacefully smashed into the police union’s offices and have peacefully beaten people unconscious on the mere suspicion of Unforgivable Whiteness. They’ve also peacefully clashed with federal agents for weeks and have peaceably knocked gay white men unconscious while saying, “Black lives matter, faggot!”

“The US is headed for a Financial Dark Age that will make the Great Depression look like a trip to the ice-cream shop.”

So it should come as no surprise that last Tuesday night, a crowd of about 200 peaceful protesters started dumpster fires, tossed rocks through windows, and tossed incendiary devices inside a government building.

GEORGE W. BUSH STABS TRUMP WITH HIS PAINTBRUSH
George W. Bush is widely revered for being one of the dumbest, most inept, charmless warmongers ever to hold the presidency, and the only reason he was elected is because Americans are largely morons who go to see movie sequels for the same reason—because they’re already familiar with the title. He essentially bankrupted the United States chasing down a lie of WMDs in the Middle East and really got the whole Debt Ball rolling out of control at the beginning of this millennium.

But because Donald Trump was mean to his boring brother Jeb, Mr. Bush and his wife left their ballots blank in 2016 rather than vote for Trump. And now, in an apparent rebuke to Trump—what the Brits refer to as a “cock a snook”—Bush has released a picture book featuring 43 paintings of migrants to America because everyone knows diversity makes us united rather than divided, which the word “diversity” would sort of imply if you were even remotely interested in paying attention.

The book is called Out of Many, One and is described by its publisher thusly:

Through powerful four-colour portraits — personally painted by the president himself — and their accompanying stories, Out of Many, One reminds us of the countless ways in which America has been strengthened by the individuals who have come here in search of a better life.

The portraits sort of look as if a retarded teenager painted them.

In the book’s introduction, Bush writes:

While I recognise that immigration can be an emotional issue, I reject the premise that it is a partisan issue. It is perhaps the most American of issues, and it should be one that unites us. My hope is that this book will help focus our collective attention on the positive impacts that immigrants are making on our country.

Does this include the “immigrants” who flew into the Twin Towers on Bush’s watch?

BAKING COOKIES WHILE NEW YORK BURNS
New York Mayor Bill de Blasio is well over six feet tall and has a net worth of at least $2 million, so it’s a bit of a mystery why he chose to marry a black woman with the face of a cockroach. Maybe he’s simply some kind of sexual weirdo.

But despite the fact that he has almost singlehandedly destroyed the Big Apple by defunding the police to the tune of $1 billion semolians and allowing smelly trash and even smellier homeless people to pile up around town like war casualties, he still finds it in his heart to carve out an estimated $2 million annually to keep his cockroach-faced wife happy, occupied, and baking ginger-snap cookies.

Lady Cockroach—AKA Chirlane McCray—is allowed a personal staff of 14 people whose salaries cost the taxpayers roughly $2 million per annum. One staffer is a videographer who snags $70,000 yearly simply to snap photos of the Big Apple’s First Lady baking cookies. Another is a “senior adviser” who takes home $150K yearly simply to, um, offer advice of a senior nature.

Meanwhile, trash is piling up, people are being kicked into unconsciousness on the streets, the wealthy are fleeing the city for more tax-friendly havens, and the Big Apple is turning into a ghost town.

If Chirlane McCray really wanted to put $2 million in taxpayer money to good use, she’d do the right thing and hire a plastic surgeon. Hers is the face of doom, and it’s time for a makeover.

MAKING AMERICA’S DEBT GREATER THAN EVER
Although Donald Trump campaigned on a promise to eliminate the deficit within eight years, it has ballooned out of control under his command.

The most recent Monthly Treasury Statement says that for the first ten months of fiscal 2020 (which for some dumb reason started in October 2019), the Federal spending hit $5.6 trillion dollars—which already outpaces the previous record of $4.5 trillion set in 2019. At the current pace, 2020’s budget will be 150% higher than any previous budget in US history.

What’s worse, tax revenue accounted for only about half of that $5.6 trillion, meaning the US is headed for a Financial Dark Age that will make the Great Depression look like a trip to the ice-cream shop.

But sure–pretend that “racism” is America’s biggest problem.