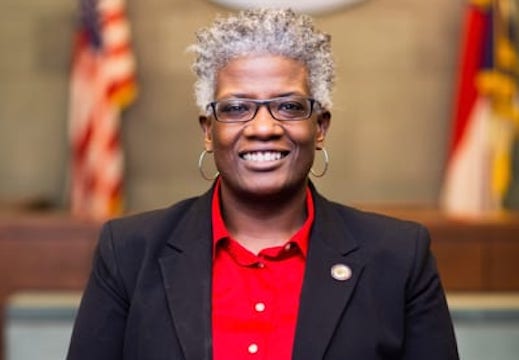 The Week’s Most Cloying, Annoying, and Soul-Destroying Headlines

BEELZEBUB HONORS RBG
If you were a fiction writer trying to come up with a name for a diabolically evil female character, you couldn’t do better than “Satana Deberry.” Indeed, such a name might be attacked by critics as too “on the nose.” I mean, why not just go with Lucyfer Gravedig? But sadly for us all, Satana Deberry isn’t fictional. She’s the real-life newly elected “progressive” Soros-backed DA of Durham, N.C.

And she’s a demon on a mission…to release as many convicted murderers as (in)humanly possible.

Recently, the Princess of Darkness participated in a memorial service for the Cadaverous RBG at Duke Law School’s newly rechristened Wilson Center for Science and Justice (disclaimer: The center deals with neither science nor justice). Opened in 2019, last week the mecca to freeing the guilty was renamed after the family that funded it (the same Wilsons who gave the world the perennially bankrupt Euro Disney). Although the rechristening was planned months in advance, organizers quickly rebranded the ceremony as a memorial to the recently skeletized justice.

Satana spoke at length about how the Wilson Center will prove invaluable to her mission, which she described as running the DA’s office “with truth, fairness, and equity” (ironically, she didn’t mention science and justice). Satana’s Mephistophelian work of late has included securing the release of Gregory Lee, a gentleman of color sentenced to life in 2006 for murdering his 89-year-old white neighbor Lois Cannady during the attempted theft of her Ford Crown Victoria. Satana decided that the time Lee’s already spent in prison is good enough, so she let him go (“life” just don’t mean what it used to).

When Cannady’s family dared to complain, Satana told them that Lee would still have to “live with the responsibility he bears for her death,” and that’s punishment enough.

So in Durham the penalty for cold-blooded murder has been reduced to “sitting in a corner and thinking about what you’ve done.” Hopefully, Lee will dedicate his next old-lady murder to RBG.

LATIN AMERICA ABANDONS KETO
Today’s young leftists are never more retro than when they speak of the poor. Privileged poverty cosplayers like Alexandria Ocasio-Cortez are obsessed with fictional images of impoverished people “stealing bread” to feed their families. In the minds of these liberal-arts-educated cretins, it’s still the 19th century. The rich are “hoarders”—cattle barons and gold misers who maintain their wealth by sitting on stolen resources—while the poor survive on gruel and stale bread…inner-city Jean Valjeans in designer sneakers, too busy brawling in fast-food establishments to avail themselves of the $2 menu.

Back in the 1980s, Jackson Browne took time out from snorting coke to record a song in which he lamented a world in which People die for the little things/A little corn, a little beans (he obviously never sobered up long enough to realize that doesn’t rhyme). That’s how the left views poverty in the modern world: simple folks struggling for bread, corn, and beans. And that’s apparently Latin America’s current state of affairs, thanks to COVID clampdowns. As reported by Bloomberg:

The pandemic has exposed just how fragile economic status is worldwide. In many ways, nowhere has that been more apparent than in Latin America, where a resurgence of poverty is bringing a vicious wave of hunger in a region that was supposed to have mostly eradicated that kind of malnutrition decades ago.

The United Nations’ World Food Programme estimates a heavy death toll from the pandemic famine, which, Bloomberg is quick to point out, has nothing to do with the region’s ability to produce food. Rather, the primary cause is the economic devastation brought about not by COVID deaths, but by shutdowns…exactly what the American left wanted more of here! In fact, in early August, when Michael Osterholm of the University of Minnesota and Neel Kashkari of the Federal Reserve Bank of Minneapolis were doing the talk-show rounds arguing for an inflexible, merciless six-week nationwide shutdown, they lamented that Trump had not been strict enough in shuttering the food production economy.

What a shame that Trump was so concerned with preventing famine. Had he listened to “the experts,” you could be dining tonight on tortilla with salt, instead of a boring, stupid old steak.

Back in the 1980s, Nicaragua was one of those irrelevant shithole countries that the U.S. and USSR turned into the unlikely center of the universe, like two Goliaths playing hacky sack with a doggy poo bag as if the fate of the world depended on the outcome. Now that Nicaragua has rightfully regained its status as a place nobody cares about, longtime Marxist strongman Daniel Ortega, looking these days like a cross between Edward James Olmos and an overripe sapodilla, has decided to crack down on the “fake news” that threatens his authoritarian rule.

And wouldn’t you know it? American leftists are thrilled!

“So, in five to seven years, people will be deepfaking clips of cats pushing things off shelves and dogs farting themselves awake?”

Ortega has advanced a bill that “would make spreading fake news on social media punishable by up to four years in prison,” a penalty meted out to anyone accused of “the publication or dissemination of false or distorted information likely to spread anxiety, anguish or fear.”

About time, said Ben Norton of Max Blumenthal’s The Grayzone: “Right wing saboteurs,” Norton fumed, have been “spreading mountains of fake news, printing demonstrably false information in hopes of stirring up a frenzy among the population.” The U.S. government and the “international corporate media” have “weaponized” fake news to topple poor little Ortega, whose only crime has been genociding some Injuns, murdering anti-government protesters, and covering up his nation’s COVID deaths by silencing and imprisoning medical professionals.

So thank God someone’s finally going to put a stop to all that fake news.

University of Westminster Senior Lecturer in Media and Communications Doug Specht agrees that Nicaraguan fake news must be dealt with, and swiftly, writing, “In a place like Nicaragua, where a highly complex and political situation is underpinned by layers upon layers of history, colonialism, imperialism and solidarity,” the “skepticism” created in the public mind by “fake news” means there will “be no justice.”

Specht claims that the fake-news threat is compounded by “Trumpian rhetoric railing against fake news.”

And if that makes sense to you, here’s a link to apply for a job at The Grayzone.

VITAL REPORTING ON THE DETRIMENTAL EFFECTS OF VITAL REPORTING
CNN contributor Nina Schick was on the road last week promoting her new book Deepfakes: The Coming Infocalypse. And the book is indeed apocalyptic. Schick predicts that “deepfake technology” will essentially corrupt reality as we think we know it. In Schick’s deepfake future, discerning what’s real from what’s fake will be downright impossible:

We are increasingly facing a future where media and content production is going to be made by AI. Some experts who I interviewed for my book said that within five to seven years’ time 90% of video content online is going to be synthetic.

Ninety percent of online videos? Really? So, in five to seven years, people will be deepfaking clips of cats pushing things off shelves and dogs farting themselves awake?

Schick is unshakable in her belief that deepfakes will soon be taking over: “We are increasingly facing a future where media and content production is going to be made by AI.”

The fear of deepfakes “risks invalidating all documented evidence of wrongdoing. In a world where anything can be faked, everything can also be dismissed as fake,” Schick wrote in the Daily Beast:

So basically, the person making the rather dubious claim that within five to seven years all online media will be deepfakes is pointing out that paranoia about all online media being deepfakes will have “calamitous consequences.”

GAUCHO MARX IN “A DAY AT THE RACISMS”
Saddleback Community College in Mission Viejo, Calif., is short on bragging rights. A minor school in a minor city, the college’s only notable graduates are 1984 Playboy Playmate of the Year Barbara Edwards and Kevin Fagan, creator of Drabble. That’s the comic strip drawn by the guy who can’t draw. Needless to say, at a school like Saddleback, morale is hard to come by. All the more reason that generations of Saddleback students have looked to the school’s mascot for inspiration: the Gaucho, an Argentinean horse-ridin’ cowboy caricature that effortlessly conveys the message “Your poor grades and impoverished parents have landed you here, loser.”

In 2018, Saddleback administrators decided to phase out the mascot, because apparently a horseback Argentinean is racist for some reason. But last week, school president Elliot Stern informed his staff that, due to pressure from students and community members who want the mascot to remain, the school was going to have to hold public talks on the matter.

Leave it to fascist students and community members to subvert democracy by preventing the president’s unilateral action.

Now that the anti-Gaucho forces have been strong-armed into, you know, making a case, they’ve created the “Retire the Gaucho” website to explain why the mascot must go.

The site, administered by unnamed faculty members and sporting a banner headline by everyone’s favorite race-baiting grant machine Ibram X. Kendi, lists the “Five Reasons Why the Gaucho Mascot Should Be Retired.”

And they’re not at all insane or contradictory.

Reason #1: The Gaucho is a racial stereotype of brown people.
Reason #2: The stereotype may be positive, but that makes it worse, because positive stereotypes of nonwhites hurt more than negative ones.
Reason #3: Argentinean gauchos don’t like being drawn as caricatures. We know this because they told us (just take our word for that, okay?).
Reason #4: Gauchos are white, so having a white mascot is discrimination against brown people.
Reason #5: The Gaucho is a man, and having a male mascot “reinforces the idea that other genders are inherently inferior.”

Remember, this site is run by Saddleback faculty, including teachers. Area residents should be grateful for what is essentially a free online advertisement for why they should enroll their children somewhere else.