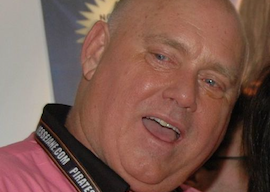 The Week’s Most Pornographic, Typographic, and Demographic Headlines

Despite the fact that several polling places featured signs clearly announcing that Hof was dead, he picked up 68.3% of the vote in his quest to represent the Nevada Assembly’s 36th District. His opponent, a Democrat with the decidedly un-Nevada-like name of Lesia Romanov, managed to scrape up only 31.7% of the vote despite clearly trouncing Hof when it comes to having a heartbeat.

Hof had run a failed campaign in 2016 as a libertarian but was only able to win the prize after recasting himself as a MAGA Republican—the “Trump from Pahrump,” as he called himself.

Since—being dead and all—Hof will be unable to perform the duties of his office, local Republicans will choose someone in his stead. We hope it’s a hooker with DD breasts.

KAVANAUGH ACCUSER SAYS SHE MADE IT ALL UP
In the rape-hysterical caterwauling that preceded Brett Kavanaugh’s recent confirmation as a US Supreme Court Justice, Democrats and their entertainment-industry slaves urged us to “Believe Women,” pooh-poohing the documented fact that women very often lie about rape.

One of Kavanaugh’s accusers, a certain Julie Swetnick, originally claimed that she saw him and a male cohort spike a party punch bowl with date-rape drugs and named several witnesses who she said would corroborate her story. She later walked back this allegation to state that she saw Kavanaugh standing near the punch bowl. As luck would have it, none of her alleged witnesses corroborated her story.

Now comes news that a woman who on October 3 accused Kavanaugh of violently raping her in the backseat of a car in a “vicious assault” made up the entire tall tale merely to derail Kavanaugh’s nomination. Congressional investigators identified and contacted Judy Munro-Leighton as the woman who on October 3 had sent an email that began with “I am Jane Doe from Oceanside CA — Kavanaugh raped me.” Speaking by phone, she allegedly admitted that she “did that as a way to grab attention…I was angry, and I sent it out.”

We’ve been saying this for years—don’t believe women unless they’re telling the truth. If you were ever curious why misogyny exists, a one-word answer will suffice: women.

MAN PETITIONS COURT TO DECLARE HIM 20 YEARS YOUNGER
By now you are probably so tired of the term “transgender” that you wish they’d all go live on some fruity little island and we can just get back to calling them what they’d been known for throughout history—as “transvestites” or “crossdressers.” By the way, when was the last time you even heard those two terms?

You are also probably somewhat dimly aware of the term “transracial,” the idea since race is only a social construct, you can be whatever race your sick mind tells you that you are. For reasons they have yet to explain—since there is no reason that would be remotely reasonable, not that it’s ever stopped them before—leftists say that it’s possible to change your sex but not your race.

But now comes a man who claims he is “Trans-Age.”

“We’ve been saying this for years—don’t believe women unless they’re telling the truth.”

Dutch pensioner Emile Ratelband is 69 years old but claims he doesn’t feel a day over 49. He has petitioned a court in his hometown of Arnhem to alter his birth certificate so that it says he was born in 1969 rather than the truth, which is that he slid out of his mother’s little wooden clog of a womb in 1949.

He says that part of the reason he’s requesting the switch is because it would make it easier for him to find matches on dating applications. “If you’re 69 on Tinder, you’re outdated,” he complains, saying that friends have urged him to merely pretend he’s younger. “But I don’t want to lie,” he explains. “If you lie, you have to remember everything you say.”

Ratelband claims that when he originally proposed the age change, the judges thought he was “crazy” and “laughed like little girls.” But he says they warmed up to his idea after he delivered a soul-stirring, show-stopping Mr. Smith Goes to Washington speech about human rights and freedom. A self-admitted admirer of Donald Trump, Ratelband says that the main issue is the freedom to determine one’s own identity:

Well, for one, you’d be lying—just like all those dudes who claim they’re chicks.

But the problem with being white, as many white people are beginning to realize, is that it disqualifies you from receiving taxpayer-funded minority grants.

Seeking the strange sort of “authenticity” that comes from making entirely inauthentic claims, Lennon reinvented himself as a black man. He chose the name Taharka Ekundayo, which we believe may be Egyptian for “white man who pretends he’s black to win grant money.”:

It was “passing” as black that enabled Lennon to receive taxpayer funds as a “BAME”—black, Asian, and minority ethnic—and to callously step on the authentically black necks of Negroidal thespians who are now irked that he stole their free money.

We are quite content to let them fight it out among themselves, provided that we have front-row seats in the Coliseum.

VOTERS ELECT BUMPER CROP OF LESBIANS
Hoist a frosty mug for the carpet-munchers and clam-lickers out there—there are now more lesbians holding public office than there were a week ago. This is great news for lesbians and everyone else who hates men!

In Michigan, a “Jewish lesbian lawyer” named Dana Nessel was elected the state’s Attorney General after a campaign that she launched by claiming that she was the only candidate who wouldn’t potentially flash her penis at people because she didn’t have a penis.

In Minnesota, “Lesbian Angie Craig” unseated a lawmaker who was described as “anti-LGBT” but probably only thinks these people are weird and damaged like most people do.

In case you were unaware, this is progress.

STUDY: MEN AFRAID TO PERFORM C.P.R. ON WOMEN DUE TO #METOO
In yet another stunning victory for the #MeToo movement, a recent study from the University of Colorado finds that people are less likely to perform CPR on women than they are on men—even if the “woman” is simply a virtual-reality avatar.

In a separate study, respondents claimed that two of the main reasons they were more hesitant to resuscitate women than men were:

• Potentially inappropriate touching or exposure;
• Fear of being accused of sexual assault

Great job, all you “activists.” You’ve ratcheted up the moral hysteria to the point where people would rather let you die than have you falsely accuse you of touching their naughty bits.