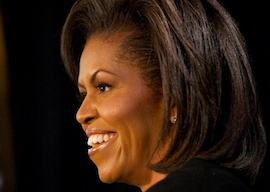 The Week’s Most Diverse, Averse, and Perverse Headlines

MICHELLE OBAMA: PRETTY, YOU KNOW, LIKE, DUMB
Michelle Obama is easily the most famous and beloved big-shouldered transgender black male in the entire solar system. As a Man of Color who transitioned to a Woman of Color, Obama knows oppression and suffering from multiple uncomfortable angles.

Although it’s not certain whether she intends to run in 2020 against that racist monster we currently have in the White House, Obama and her gigantic, muscular haunches recently launched a book tour to promote something she allegedly wrote that presumably details the horror and pain of being so oppressed that you go to Princeton due to affirmative action and wind up in the White House, only to spend the rest of your life sleeping on pillows stuffed with $100 bills and receiving a tongue bath from every fawning leftist broadcaster on the planet.

Even though her enablers at ABC heavily edited their interview with Obama down to 45 seconds, it still made her sound like a brain-damaged Valley girl. She was able to sprinkle 10 instances of “you know,” nine “likes,” and five “ums,” “yeahs,” and “whats” in under a minute.

Without affirmative action and a cultural climate that dictates black people can do no wrong, Michelle Obama would be strung out on crack with five babies from four dads and living on public assistance in a South Chicago housing project.

ILLEGAL ALIEN LEAVES SANCTUARY CITY, GETS ARRESTED FOR TRIPLE MURDER
When Donald Trump announced his candidacy back in June 2015, he was excoriated for daring to imply that Mexico wasn’t sending its best people to the USA.

If Luis Rodrigo Perez is one of Mexico’s best people, we shudder to think about what sort of subhuman mutants represent the bottom of that nation’s algae-choked gene pool.

Perez stands accused of a triple murder last week in Missouri that some say could have been prevented if he hadn’t been detained in a New Jersey “sanctuary county” last year and had instead been returned to the intensely backward country of his birth.

ICE officials say that they placed a detainer request for Perez back in December 2017, but it was ignored by authorities in Middlesex County, NJ, which is a “sanctuary county” that allows low-IQ, low-height aliens to flout federal immigration laws with impunity. According to ICE executive associate director Corey Price:

Had ICE’s detainer request in December 2017 been honored by Middlesex County Jail, Luis Rodrigo Perez would have been placed in deportation proceedings and likely sent home to his country — and three innocent people might be alive today.

But even though Perez had outstanding warrants in New Jersey, authorities released him in February. Charging documents in Missouri said that his three alleged murder victims could be heard “begging for their lives.”

If Donald Trump wishes to be reelected in 2020, all he’d need is a sound recording of those victims begging for their lives.

JAPANESE MAN MARRIES HOLOGRAM
Akihiko Kondo is a socially and sexually maladjusted 35-year-old Japanese male who spent nearly $20,000 to marry a hologram of “an animated 16-year-old with saucer eyes and lengthy aquamarine pigtails,” which we suppose also makes him a digital pedophile in addition to an intensely weird dude.

During his teen years, he was allegedly rejected repeatedly by real-life girls, who referred to him as a “creepy otaku,” the latter word of which is a Japanese synonym for “geek.”

Rejected by flesh-and-blood women, Kondo fell deeply in love for Hatsune Miku, a virtual-reality singer who exists only as a hologram in a desktop device that hovers near his bed. He also carries a doll version of Miku that allegedly sleeps next to the slant-eyed pervert. Regarding his beloved hologram, he says:

I never cheated on her, I’ve always been in love with Miku-san. I’ve been thinking about her every day. I’m in love with the whole concept of Hatsune Miku but I got married to the Miku of my house….Miku-san is the woman I love a lot and also the one who saved me.

We can’t imagine why all those normal women rejected him.

A BUMPER CROP OF FALSE RAPE CLAIMS
Despite the primitive and toxic gender morality tale that dictates women are always innocent and men are always guilty of at least being men, we have always made it sparklingly clear that women lie about being raped, and anyone who doesn’t believe this should probably endure a false rape allegation or two before they recant and beg for our mercy.

“Michelle Obama is easily the most famous and beloved big-shouldered transgender black male in the entire solar system.”

In Spain, a woman has been arrested for fabricating a tall tale about being kidnapped and gang-raped by four men after it was revealed she made it all up because she’d been boinking her neighbor and didn’t want her partner to know the truth.

In Florida, a 23-year-old convicted shoplifter is facing charges for lying to the police about how a male arresting officer stuck a gun in her mouth and anally raped her. Dashcam video of her arrest reveals that not only did none of this happen—she had been arrested by a female officer.

In Texas, a young man avoided a potential 99-year prison sentence when time-stamped and geo-located selfies posted online proved that he was 65 miles away from his ex-girlfriend when she says he burglarized her house, raped her, and carved an “X” into her chest with a box cutter. It turns out that the wicked little witch had carved the “X” into her own chest, apparently frustrated that no one was so overcome with desire for her that they felt compelled to rape her.

In Michigan, a woman who put a man away for nearly 10 years on a false rape charge is nearing the end of a five-year sentence for lying to police. The male victim of her false charges is rightfully furious that his accuser will only do half the time in prison that he did.

And in Pennsylvania, a 25-year-old man with tattoos all over his face is charged with falsely accusing a jailhouse cellmate of raping him. We’ve finally found something sadder than attempting suicide and failing—going to jail and getting upset that no one wants to rape you.

“VAGINA MONOLOGUES” PREJUDICED AGAINST WOMEN WITH PENISES
Since everyone knows it’s a scientific fact that women have penises, the super-annoying and sloppily produced play The Vagina Monologues—even though theatergoers pay full price, they are forced to sit and watch three dumpy broads in sweatshirts sitting onstage and reading from cards—has been canceled by Eastern Michigan University because the aggressively pro-woman play refuses to acknowledge, honor, and bow before the experiences of men who think that they’re women.

The university’s Women’s Resource Center—which probably wasn’t founded on the idea that men are women, too—defended the play’s cancellation:

We feel that making this decision is in line with the WRC mission of recognizing and celebrating the diverse representations of women on campus along with the overall mission of the Department of Diversity and Community Involvement, in which the WRC is housed, of supporting and empowering minoritized students and challenging systems and structures that perpetuate inequities. We truly believe that it is important to center our minoritized students and this decision is in line with this mission driven value….This created a need to ask the question: Do we still need ‘The Vagina Monologues?’ And, are ‘The Vagina Monologues’ still relevant to next generation feminists?

Wait a minute—when did “minority” become a verb? These chicks are crazy.

A survey from the UK reveals that despite the intense propaganda and show trials of anyone who questions whether men can ever actually be women, only one in seven adults say they actually believe that nonsense.

JADA PINKETT SMITH’S RACIST HATRED FOR BLONDE WOMEN
Jada Pinkett Smith is the wife of film superstar Will Smith, a black man who achieved worldwide fame because he was that rare representative of his breed who seemed as if he wasn’t ready to rape you at a moment’s notice. Ms. Smith is also the mother of Jaden Smith, who may be the dumbest person in the world right now.

In a recent roundtable discussion, Smith admitted that she hates blonde women—not because they are more beautiful than her, which is the obvious answer, but because she claims they bullied and tormented her when she was just a young chocolate sprout:

I do have my own biases, specifically to blonde women…. All throughout my childhood. I do remember experiencing being teased by white women in regards to my hair, how I looked, feeling belittled….That doesn’t give me the right to clump all blonde women in one….And look at me, I got blonde hair! It’s no different than you getting robbed by a black guy once and now you’re saying all black dudes are thieves and dangerous.