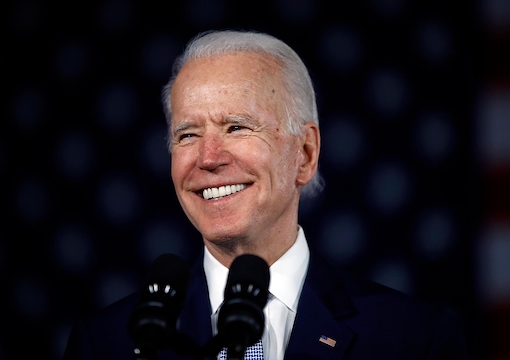 JUMPIN’ JOE FLASH, IT’S A GAS GAS GAS!
Last week’s 2021 U.N. Climate Change Conference was held in Glasgow, but President Biden made it Gasgow. According to British papers, Joe blew ’em away, letting out what Camilla Parker Bowles described as a fart that “was long and loud and impossible to ignore” while speaking with members of the royal family and Prime Minister Johnson.

According to the Mail on Sunday, Biden’s baroom was so disruptive, “Camilla hasn’t stopped talking about it” since. And Johnson reportedly remarked to aides, “Maybe we should’ve held the damn conference in Tooting.”

The Mail claims that Biden’s blowout made Ms. Bowles blush, perhaps the most geopolitically significant example of an “attack of the vapors” in history.

The jokes about this are too easy: The president letting one rip at a conference convened to reduce noxious emissions, curb natural gas, cut methane, and increase the use of wind. In fact, it’s because the jokes are so easy that perhaps the real story is that the incident was ignored by Saturday Night Live, which aired a show just days after Biden’s Bhopal.

Keep in mind that fart sketches are an SNL specialty. In 2009 Seth Meyers penned one in which Grace Kelly (played by January Jones) can’t stop farting while filming Rear Window. That was the sole joke; she keeps breaking wind. Worse, it was a near-plagiarism of a much funnier 1993 sketch with Kevin Kline as a farting Italian movie star.

After Rudy Giuliani was rumored to have farted during a voter fraud hearing last December, cast member Kate McKinnon debuted her “farting Rudy” character (again, that was the entire gag: He farts).

Back in 1998, HBO’s Mr. Show even did a parody about a presidential farting scandal. Yet on lunatic leftist David Cross’ Twitter page, no victory lap, no attempt to use the Glasgow incident to remind people of when he was still funny.

Anyone who thought that Trump’s defeat meant comedians would go back to mocking politicians of all stripes was quite mistaken.

BEEN THROUGH THE DESERT ON A HORSE WITH DEADNAME
Dr. “Rachel” Levine looks like a cross between Brent Spiner in Independence Day and Riff Raff from Rocky Horror. And that’s the most complimentary thing that can be said about the transgender monstrosity who, as Pennsylvania’s Secretary of Health, pulled “her” mother out of a nursing home before filling it with Covid carriers.

And now thanks to the nursing-home resident in the White House, Levine just became either America’s first female four-star admiral or first transgender four-star officer. The media can’t decide which “first” to go with: first woman? Or first tranny? If the latter, then it’s not really the former.

Last week Republican Congressman Jim Banks of Indiana finally had his official Twitter account restored after being banned for tweeting “The title of first female four-star officer gets taken by a man.” This violated Twitter’s policy of no “deadnaming” (calling a tranny by their pre-trans name), although technically Banks “deadgendered” the four-star shemale.

Funny enough, if you’re trying to find Levine’s “deadname,” you’ll have quite the task. Big Tech’s pulled out all the stops to cover up Admiral Horatio Hormoneblower’s birth name. Wikipedia’s banned any reference to it, even though the site always includes the “deadnames” of actors (Olivia Wilde never calls herself Cockburn, nor does Bruno Mars use Petey Hernandez, but Wiki still retains the info).

The “talk” link on Levine’s Wiki page is instructive: Wikipedia threatens “sanctions” against users who try to add “pre-transition names” to biographical entries, as doing so violates “the purpose of Wikipedia.” “Former, pre-transition names may only be included if the person was notable while using the name.”

Which oddly doesn’t apply to Olivia Cockburn or Petey Hernandez.

But hey, they’re not a marginalized, persecuted minority…like the trannies who have the president, the medical establishment, and every tech monopoly running interference for them.

Not so in merry olde England, where Twitter jail comes with real bars.

21-year-old Nathan Blagg really loves his Chelsea football club. So much so that between September 2020 and February 2021, Blagg tweeted out several offensive comments with the intention of taunting longtime rivals Tottenham Hotspur, a team with a Jewish fan base (odd considering the name contains “ham”).

One would think that in the world of British football rivalries, which have a storied history of large-scale riots, a few tweets wouldn’t be that big a deal. But this ain’t yer bleedin’ granddad’s England. This is the new woke Britain, where Crown prosecutors with names like Gujuratabindi and Umbabwego and *clicking noise with tongue* work tirelessly to ensure that Britons ever, ever, ever shall be slaves.

Because Blagg’s tweets mocked Jews, he was charged with seven counts of Twitter racism in a Westminster court. Prosecutor Kalsoom Shah (obviously a person with deep Anglo-Saxon roots) demanded the maximum sentence. After all, Blagg was a serious offender, not an innocent victim of cultural misunderstanding like those Muslim grooming gangs.

“You know Western Europe’s in trouble when the sanest country is France.”

And the court agreed. Eight weeks for the villainous Blagg—one for each anti-Semitic tweet, and an extra one for liking the Benny Hill Chinaman sketch.

Frankly, it’s hard to get angry at Joe Biden for ripping one in the face of the royals. A nation formerly proud of its free-speech traditions has become a suitable repository for Biden’s Magna Farta.

HI-JAB, BYE-JAB
You know Western Europe’s in trouble when the sanest country is France. After all, these are the imbéciles incroyables who couldn’t conduct a simple revolution without beheading half the populace.

Last week, members of something called the “Council of Europe,” apparently a continental “human rights” organization, decided to hold a contest to see who could come up with the most Orwellian slogan for a new antiwhite, anti-Christian ad campaign. The winning scheme was a series of billboards showing a white chick wrapped in a hijab, with the slogan “Hijab Is Freedom.”

The new campaign was supposed to be announced by Council Secretary General Marija Pejčinović Burić, but she had to flee the press conference when she couldn’t figure out how to pronounce her name. Council President Péter Szijjártó tried to fill in but was hamstrung by the same problem. Finally, Flemish Council member Hendrik Daems took over, telling the assembled reporters, “Joot hoot boom boom bork hoog roop,” which everyone assumed was Dutch until it turned out he was actually having a stroke.

Bungled presser aside, the billboards started going up all over the continent, until the French, of all people, objected. The French government condemned the campaign as going against European values of secularism, adding that the slogan wasn’t so much a defense of the hijab as an encouragement to don one. Faced with the French protests, the Council discontinued the campaign, blaming the failed slogan on “Muslim youth” who participated in an “online workshop.”

And to be fair, of the top two slogans to emerge from that workshop, “Hijab Is Freedom” is certainly better than the runner-up, “Tottenham Hotspur Jews Are Our Misfortune.”

No word yet on when those billboards will be going up.

BROTHERS, SMOTHERED
Sometimes it’s good when America “falls behind.” Like in mass tramplings and smotherings.

The deaths at the Astroworld music festival hosted by rapper Travis Scott (whose name is better suited to a country Western dude in a ten-gallon hat than a cornrowed thug with pants down to his thighs) was a tragic occurrence. Eight unfortunate concertgoers were killed when the crowd surged forward during Scott’s set, smothering and/or trampling those closest to the stage.

But QAnon believes it to be much more than an accident. The people who brought you “JFK will rise from the grave and install Trump as president” now bring you “the Travis Scott concert crush was a sacrificial offering to Satan.” Videos on TikTok and YouTube by QAnoners and related conspiracy tards (which currently have millions of views) employ bizarre interpretations of facial expressions, the shape of the stage, and times and dates to “prove” that Scott engineered the disaster to satisfy the Dark Lord and keep him knee-deep in souls.

Scott: “Oh hoary host of the netherworld, I present to you these eight souls!”

The Devil: “Eight? Eight? You holdin’ out on me, bitch? Don’t make me go upside yo’ head.”

Fortunately, U.S. venues are pretty damn competent when it comes to safety and crowd control, at least compared with the rest of the world. After seeing some genuinely terrible crowd crushes in the first half of the 20th century (notably the Michigan Italian Hall disaster of 1913, in which 73 people were stampeded because some jokester falsely yelled “fire”…and yes, that’s where the cliché comes from) and a few minor ones in the latter half (11 crushed at a Cincinnati Who concert in 1979), venue owners, fearful of lawsuits, became very conscientious regarding crowd control.

So if the Devil went down to Houston lookin’ for some souls to steal, he really shoulda known that the pickin’s would be slim. Hell, the 2015 Hajj stampede in Saudi Arabia took 2,400 lives, and the 2010 water festival stampede in Cambodia claimed 347 (worst water festival ever).

Stick to the Third World, Beelzebub. We have building codes here.

In fact, the only other two recent non-fire-related crowd stampedes in the U.S. were the 1991 CCNY rappers basketball game disaster (nine dead) and the 2003 Chicago hip-hop nightclub trampling (21 dead).

It might just be that the problem isn’t Satan, but rap fans.