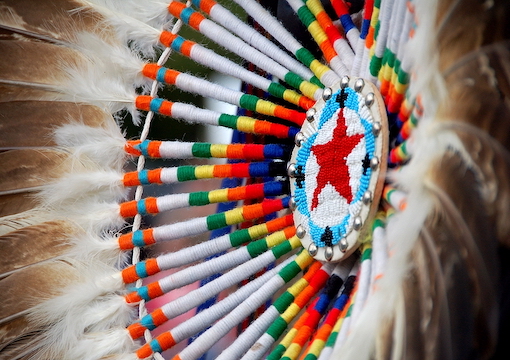 The Week’s Most Cradling, Ladling, and Dreideling Headlines

INDIGENOUS INDIGNITIES
Last week was a bad one for fake Injuns.

First there was Lewis Rath, an emaciated vegan hipster artist who’d been selling handcrafted totem poles claiming to be an Apache woodworker. Turns out Rath’s as “Apache” as the Queen of Denmark (though far more svelte), and what impossible-burger-boy failed to factor into his con is that it’s a federal crime to sell fake Native American crafts.

Upon learning of Rath’s fate, Carrie Bourassa exclaimed, “Hold my yaupon!” Bourassa, Canada’s top “indigenous health expert,” was also exposed as a fraud last week. Turns out the yenta who’s been lecturing her nation about “native rights” is 100% Eastern European—not a drop of “indigenous” blood.

Her story began to unravel after she did a TEDx talk dressed like an extra from F Troop. Skeptical activists, suspicious of her store-bought getup, began researching her ancestry. And last week the Slavic squaw was forced to admit that her connection to “natives” went no deeper than a shared love of vodka.

Bourassa was fired from her government job and university professorship. She’s now selling illegal fireworks to black kids in the Detroit-Windsor Tunnel.

And across the ocean, a dude named David Cole, who claims to be an Australian aboriginal “tribal leader” named “Lurnpa Lurnpa” (he makes chocolate while singing), was busted after releasing a video telling abos to avoid the Covid vax because it’s a “Zionist bioweapon” engineered by “Rothschilds and pedophiles” to “genocide” the natives.

Reached for comment, Takimag columnist David Cole stated, “I wish this idiot would stop besmirching my good name with his inflammatory hate speech.”

He then paused and added, “Jesus Christ, I never thought I’d hear those words come outta my mouth.”

LAND O’LAMES
Of course, there’s an irony to the whole “fake Indian” thing: While whites posing as natives are an annoyance, actual Injuns can be a far worse pain in the ass.

Roman Rain Tree represents the Mono Indians of Northern California (Mono Indians can be identified by their extreme fatigue and swollen lymph nodes). And Mr. Tree is a brave on a mission: to force the Fresno County town of Squaw Valley to change its name. Sure, Squaw Valley may have only 3,500 residents. And sure, nobody’s heard of it (there used to be a “Squaw Valley” ski resort near Tahoe, but they changed the name this year in honor of George Floyd, because the resort’s directors have brain damage from skiing into trees). But as long as this little town in the middle of nowhere retains the name “squaw,” Native Americans will never know true peace or a moment’s sobriety.

“Squaw” is in fact a perfectly normal Algonquin word for “woman,” and the people of Squaw Valley are quite happy with the moniker. And when Rain Tree partnered with the ACLU to force the name change upon the reluctant residents, it totally didn’t help, as it gave the impression that a bunch of New York Jewish attorneys were trying to decide the town’s title (“Oy, how about Goyim Gulch?”).

Local leftist Bob McCloskey is one of the few residents on Rain Tree’s side. McCloskey told The Guardian that all “triggering” names should be changed, out of empathy for the triggered. When reminded that “McCloskey” in Gaelic means “resounding noise; blast” (a trigger for the noise-sensitive) and that the family crest is a masculine arm uprooting and choking an oak tree (toxic masculinity!), and when asked if he’d change his name to “Jazzhands McTreehugger” to mollify the triggered, McCloskey pointed to a window and said, “Holy cow, look at that!” and then ran away when everyone’s heads were turned.

Rain Tree ended his Guardian interview by stating, “The spirit of the community is not defined in the name,” thus fully contradicting his entire point and proving once again that the Injuns didn’t lose the continent by accident.

“WE WILL BE BURIED BY YOU”
“The capitalists will sell us the rope with which we’ll hang them.” This oft-quoted apocryphal Leninism is not quite as pithy as those who invoke it believe it to be.

A more accurate version would be, “The capitalists will buy from us the sneakers with which they’ll clobber themselves.”

When Khrushchev banged that infamous shoe and threatened to “bury” the West, little did he know that 65 years later, the West would be banging Chinese-made shoes and promising to bury itself.

“While whites posing as natives are an annoyance, actual Injuns can be a far worse pain in the ass.”

The Communist Party is celebrating its hundredth year. So is JP Morgan. I’d make a bet we last longer. I can’t say that in China. They’re probably listening anyway.

Yes, Jamie, they were. And they no likey jokey. After all, murderous communist dictators are right up there with trannies on the list of disenfranchised victims who must be protected from comedy.

Don’t “punch down,” Jamie. Never “punch down.” You made Xi cry as he was ordering the execution of entire Uyghur villages and preparing the invasion of Taiwan.

After the CCP sent LeBron James to Dimon’s house with an official government letter threatening to stop doing business with Chase, the CEO had an immediate change of heart, offering a series of groveling apologies:

I truly regret my recent comment because it’s never right to joke about or denigrate any group of people, whether it’s a country, its leadership, or any part of a society and culture.

A man of integrity! Exactly the kind of guy who’d have begged Hitler to open a Chase account to deposit the money seized from Jews.

Coming soon to Beijing: the Chase Social Credit Card—5% cash back every time you inform on an enemy of the state.

A DOG MEAT DOG WORLD
The notion that Koreans eat dogs is racist, and anyone who spreads that myth deserves swift and merciless cancellation.

Two years ago, denim bobblehead Jay Leno was boycotted by Asian activists for cracking a “Koreans eat dogs” joke on America’s Got Talent. The activists denounced the quip as playing on “hurtful stereotypes.” Leno embarked on a mass-media apology tour, because being rich and retired doesn’t mean you still can’t be a doormat for a few fuming busybodies.

In response to Leno’s joke, food site ZenKimchi laid down the law: Koreans do not eat dogs!

Odd, then, that South Korea’s president just launched a commission to study phasing out the “centuries-old practice” of eating dogs.

Why launch a commission to end something that doesn’t exist? That’s rather like Joe Biden promising to ban flying giraffes (to be fair, Joe really does see the giraffes…and they talk to him, too).

According to ABC News, 1.5 million dogs are slaughtered each year by “thousands” of “dog farmers” throughout South Korea, as part of an industry that brings in “hundreds of millions of dollars annually.”

Strange stats for something that doesn’t happen.

Korea’s dog farmers oppose the president’s commission, claiming that censoring Western comedians is preferable to actually closing the canine chop-shops. But Korean animal protection activists counter that the best way to get Westerners to stop joking about Koreans eating dogs is for Koreans to stop eating dogs. “South Korea is the only developed country where people eat dogs, an act that is undermining our international image,” activist Lee Won Bok told ABC.

Good luck changing the mores in a nation where Marmaduke runs in the gourmet recipes section of the newspapers.

THE BEST-LAID GENERALPLANS
In this week’s “dumbass does dumb thing for dumb reason” story, Jon Minadeo is a dumbass who did a dumb thing for a dumb reason. The 37-year-old California neo-Nazi has a history of orchestrating stunts to publicize his anti-Jewish/flat-earth website Goyim TV. Past exploits have included unfurling a banner with the site’s URL over the 405 freeway, and placing similar banners throughout the Bay Area.

Last week, Minadeo topped himself with what he surely must’ve believed would be his greatest stunt to date: On the first night of Hanukkah, he placed fliers advertising his site on the doorsteps of homes throughout Beverly Hills. The fliers claimed that Covid is a Jewish plot to genocide the white race (no word if they were coauthored by a fake Australian aborigine).

The problem was, L.A.’s been plagued by mighty windstorms over the past week, so in order to weigh down the fliers to ensure they wouldn’t blow away, Minadeo enclosed them in bags of rice.

Somehow he thought that gifting Beverly Hills Jews with a bag of free rice would…upset them.

For a professional anti-Semite, he doesn’t know his opposition very well.

As Hanukkah began, the local Jews thanked G*d for the miracle of the free rice, and either prepared it themselves for dinner or gave it to their housekeepers in lieu of a Christmas bonus.

If it seems idiotic that a career anti-Semite would try to “own” the Jews by giving them free food, just remember: Jon Minadeo is an idiot, so everything makes perfect sense and all is right with the world.