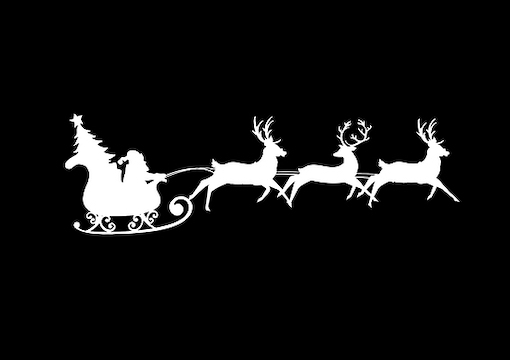 The Week’s Most Shaking, Baking, and Merrymaking Headlines

“I’M DREAMING OF AN ANTIWHITE CHRISTMAS!”
BLM has declared war on Christmas. After all, who’s more of a white supremacist than Santa? White elves outnumber black ones in his workshop (except in the basketball shoes department, where Santa uses Chinese orphans). He doesn’t have a single reindeer of color (Dasher, Dancer, and Vixen? Why no Dashiki, Twerker, and Norm Nixon?), he gives toys to all children instead of prioritizing those whose lives “matter,” and he culturally appropriates the Pan-African colors of red, black, and green.

So to bring “equity,” BLM has laid down the law: This Christmas, blacks must not patronize “white companies.”

Some initially questioned whether BLM was actually behind the campaign because the press release contained no spelling errors. But it’s for real: BLM commands that blacks must only buy Christmas gifts from “black” businesses.

So that’s a bean pie for mom, crack for dad, and as for gramps, well, what do you give the man who has sickle cell?

Surprisingly, “#BlackXmas” isn’t going over too well on “Black Twitter,” where the BLM grifters might’ve finally overplayed their hand. Turns out most black kids don’t care about the color of the people who make their Christmas toys.

Reporters tried to elicit comment from con woman BLM cofounder Patrisse Cullors, but she hid behind her collection of Fabergé eggs on the upper floor of one of her multimillion-dollar homes.

And attempts to speak with Shaun King were equally unsuccessful, as he ran into a snowbank and blended in like an arctic hare.

SHEMALE-ON-SHEMALE VIOLENCE
Who doesn’t love a good catfight? From the days when Emma Peel would engage with beautiful female adversaries, all involved clad in leather, femme-on-femme fights have always carried a certain sex appeal.

But welcome to 2021, when any mentally ill, pathologically violent dude who wants to assault a lady can don a wig and the press will dub it a catfight.

A woman-on-woman sexual street assault? Sounds improbable, if only due to the complex gymnastics of scissoring.

“A woman-on-woman sexual street assault? Sounds improbable, if only due to the complex gymnastics of scissoring.”

Turns out “Lisa Jones” is a man (baby), a convicted sex offender who did six years in a men’s prison for raping a child, only to then don a dress and wig, so that all further rapes “she” committed would be considered chick-on-chick crime. And of course the Aussie press is going along with the gag (to be fair, Aussies, their brains scrambled from two straight years of mandatory 24/7 masking and forced medication, probably lack the cognitive ability to differentiate a sheila from a shemale).

Melbourne judge Pardeep Tiwana expressed sympathy for Jones, asserting that the “traumatic and harrowing” experience of being a tranny in a men’s prison caused “her” to commit the latest assault.

When a courtroom observer suggested that expressing pity for a child rapist was not the act of a sane human, Pardeep replied, “Dude, I worship a four-armed elephant. You expect sanity?”

Jones will be free to rape again in 22 months. And if any of this seems impossibly asinine to you, just remember that this is the nation where for over thirty years Yahoo Serious has been allowed to identify as “funny.”

But there’s one thing about which blacks and Jews see absolutely eye-to-eye: In law and justice, there’s no such thing as a dead horse. That 99-year-old German who delivered a box of käsespätzle to Auschwitz Commandant Hoess in 1944 must be tried at once! That he’s blind, dumb, has cancer and dementia, and can only communicate by farting in Morse code matters not.

There’s no statute of limitations (or mercy, wisdom, or common sense) regarding anyone who was peripherally involved in the Holocaust.

And now a bunch of people who couldn’t spell Wiesenthal for a million bucks are walking in the old Nazi hunter’s shoes. Black activists have persuaded the Biden Justice Department (a.k.a. “BLM-by-the-Potomac”) to go after any whites who might still be prosecuted for something—anything—involving old cases in which racist whites murdered blacks.

Naturally, Biden’s hacks are starting with the man The New York Times just can’t stop talking about, Emmett Till. And while the Times has certainly done a yeoman’s job of keeping Till’s memory alive (though perhaps they overdid it by serving “Emmett Tillapia” in the commissary), Biden’s race hustlers are upping the game by prosecuting an octogenarian who supposedly badmouthed Till in 1955 (Biden, who believes it still is 1955, cheered the effort).

Unfortunately, after months of investigative work and millions of taxpayer dollars, the Justice Department was forced to announce last week that it turns out the author who claimed the old lady badmouthed Till was in fact badmouthing the old lady by inventing a quote she never uttered.

Still, vengeance is vengeance! Time to go after people who claim that other people badmouthed Emmett Till 67 years ago.

Justice demands no less. Neither does insanity.

TODAY FREDO LITIGATES ALL FAMILY BUSINESS
There was a time in New York when the Cuomo name conjured up images of a crafty politico with secret Mob ties, a man you wouldn’t dare cross, lest you find a horse head under your sheets or a dead hooker on your floor.

But it turns out the Cuomos are a Corleone family with no Michael. Just a Sonny, who recently got whacked by two dozen women riddling him with assault accusations, and a Fredo, who’s too dumb to know he’s dead.

After committing so many ethical infractions that even his benefactor Hyman Roth (sorry, Jeff Zucker) turned on him, disgraced “news”“man” Chris Cuomo is refusing to give up the ghost. Even though the accusations against him are proven beyond doubt, and even though CNN has a right to fire anyone who violates their journalistic ethics policies (which can be found in any CNN bathroom in lieu of toilet paper), Cuomo has lawyered up, reportedly demanding $18 million in compensation for being fired for accusations he doesn’t deny.

It’s rather like if in Godfather II, after Neri shoots Fredo point-blank, Fredo just sits there and says, “Quiet, you’ll scare the fish.”

According to Vanity Fair, Cuomo’s entire case rests on a single argument: “Yes, I committed all those offenses, but Zucker let me, so give me $18 million.”

“Yeah—I totally murdered Govanni ‘The Lips’ Manicucci, Matteo ‘Madman Matty’ DiLuca, and Carlo ‘Unhealthily Obsessed with Taylor Swift’ Cacciatoria, but since the boss knew about it, I should be held blameless!”

Genius. A strategy fit for a Cuomo.

CNN has lawyered up too, so hopefully the entire affair will end in a shoot-out on courthouse steps with no survivors, everybody’s business settled with finality, and the world a better place.

A FLAMING LOSER
Hollywood routinely presents a ridiculously false view of how fire behaves. Any car that drives off a cliff explodes—sometimes in midair! And humans are flammable creatures that catch fire without an accelerant. Oh, and if you soak your home in gasoline and light it, as your furniture and belongings burn, there’ll be no smoke (why those “firefighters” constantly complain about “smoke inhalation” is a mystery…crybabies!).

Unfortunately, people who try to use fire in real life for nefarious purposes often find that she’s a cruel and unpredictable mistress. Take Julio González. In March 1990, the unemployed immigrant was angry at his girlfriend for breaking up with him. So he went to where she worked as a hostess—a “Garifuna” (Afro-Carib Honduran) underground dance club in the Bronx—and set the building aflame.

Eighty-seven people died (the fire was aided by the fact that the interior design of the club consisted of trees where clubgoers could sit bare-assed to replicate their natural environment), but González’s girlfriend just strolled out the back door.

The point being, fire is much harder to predict than movies make it seem. Good for grilling, bad for anger-fueled revenge.

Last week, a Maryland homeowner discovered this the hard way. The homeowner, unidentified in the press but probably named Dipstick McTardiman, found some snakes in the basement of his $1.8 million three-story 6,228-square-foot manor in Dickerson. Enraged, he decided to burn them out by tossing red-hot coals into the basement, unaware of what would happen when the coals came into contact with the many combustible materials stored down there.

It took 75 firefighters to extinguish the resulting blaze. The good news for McTardiman is that the snakes are gone. The bad news is he’s now the owner of a $1.80 pile of smoldering ash.

No word on how this rocket scientist came to possess such a massive “manor” in the first place, but rumors range from inheritance to “finding a genie in a bottle.”

A spokes-snake issued a public apology, admitting that it’d been unfair to infest the house of a man with a brain so much smaller than theirs.