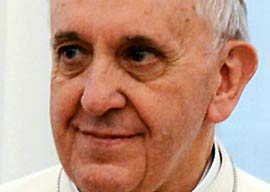 The Week’s Most Demonic, Sardonic, and Chthonic Headlines

POPE TO GAY PRIESTS: TAKE A HIKE
In a new book based on an interview he gave in August, Pope Francis paused briefly from being a communist to say that the Catholic clergy must purge itself of all rump-wranglers and bone smugglers.

In case you’ve been living under a rock for the past two thousand years, The Holy Bible is explicitly against homosexuality and implies that the very thought of faggotry makes God puke. Despite this, the current official Catholic doctrine about faggin’ off teaches that having homo tendencies isn’t sinful—but acting on them is.

As everyone is aware, the Catholic Church has for the past generation suffered a massive open bleeding public-relations wound due to thousands of allegations of priests taking sexual liberties with boys and young men.

Perhaps realizing that continuing to enable priests to wantonly diddle the Church’s pre-pube male laity would lead to a dip in revenue, the pontiff stated that maybe it’s not a great idea to allow fudge-packers and ass bandits to become priests:

The question of homosexuality is a very serious one…. For this reason, the Church urges that persons with this rooted tendency not be accepted into (priestly) ministry or consecrated life…. It is better that they leave the priesthood or the consecrated life rather than live a double life.

The Pope must walk a tightrope here, for he inhabits a world where molesting boys is still considered uncool, whereas being gay is, like, the coolest thing ever.

UGLY WOMAN SLAMS “GOOD MEN”
Hannah Gadsby is a funny-looking lesbian comedienne who to our knowledge has never said anything funny. From the looks of this monster, her shoulders are bigger than those of half of the Chicago Bears’ offensive line.

On Wednesday the Not-So-Great Gadsby scolded men—and was patted on the back by women—at some event called “Hollywood Reporter Women in Entertainment,” which really sounds like a honkin’ good time.

I find good men talking about bad men incredibly irritating, and this is something the good men are doing a lot of at the moment…. All men believe they are good….Guess what happens when only good men get to draw that line? This world. A world full of good men who do very bad things and still believe in their heart of hearts that they are good men because they have not crossed the line. Because they moved the line for their own good. Women should be in control of that line, no question….Everybody believes they are fundamentally good, and we all need to believe we are fundamentally good because believing you are fundamentally good is part of the human condition. But if you have to believe someone else is bad in order to believe you are good, you are drawing a very dangerous line.

Would one be stark raving insane for suspecting that Gadsby, who has likely been cruelly rejected by men her entire life based on her unfitness as an attractive mating partner, needs to think that men are bad in order to believe she is good?

ANNOYING VEGAN MAN CLAIMS DISCRIMINATION
We have no firm evidence as to why vegans are so annoying, only that they are and refuse to stop. We suspect it’s based on the fact that their diet lacks an essential nutrient that makes people tolerable, because vegans have personalities that even an animal couldn’t love.

A British vegan with the insufferable name of Jordi Casamitjana was recently fired from some animal welfare charity that calls itself The League Against Cruel Sports for what he claims are his passionate and not-at-all-annoying vegan beliefs.

“Is it considered euthanasia to kill someone else in order to relieve your own pain?”

Question: Exactly how annoying does a vegan have to be in order to be fired from an anti-animal-cruelty company?

Answer: As annoying as Jordi Casamitjana.

The annoying vegan has filed a discrimination lawsuit claiming that under the Equality Act of 2010, veganism is a “protected characteristic” that qualifies as a “religion or belief” and that vegans should thus be allowed to annoy and hector everyone within earshot free from the fear of termination. He claims:

It is important for all the vegans to know that if they want to talk about veganism, they are protected and no-one will say ‘Shut up’. It is important that the law protects vegans.

ARCHBISHOP OF CANTERBURY: MIDDLE EASTERN CHRISTIANS FACING “EXTINCTION”
Even though Archbishop of Canterbury Justin Welby looks so squirrelly it’s almost as if you can see eight-legged AIDS viruses scuttling across his vestments, he allegedly has a daughter so we’re not going to jump to any conclusions.

Welby recently warned that the global persecution of Christians is the worst “since the Mongol invasions of the 13th century”:

Christians face daily the threat of violence, murder, intimidation, prejudice and poverty. In the last few years, they have been slaughtered by so-called Islamic State, and in many countries they find themselves squeezed between the upper and lower millstones of pressure on them within society and of conflicts that afflict the region….Many have been killed, enslaved and persecuted or forcibly converted. Even those who remain ask the question, “Why stay?”… ‘Across the region Christian communities that were the foundation of the universal Church now face the threat of imminent extinction.

Some figures suggest that only one in every 400 Syrian refugees granted asylum in the UK last year was a Christian. Welby urged England to accept more Christians—an obvious sign of his incorrigible Islamophobia.

REPORT: NAZIS INFILTRATING GERMAN MILITARY
According to an article in Berlin-based magazine Focus, the German military is infested with a secret cabal of super-evil Nazis who are just itchin’ to stage a coup wherein they usher in a Fourth Reich and gleefully murder anyone who isn’t a Nazi. According to the article:

Numerous interrogations paint a picture of a conspiratorial force that is not supposed to shy away from the killing of political opponents.

The Super Secret Nazis are allegedly planning to murder all the luminaries who’ve enabled refugees to flood Deutschland with “Germans” who are anything but German.

In case you were unaware, in Germany it is currently considered tres gauche to be a Nazi.

WOMAN CONVICTED OF RUNNING ILLEGAL TRANSGENDER CLINIC FOR CHILDREN
As Welsh enablers of sexually delusional children go, we suppose that Helen Webberley is more fetching than your average crater-faced, postmenopausal screeching pterodactyl who sees is as her mission to provide freelance sex changes for the underage. She’s a bit plump, but in the event of a nuclear war she’d probably be fit as a breeding sow.

Webberley was recently fined £14,000 after being convicted of “running an illegal gender identity clinic where she gave hormone treatments to children as young as 12” after being explicitly instructed not to do so. She remains defiant:

I began providing private healthcare to the trans and non-binary community because there was a desperate need and no NHS provision within Wales…I never set out to break the law….The needs of this minority group of people must be recognized…I am taking this fight to parliament.

It’s odd to see someone wax so self-righteous about her presumed right to abuse children.

PETA: “BEAT A DEAD HORSE” IS HATE SPEECH AGAINST ANIMALS
The lucrative cabal of frigid cat ladies known as People for the Ethical Treatment of Animals is condemning several common and beloved animal-related idiomatic expressions as hate speech.

It recently issued a series of tweets intended to “remove speciesism” from everyday discourse, because as everyone knows, animals are deeply offended by hate speech.

Instead of “beating a dead horse,” they insist you replace it with “feeding a fed horse.”

It would perhaps be inhumane to wish that many of the “animal partners” owned by PETA members would rise up and kill their masters, so we’ll simply say that we’ve never met an animal that was nearly this rabid.

Is it considered euthanasia to kill someone else in order to relieve your own pain?