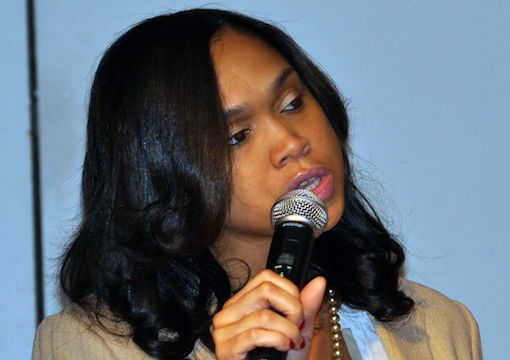 The Week’s Most Hibernal, Nocturnal, and Sempiternal Headlines

Last week, Marilyn Mosby, state’s attorney for Baltimore, was indicted on federal perjury and fraud charges. Mosby, a strong black woman, was especially strong when it came to bilking the system. She conned $100,000 in Covid relief money by falsely claiming “financial hardship” (her annual salary is $248,000), and she made false statements in mortgage applications for a $490,500 home and a $428,400 condo.

I’m gon’ lay down my burden,
Down by my riverside condo.

Mosby, who got where she is because of race, was helped to that position by Kamala Harris, who also got where she is because of race—half-black, half-Indian. And on the same day that black race-hustler Mosby was indicted, Indian race-hustler Charles Edwards pleaded guilty to federal fraud charges. Edwards had been Inspector General for Homeland Security under Obama (another race hustler), who appointed Edwards IG because who better than an Indian to investigate government waste? (Indians know all about “waste”…just look at any sidewalk in Mumbai.)

Turns out the pilfering Punjabi “used, possessed, and transferred stolen DHS-OIG and USPS-OIG documents and information to software developers in India.”

He also kept calling people claiming to be from Windows tech support.

The irony is, while Edwards was IG, he prosecuted a race-hustling Hispanic woman, Dawn Hamilton, for falsely claiming to be a small-business owner in order to receive benefits from the Small Business Administration’s Section 8(a) program, which throws cash at minority businesses like an NBA player at a strip club.

Rungs on a race-hustling ladder. Obama, Hamilton, Edwards, Harris, Mosby: each running their own game, each proving daily that diversity is our stench.

SAD SACKER
Naissus, 443 AD
The army of Attila the Hun relaxes in its encampment, the city thoroughly crushed.
Faint weeping is heard from Attila’s tent. Curious, one of his generals enters.

General: “What troubles you, my leader?”

Attila: “Why people gotta be so mean?”

Attila: “People bein’ mean to me for sacking they towns. They givin’ me dirty looks ’n’ yellin’ at me. They be sayin’ I’m makin’ mahself rich an’ takin’ they stuff, like I don’t care or nuthin’.”

General: “But sir, you don’t care. You’re a heartless warlord.”

Human callousness has never more vulgarly expressed itself throughout history than when selfish peons have shown hostility to ruthless pillagers without considering the feelings of those pillagers. Attila, Genghis, Timur…these were human beings. And shame on us for not taking that into account.

“Yes, that’s exactly how you teach critical thinking! Let the government decide what’s true and ban everything else.”

At least that’s how the L.A. Times sees it. Last week the paper ran a twelve-hankie portrait of BLM cofounder Patrisse Cullors, who is “healing” from having “PTSD” because the “little people” got angry at her after BLM sacked their cities while she nabbed multimillion-dollar book deals and splurged on fancy houses.

Yes, Cullors is claiming she got “PTSD” from those she gave PTSD (the people beaten and robbed by BLM, the families of those killed, and the store owners who lost their livelihoods).

According to the Times, the woebegone woke warlord “checked herself into treatment for post-traumatic stress disorder.” Cullors, the ultimate objectifier and attacker, told the Times she felt “objectified and attacked.” She explained that she couldn’t find a PTSD clinic that could treat her “racial trauma,” so she assembled a team of high-priced therapists and booked a country estate as her exclusive clinic.

Such a victim! Cullors should join Marilyn Mosby in a spiritual:

Swing low, golden chariot,
Comin’ for to carry me to my million-dollar home!

A MURDER OF CORNROWS
For its February cover, British Vogue hired the blackiest collection of African fashion models ever assembled. The dark-skinned lady noires posed next to each other, dressed in black, sporting the “noble woman-of-color face” that’s the template these days for all black female media photos.

Unfortunately, that love was not shared by “black Twitter,” where malcontents complained that the cover is “too black” and the lighting makes the girls look “too dark. “They put these models in terrible lighting, they dressed them all in black like a funeral,” one tweeter fumed.

“Why blacks gotta be so black?” might seem like an odd beef in the BLM age, but such complaints aren’t unique to blacks. Two weeks ago, Mercedes-Benz was pelted with criticism in China for an advertisement that used Chinese models with “slanted eyes.” Weibo users slammed the automaker for perpetuating “harmful stereotypes about Asians” by showing Asian women with Asian features.

At which point the highly rational Germans at Mercedes self-destructed like in that Star Trek episode where Kirk uses illogic to short-circuit some androids.

In response to the criticism, Chinese model Cai Niangniang (oh, a wise guy, eh?) told the Daily Mail, “Just because my eyes are small, I’m not good enough to be a Chinese person?”

Then she self-destructed as well.

It’s getting impossible to tell the difference between “racial pride” and “self-loathing.”

RETURN OF THE MACRON
The French always get things just a little…wrong. Like screaming “liberty, fraternity, and equality” during a “revolution” of terror and bloodshed.

Or declaring war on a more powerful nation in the name of liberating a nation they can’t possibly liberate, while trusting the British to stand by them in the aftermath.

“Sacré bleu, mes frères, why are you all heading to ze beach? Should we not be fighting ze Nazis?”

“Right…uh…well…we’re goin’ fer a dip we is we is. Just a right quick swim ’round the channel to ’arden the nerves, me old fruit, and then we’ll be back to ’elp you run off them bloody krauts.”

(The above was taken from the wartime diary of Charles de Gaullible.)

President Macron has decreed that in order to teach French children how to discern accurate information from untruths, to “educate our children with the critical ‘spirit of method,’” the government must ban all internet posts it considers “disinformation.”

Yes, that’s exactly how you teach critical thinking! Let the government decide what’s true and ban everything else.

Like how the best way to lose weight is to have someone else exercise for you.

Macron wants to prosecute social media posters for the crime of “diffusion by digital means of news which is known to be inexact and which damages others.”

Putting people in prison for being “inexact” will sure help teach those “critical thinking” skills!

Macron assured the media that these new speech regulations are in no way connected to the fact that he’s mere months away from an election in which he’ll be facing three rightist candidates, one of whom has already accrued several “hate speech” charges for daring to point out that violent Muslim immigrants are violent.

Macron insisted that he’s not attempting to use the new speech regs to silence his opposition. “This is France,” he told reporters. “When we want to silence opposition, we use a guillotine.”

He then laughed and added, “I’m kidding, of course. We just have our violent Muslims behead them.”

“POLITICS IS LITERALLY MURDERING ME”
Consider for a moment the mindset of the average Zoomer. Consider the world as they see it. Covid is killing young people by the score. Schools are unsafe. Three vaxxes and ten boosters will not protect you, even though you still need to get them because if you must die, die for science! Police shoot about a thousand unarmed people daily (2,000 in black areas), as Donald Trump mounts a Nazi army that will invade the Capitol (under the command of Obersturmbannführer DeathSantis), as Klansmen lynch the gender-fluid (a.k.a. every Zoomer) while climate change depletes the planet’s oxygen and people of color die agonizing deaths due to racism-rays emanating from old VHS tapes of 1990s stand-up comedy.

It should come as no surprise that young people who claim to be “news-savvy” are suffering debilitating health effects from the anxiety caused by their VR-nightmare America.

A new study from the University of Nebraska found that Democrat-leaning young people are experiencing “a serious toll on their physical health” due to their political beliefs. While the study found that this phenomenon is not confined to young liberals, that’s the group “most likely” to be literally murdered by their worldview.

Indeed, the study found that a large percentage of these face-tat fetuses have actually contemplated suicide because of politics. And why not? If you think death awaits you around every corner, via Covid, police, Trump, Nazis, KKK, racism, or global catastrophe, best to take the easy way out before you realize you’re trans and Dave Chappelle strangles you as you sleep.

The author of the study worries that if young liberals continue to suffer physically because of their politics, they might check out of the entire process: “If people view politics as so conflictual, and potentially a threat to their own well-being, they’ll say ‘heck with it, I don’t want to get involved.’”

It’s nice, for once, to end The Week on an optimistic note.