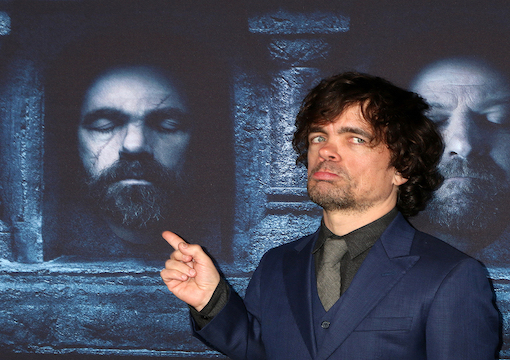 TERRORS OF TINY TOWN
Dwarf actors are kings of the self-own. You hire them, and they always find some way to screw it up. Suicide by gun (Hervé Villechaize, David Rappaport) or alcohol (Verne Troyer, Hank Nasiff), running their fool selves over with their own dwarfmobile (Jack Purvis), and even if they manage to avoid death and they get cast in a reboot of their most successful project, they’ll blow it by calling the director a “rapist murderer” (Mike Anderson).

And now the world’s most famous dwarf actor has decided to blow it for everyone else in his demographic. Peter Dinklage, the “handsome dwarf” (which is rather like saying that melanoma is the “least fatal cancer”; true, but it’s still cancer), has gone to war with Disney over the studio’s live-action remake of Snow White and the Seven Dwarfs. Dinklage claims it’s “insulting” to portray heroic dwarfs with well-defined personalities unconnected to their dwarfism.

Dinklage is urging Disney to either scrap the film, or make the dwarfs into trannies (Grumpy repeatedly screams, “Call me ma’am,” Doc lops off penises, and Bashful lacks the courage to expose himself to schoolgirls).

As it is, Disney’s been patting itself on the back for casting a mixed-race “Latina” as Snow White: Actress Rachel Zegler is of Polish and Colombian descent (how can you tell a Polish Colombian? At the airport he puts his shampoo bottle inside his bag of cocaine).

The studio announced last week that it’s attempting to address Dinklage’s complaints by “talking to the dwarf community” (there’s only one way to talk to dwarfs, and that’s “down”).

Dinklage’s griping has sparked a backlash from less successful dwarf actors, who’ve accused the Game of Thrones star of ruining their chance at a big-budget movie role. These actors see Dinklage as a man who got so famous, he forgot his roots, as he now gives other dwarf actors the high-hat.

Of course, to a dwarf, even a yarmulke is a high-hat, so it’s all a matter of perspective.

LIGHTEN UP, BROWNIE!
John Leguizamo isn’t a dwarf. At 5′ 6″ he manages to rise just above being a DeVito. And Leguizamo is an unreliable narrator regarding his ancestry, at various times describing himself as Puerto Rican, Mestizo, Colombian, Italian, Basque, and Lebanese.

Yes, Leguizamo is all things…except a watchable actor (his “breakout” 1997 film The Pest bombed at the box office and was pulled from theaters after one week; it currently holds an 8% approval rating on Rotten Tomatoes).

Knowing that he can’t carry a film, Leguizamo’s made a career out of being a supporting player in larger projects. And now, as a voice actor in the Disney hit Encanto, Leguizamo’s returned to being Colombian, giving a series of interviews claiming that if he didn’t look properly Latino before, it’s because he used to avoid exposure to the sun, as racist Hollywood producers had ordered him to “stay light-skinned.”

Leguizamo laments that throughout his career, he was told to never be “too Hispanic.”

Odd, then, that he got a boatload of money from Fox in 1995 to produce and star on the sketch comedy series House of Buggin’, which consisted of nothing but “cholo” humor. The show was so unpopular Fox pulled it in its first season.

Perhaps Leguizamo avoided the sun so as not to be seen in public by all the people who’d wasted time and money on his god-awful content.

Last week, Leguizamo may have taken his “poor brown child” routine one step too far. In an interview with Entertainment Weekly, he wept about being fired from the 2006 film Lonely Hearts because the director didn’t want a “Latin” in the lead role. However, the director, and others involved in the movie, strongly dispute that claim (director Todd Robinson told EW that Leguizamo was never even considered for the part).

If “sunlight is the best disinfectant,” it’s completely understandable why this slippery little mold spore tries to avoid it.

PREGNANT MEN AND CANCER COFFEE
Last week was a particularly good one for thee science.

Not science, as in, actual science. Last week was a crappy one for that.

“Perhaps Leguizamo avoided the sun so as not to be seen in public by all the people who’d wasted time and money on his god-awful content.”

But thee science, the leftist ersatz science (if science were a porterhouse, thee science is a soyburger), did quite well.

Apple released a new emoji for its iPhones depicting a “pregnant man,” because in thee science, men can get pregnant. Also, the pregnant-woman emoji was renamed “pregnant person,” to remind the world that men are the primary gestators of babies, and women are so incidental to the process, they don’t deserve to be mentioned by name.

Also last week, Sharon Stone, the marginally talented 1990s relic whose surprisingly decent turn in Casino is most notable for tricking Martin Scorsese into thinking he could repeat that success with Cameron Diaz, came out swinging against Joe Rogan, claiming that the Spotify mega-podcaster is an “idiot” who spews “medical misinformation” that “gets people killed.”

“I’m an infectious-disease worker who has won the Nobel Peace Summit Award for my work in infectious disease, Harvard Awards, Einstein Awards, you know these kinds of things,” Professor Crotchshot told TMZ.

This is the same Sharon Stone who announced at the National Press Club that she’d been diagnosed with terminal cancer, but when she gave up coffee, her tumors vanished overnight.

Yet she hates Joe Rogan for talking about Ivermectin.

She also told an audience at Cannes that the 2008 Sichuan earthquake, which killed over 87,000 people, was caused by “bad karma.”

It’s very possible that the “Einstein Award” she brags about was intended sarcastically, as in, “nice job, Einstein.”

METAWORSE
With Facebook’s launch of its “Metaverse” virtual reality universe, Mark Zuckerberg surely expected to have a great 2022.

It’s not turning out that way.

When the U.K.’s Nina Patel created her avatar and entered the Metaverse, she was only looking for a bud-bud-buddy. Instead she discovered that her Poona is far from untouchable. Ms. Patel claims that her avatar was virtually molested by other avatars (ctrl+shift, then alt+tab+PERV to activate “Weinstein mode” in the Metaverse).

Ms. Patel penned a Medium piece in which she described the horror of being “virtually gang-raped” by male avatars. And although nothing actually happened to her in real life, Patel whined, “My physiological and psychological response was as though it happened in reality.”

Odd how gamers can get killed a hundred times a day playing first-person shooters and nobody ever cries about being “dead in reality.”

Still, Patel is virtual-bloodied but virtual-unbowed: “I am a determined woman, not about to be deterred by 3–4 avatars to scare or intimidate me.”

To hell with firefighters and paramedics: Nina Patel’s the real hero, as she stands up to enemies that literally don’t exist.

Oh, and Patel also runs a rival VR company. Not that this would give her any motivation to slam Zuckerberg’s creation.

Besides, Zuck doesn’t need any slamming from her to feel slammed. Since introducing Metaverse, his company’s earnings have plummeted, its stocks plunging 20%. This disastrous turn of events is blamed on FB’s “news feed” losing traffic.

Who’d have thought? Ban news links from all but the most antiseptic left-wing sources, and people stop paying attention to their feed. Nobody could’ve foreseen that.

Poor Zuck. Looks like his avatars aren’t the only thing being reamed these days.

QUEER EYE FOR THE AGE-EIGHT GUY
When illegals cross the border by the thousands, NBC is AWOL. When nonwhites commit horrific crimes, NBC is out to lunch. If you call NBC to ask about a school-board cover-up of a tranny who raped a girl in a school restroom, NBC will pretend to be the maid: “NBC no esta aqui señor.”

But if a random conservative parent in a state with a population of almost 30 million files a complaint about a book in a school library, NBC is there, with mics, fedoras marked “press,” and a copy of the Constitution to wag at the evil “censors.”

NBC presented the story like a scoop (and also like a story about censorship, even though it’s about 86 requests, not actual removals). Most of the (not) banned books deal with underage sex. One is about “a teenager who’s starting to notice his attraction to other boys.” Another contains “a graphic sexual experience between minors.” Yet another features “a description of oral sex with minors, among other sexually explicit passages.” And another is “about a 17-year-old gay student who has a lot of sex and isn’t ashamed of it.”

NBC is shocked—shocked—that parents might object to any of this. Certainly, if there were a book about a female avatar getting groped in the Metaverse, it would have to go. But these books? It’s almost like parents think teachers want to corrupt their kids.