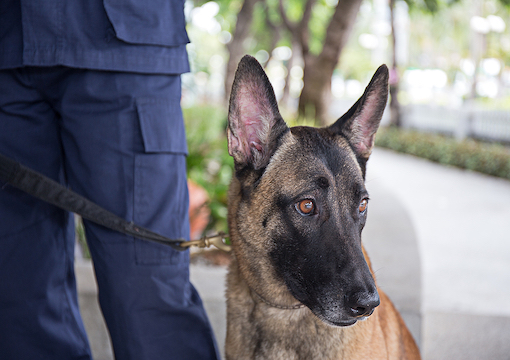 The Week’s Most Raving, Enslaving, and Daylight-Saving Headlines

HARMADUKE
A world run by dogs wouldn’t be so bad, especially considering the mess humans have made of things. Dog World would be very close to utopia. Belly rubs would replace money, love and loyalty given would always be returned in kind, and work would be meticulously balanced with play.

Oh, and criminals would be scalped instead of coddled.

Poor Talmika Bates. All she wanted to do was shoplift a few reparations from a high-end beauty-supply store. Sadly, it takes a lot of cosmetics to make Talmika Bates look passable to the human eye. So when the 26-year-old targeted Ultra Beauty in Brentwood, Calif. (near the Bay Area, right in the path of where Oakland’s raiders maraud every night), she brought along a BIG satchel.

Bates and two friends ended up making off with over $10,000 in merchandise.

Unfortunately, the beauty-challenged thieves found themselves tailed by cops, so they ditched their getaway vehicle and took to the hills. A police K9 named Marco found Bates hiding in some bushes, and when the German shepherd barked at her, and Bates replied, “Oh I know you dih-in’t just bark at me!” the dog retorted by grabbing her by the hair.

In his defense, he assumed it was a weave. It wasn’t, and Talmika lost part of her scalp.

Last week, Bates announced that she’s suing the city of Brentwood for “injuries, depression, and trauma,” telling the local press, “My whole brain almost fell out. I don’t even feel cute. I feel ugly.”

Well, she could always rob a beauty supp….oh, right.

As for Marco, he’s being floated as a replacement for L.A. County DA George Gascon. And he just might win, especially with California’s maul-in ballots.

STABR
Dating’s never been easier, thanks to dozens of apps designed to bring loved-starved young people together for a lifetime of happiness.

Or a night of gruesome geopolitical revenge.

Well, no app is perfect.

A Nevada man looking for love in all the wrong faces was bafflingly delighted when a 21-year-old woman named Nika Nikoubin responded to his ad on Plenty of Fish. With eyebrows that can be seen from space and a face that makes passersby think they’re in a Tootsie reboot, Nikoubin doesn’t exactly seem the type to set a man’s heart afire.

But she sure can rip a man’s jugular asunder, as the Nevada man discovered when his experience with Plenty of Fish resulted in the loss of plenty of flesh.

“The heroes of the California Department of Scaring the Living Crap Out of Babies cited the investigated schools for improperly allowing children to breathe too much.”

Turns out Nikoubin was fishing not for love but victims. The mannish Persian scare-quotes “beauty” wanted to get revenge for the assassination of Iranian military leader Qasem Soleimani, killed in a U.S. drone strike in 2020. Following Soleimani’s death, Iranian “Supreme Leader” Ayatollah Khamenei declared that his friend’s murder would be met with “harsh retaliation.”

In a world of dirty bombs, anthrax, and sarin, it’s not entirely certain if “setting up a random guy on a really bad date” qualifies as “harsh retaliation.”

Nikoubin took her prey to a Las Vegas hotel, where she plied him with liquor and had sex with him before plunging a knife through his neck.

Though injured, the man was able to push Nikoubin away, chasing her out of the room and calling 911. He survived his grisly injury, and, on the plus side, he did get laid, so was it really that bad a date after all?

Nikoubin is being held in a Henderson jail. And Ayatollah Khamenei had to explain to his mullahs why “Operation Bimbarossa” failed.

Unbowed, Khamenei vowed that his next assassin would be sent through Grindr, though he fears that some of the potential victims might actually enjoy the experience.

AMERICA RUNS FROM DUNKIN’
Last week, the Columbus police officer who, a year ago, shot and killed 16-year-old land-dwelling whale Ma’Khia Bryant was cleared of all charges by a grand jury. The cop, Nicholas Reardon, had been forced to shoot Bryant as she was about to kill another young girl, Shai-Onta Craig-Watkins. Reardon’s bullets stopped the murder-in-progress. Yet BLM and its political patrons demanded a witch hunt, claiming that Reardon should’ve gently delivered a Mr. Spock neck pinch to nonviolently subdue the raging beast who had Craig-Watkins pinned to a car with a knife at her throat.

At the hearing, Reardon pointed out that Mr. Spock isn’t real, and Bryant didn’t just outweigh him, but the car as well.

Ironically, as BLMers were decrying the Reardon decision, they were cheering the slap-on-the-wrist given to a 27-year-old black man for beating a 77-year-old white guy to death for saying the “N-word.”

Corey Pujols is the jive-talkin’ manager of a Tampa Dunkin’ Donuts. Vonelle Cook was a crusty old whitey who didn’t like his doughnuts (“Hang-darnit, I said the one with the sprinkles, not the jelly, you black bastard”). On TV, these two could’ve been the new Chico and the Man. But instead they became Africo and the Dead Man. When the irate Cook used the “N-word” while berating Pujols for his poor doughnut handling, the young manager punched the old honky square in the face, killing him, because that tends to happen when you punch a 77-year-old square in the face.

Last week a judge sentenced Pujols to a sweetheart deal of house arrest and community service, and not a soul in the black community suggested that a fit, healthy young man could’ve handled an irate but unarmed elderly man with less-deadly force.

Only cops are expected to be Spock. Fit young black men facing off against elderly white dudes are allowed all the lethal force they want.

Also, apparently in Florida you can now legally murder someone for saying “nigger.” Note to Quentin Tarantino: Shoot your next film elsewhere.

HOT (CAULDRON) FOR TEACHER
America’s teachers really seem to enjoy tormenting their charges. Forcing masks on toddlers, making kids (even vaxxed ones) eat outdoors in the cold and rain, and encircling desks with plexiglass walls.

But now the kids are scoring some payback, tormenting their instructors with ever-changing demands to be called different pronouns, and reporting them to administrators when they fail the they/them/zhir/zhem test.

Usually, the teachers cater to their little gender chameleons, because the only thing teachers like more than scrambling kids’ minds on race is scrambling them on gender. But for one middle school teacher, Pamela Ricard of Fort Riley, Kansas, the daily barrage of “call me ma’ams” during roll call became too much to bear.

Ricard, a devout Christian who doesn’t believe that kids can switch sex via willpower (i.e., she’s rational), decided to stop using gender pronouns at all after being ordered by her superiors to never call a sir a ma’am or a zur a zam or a flim a flam.

But a student complained, demanding that Ricard be forced to (in menacingly intoned Walter White voice) “say my name.”

Hey, it’s not like Ricard’s a missionary being boiled alive by cannibals. They’ll let her out of the pot as long as she surrenders her convictions.

But Ricard’s not bending; she’s hired a lawyer, claiming that the school is forcing her to adopt an unwanted belief system, thus violating her First Amendment rights.

Admins have suspended and reprimanded her, because if there’s one location where notions of “conscience” and “rights” have no place, it’s American schools.

It’s easy to feel anger toward the kids, but to be fair, several years of oxygen deprivation from masks coupled with nutritionally questionable cookies and cupcakes couldn’t have been good for their brain development.

SMOTHER AND CHILD
Sticking with a theme, last week officials with the California Department of Social Services raided three San Diego preschools to grill the toddlers on their mask habits and whether or not their school was keeping them properly smothered.

The tykes were separated and interrogated solitarily with no parent or guardian present.

No way that was a terrorizing experience!

Following the grilling sessions (“Vee haff vays off making you talk. Grape juice, perhaps?”), the heroes of the California Department of Scaring the Living Crap Out of Babies cited the investigated schools for improperly allowing children to breathe too much (Covid kids will surely eventually come to be known as “Generation RainMan”).

To close the week by bringing things full circle, it should be noted that the last time Southern California child-services stormtroopers raided schools and interviewed small children with no guardians present, the state got the McMartin Trial, the defining 1980s example of moral panic and false testimony.

And the exact same institute that launched that witch hunt by berating and intimidating kids into saying they were molested, Children’s Institute Inc. (CII), is today one of the main suppliers to SoCal schools of—guess what—masks! On its website, CII brags about flooding schools with “18,440 face masks, 47,184 ounces of hand sanitizer, 192,600 individual disinfecting wipes, 58,900 rubber gloves, and 5,110 face shields.”

Apparently, terrorizing children is like eating potato chips; once you start, it’s really hard to stop.