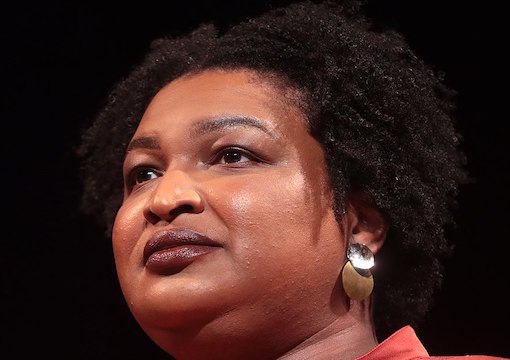 The Week’s Most Shaking, Baking, and Spring-Breaking Headlines

STAR TREK: THE NEXT DEFECATION
Sci-fi has a long history of calling things wrong. Blade Runner predicted a 2019 L.A. with no Mexicans except Edward James Olmos. Back to the Future Part II predicted hoverboards in 2015. And 2001: A Space Odyssey envisioned that year as being all about white guys piloting spaceships rather than Muslims piloting hijacked planes.

But one thing sci-fi got right was America having a black president. From 1997’s Fifth Element to 1998’s Deep Impact and 2006’s Idiocracy, sci-fi saw it coming.

So why stop at president?

An October 1986 episode of the Twilight Zone reboot penned by Game of Thrones scribe George R.R. Martin depicted a black college bimbo who’s informed by time travelers that one day she’ll be “president of Earth” (see the episode here. The roommate is played by model-actress Cindy Harrell, the girl from the Ghostbusters music video. After this episode, Harrell fled the business, marrying a wealthy Jewish philanthropist so she’d never have to act again. Among shiksa model-actresses this is known as a “Goldenberg parachute”).

So even back in 1986, prominent sci-fi authors were predicting a black female “president of Earth.”

Last week the Paramount+ TV series Star Trek: Discovery cast Stacey Abrams as the future “president of Earth.” Yes, that Stacey Abrams, the one who’s had this conversation about a thousand times:

“Ms. Abrams, your printer must’ve run out of ink. Your résumé is just your name and race, but no jobs or accomplishments.”

Star Trek: Discovery is set in the year 2255, and even then Abrams is still claiming to be governor of Georgia. But while conservatives have balked at the show’s fawning, there might be accuracy to the portrayal. Should there ever be a “president of Earth,” it would almost certainly be an empty vessel rendered untouchable by race and gender. It’s highly doubtful anyone with substance and principles could get the support of all earthly nations.

Congrats, sci-fi. This one seems on-the-nose.

LENTILMEN PREFER BLONDES
Blonde “economist” Teresa Ghilarducci knows all about poverty. Not from ever having experienced it, of course. But she saw it once on TV.

Ghilarducci, of the leftist Economic Policy Institute (founded by Robert Reich as a shell company to siphon money from the Lollipop Guild pension fund), is personally bankrolled by the Alfred Sloan Foundation, the U.S. Department of Labor, the Ford Foundation, and the Rockefeller Foundation.

So of course Bloomberg News chose her to write a guidebook to help ordinary Americans cope during a time of out-of-control inflation.

Her primer was initially comprised of just one sentence: “Like errmahgerd, if you need money just get funded by the Alfred Sloan Foundation, the U.S. Department of Labor, the Ford Foundation, and the Rockefeller Foundation.”

But Michael Bloomberg asked her to flesh it out a bit, so she reworked the piece, adding a few practical tips to help the peons survive the Biden bust: Take the bus and eat lentils.

And there you have it, Mr. and Mrs. America. Your financial problems are over. “Now may be the time to sell your car,” John Retard Keynes told her readers, “it’s worth reconsidering public transportation.”

“Star Trek: Discovery is set in the year 2255, and even then Abrams is still claiming to be governor of Georgia.”

And since you’ll need energy to keep doing your filthy poor-person jobs, forget meat—that’s for the elites. Your future is beans and lentils:

Tasty meat substitutes include vegetables (where prices are up a little over 4%, or lentils and beans, which are up about 9%). Plan to cut out the middle creature and consume plants directly. It’s a more efficient, healthier and cheaper way to get calories.

So spoke Teresa Ghilarducci as she ate caviar from Mike Bloomberg’s naked ass as his yacht spirited them to his private island, far away from the filthy commoners who are only poor because they won’t eat their veggies.

KORNERED BY KAMALA
Kamala Harris is that person who corners you at a party. You try to get away, you try to make an excuse: “I need to use the restroom” or “I’m gonna go get a refill.” But your words don’t register. She just keeps talking.

And she won’t stop laughing at her own “jokes.” Worse, she leans in after every “funny” quip, insisting that you laugh along.

The first rule of comedy is that if you have to prod someone to laugh, your joke flopped.

And the first rule of public speaking is that you have to do more than string random words together.

Last week Harris was in Louisiana promoting high-speed internet, something even an AT&T Punjabi peasant working in a phone bank for a dollar a day can effectively do. And yet she still managed to screw it up. Peppering her remarks with her trademark “Right? Right?” the vapid veep explained:

Yes, America has as its VP the only Indian who couldn’t pull off a Windows phone scam.

“Hello, sir, I’m from Microsoft security and I’m calling to discuss with you the passage of time, right? Time is significant and it passes. Right? Right?”

A billion Indians, and we got Hamstrunga Din.

TRAN-AND-CHEESE SANDWICH
Alabama’s favorite black tranny Quentin Bell looks like Nell Carter if Nell Carter had been 500 times uglier. Gazing at Quentin Bell, now a man but born a woman, one is compelled to accept the appropriateness of his transition. Because trying to imagine this freak show as a female is frightening.

According to the Houston Chronicle, Bell is the Martin Luther King of trans men. He travels his state battling bills that dare to declare that women exist.

And when Bell lectures legislators about tranny acceptance, he uses what the Chronicle admiringly dubs his “sandwich analogy.” Bell quizzes the lawmakers on their favorite type of sandwich, and then he explains that a sandwich can be anything: “Sandwich,” like gender, is a social construct. He uses the example of a peanut butter sandwich. It’s not bound by bigoted definitions. It could be whatever you want to call it.

Last year a female patient at a British hospital was raped, but the hospital denied the crime because only “women” were present in the “single-sex ward.” For an entire year, the hospital gaslighted the victim and stymied the police investigation. “All our patients in this ward are Philly cheesesteaks. It’s not possible that someone was violently penetrated by a peanut butter sandwich.”

Last week the hospital finally admitted that yes, one of the patients in the ward was a tranny with a penis, and yes, he raped the woman.

In a restaurant, if you order a Philly cheesesteak and you get a peanut butter sandwich, you can send it back. In real life, if you’re admitted to a female-only hospital ward and you get raped by a dude, you just gotta swallow it and pay the bill.

Quentin “Martin Luther Dong” Bell’s sandwich analogy might not be as helpful as he thinks.

SPRING BREAK-DANCERS
Speaking of Martin Luther King, who can forget his impassioned speech about how the only way that America can finally achieve true racial equality is if black kids get to go to Miami for spring break and shoot up the town with impunity?

Okay, MLK may never have delivered such a speech. But try telling that to the young justice warriors in Miami right now protesting a curfew imposed by the city because “black spring breakers” won’t stop shooting each other.

Last week, Miami city leaders imposed the curfew after a wave of violence by revelers who were merely celebrating Biden’s historic nomination of a black woman for SCOTUS.

Pierre Rutledge, chair of the Miami-Dade Black Advisory Board, told the Miami Herald that the curfew is just as bad—maybe worse—than the segregationist oppressions of early-1930s Florida. Rutledge told the Herald that in 1936 his grandma had to carry an ID card just to walk along the beach. And today, young black men are being prevented by a racist curfew from murdering each other on that same beach.

“If you don’t know your history, you’re destined to repeat it,” Rutledge wept. “And it looks like that’s where we’re headed.”

There’s no difference between 1930s race-based ID cards and a present-day non-race-based curfew enacted to stop an epidemic of blacks shooting blacks.

Apparently, Rutledge is also chair of the Miami-Dade Drooling Idiots Advisory Board.

One black spring breaker told the Herald that just because her friends were shooting each other doesn’t mean they should be hit with a curfew.

“The curfew makes it seem like we’re the problem.”

Especially when the real culprit is probably Putin.

Laugh if you will; that’ll likely be MSNBC’s headline tomorrow.