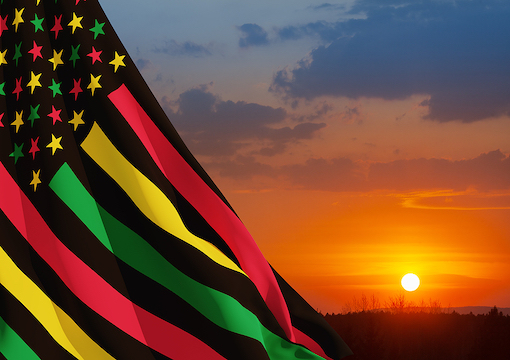 The Week’s Most Eeny, Meeny, and Juneteeny Headlines

31 FLAVORS A SLAVE
Juneteenth, a Texas-originated celebration marking the end of slavery, had traditionally been a regional, minor jubilee. But in June 2020 craven government officials needed figurative pork rinds to toss the ravenous BLM rioters laying waste to American cities, so it was decided to elevate Juneteenth to a federal holiday in George Floyd’s honor (“National Fentanyl Day” having already been claimed by Prince).

This year Juneteenth falls on Father’s Day, so every black child will have at least something to celebrate.

Unfortunately, darkness has descended upon the black festivities. Commercialism has reared its ugly head: Walmart had planned to market Juneteenth ice cream to commemorate the holiday. Thankfully, black activists and social media users bullied the mega-chain into pulling and destroying the product.

When Walmart execs couldn’t figure out how to quickly dispose of millions of gallons of ice cream, Stacey Abrams bravely stepped in to finally make herself useful.

To be fair to the lactose-intolerant activists, some of the Juneteenth flavors Walmart was planning to sell might’ve come off as a little crass. They included Emancipralines, Underground Rockyroad, Rum Raisin in the Sun, Mangonumission, Diaspumoni, Coffle Cognac, Maple Passage, Macamaroon, Tutti Strange Frutti, Flantation, Cotton Pickin’ Candy, and Uncle Tom’s Carob.

All available with whipped cream, of course.

“The ADL never complains,” McMillon said, “as long as they get a cut.”

But how do you up the “ewwww” factor to celebrate something that’s nothing but “ewwww”? You already have Pride parades where dudes in S&M bondage outfits wave their penises at children, and “drag queen storytime” at public libraries in which grotesque abominations from a John Waters wet dream read about vaginas to petrified tykes who’ll forever associate books with fat freaks in wigs who smell of burned cheese and lubricant.

How do you top that? You make millions of Americans associate dinner with poop.

The ads list foods that can “cause a traffic jam in the digestive system, which can make a mess of your evening.” To put it in family-friendly terms, these are foods to avoid so that when you’re in bed with Jed Clampett and he goes shootin’ in your hole, he doesn’t unleash a bubblin’ crude.

Remember the good old days when rule No. 1 of food advertising was “Don’t associate the product with turds”? It’s the only reason Tootsie Roll has stayed in business so long.

Last week The Hill ran a lengthy piece about the increase in “anti-gay hate” this Pride Month. Left unexplored was how much of that “hate” is just people who were about to eat a nutty fudge bar, and then they saw a Postmates ad.

There’s a fine line between being “homophobic” and merely nauseous.

ACHIEVING ACHIEVER ACHIEVES ACHIEVEMENT
Cancer’s good as cured, and Mars good as conquered. The press was abuzz last week with news that 17-year-old Floridian Ashley Adirika, a child of Nigerian immigrants, was accepted for admission by all eight Ivy League universities.

Anyone perusing the many glowing profiles of Ms. Adirika looking for information about GPAs, SATs, or ACTs would’ve been sorely disappointed, because Ashley was chosen not for her grades but for her many accomplishments, which include being a student of color, being born a person of color and then becoming a student, possessing color while being a student, and being physically present in a learning institution for students as a student while encased in skin of color.

In high school, Adirika founded a group called Our Story Our Worth (“a community organization that empowers young female students of color”). She also served on her school’s debate team and as student body president. Other accomplishments include being a student, and being of color.

And the debate team. There was that, too.

Adirika has chosen Harvard as her destination. Regarding her major, she told CNN that her ultimate goal is “to fix issues in communities with the knowledge of government systems and policies” via “explorations in policy and social policy and things of that nature,” adding, “I am really passionate about policy and using policy to empower communities. I want to use that as a platform to do work in policy.”

“When Walmart execs couldn’t figure out how to quickly dispose of millions of gallons of ice cream, Stacey Abrams bravely stepped in to finally make herself useful.”

Meanwhile, across town, an Asian-American teen with a 4.0 GPA, perfect SAT scores, and an internship at a nuclear power plant where he single-handedly innovated a new reactor design was handed his rejection slip from every U.S. college:

“Dear Quan, your application essay didn’t use the word ‘policy’ nearly enough. In the future, please keep your goals vague, and try to say ‘policy’ multiple times per sentence. Also, be more of color, but not your color; the other, better color. Best of luck to you in your uncle’s restaurant; with the dumplings, go easy on the vinegar.”

“YOU DEMONS GET OFF MY LAWN!”
When you think of the societal damage wrought by Covid, what comes to mind? Economic disaster? A ravaged job market? Elderly people left to die alone?

Children deprived of education and formative-years socialization skills? The health effects of 24/7 masking?

Or maybe you think of the suicide and opioid overdose rates.

Well, then, you’re a damn fool. Because Covid’s worst legacy is demons.

Yes, demons. Last week the Catholic Church opened its first-ever center to combat Covid-related demon possession. The St. Michael Centre for Spiritual Liberation and Exorcism, located in Manila, is equipped to zap the demons out of ten normal-size adults per day (or twelve dwarfs). The local archdiocese told the Daily Mail that the “mental, emotional, spiritual, and physical stress caused by the pandemic made for a perfect storm for possessions and demonic intervention.”

Thanks to Covid, demons are not only possessing people, but annoying them as well:

Chief exorcist Father Jose Syquia says “full possession” only accounts for 20 per cent of all exorcisms, with the majority being performed on people who are being “harassed physically” by the evil spirits.

Such “physical harassment” includes demons giving out wedgies, wet willies, and the “you got a spot on your shirt” nose-flicking thing.

Thankfully, in a heartwarming display of interfaith unity, St. Michael’s has partnered with a Hindu call center in Bangalore to offer Windows security assistance for demon-possessed gadgets. Just give the Indians your password, social security number, and banking info, and those demons will be cast right out.

As for exorcising the malware that’ll be left behind, the Church can’t help with that. But you might find a few enterprising Asian kids who didn’t say “policy” enough to get into college who’ll do a secular exorcism of your hard drive for a nominal fee.

IF ANDREW CUOMO WERE AN ELEPHANT…
Speaking of Indians…

They say you should never meet your heroes.

To Hindus, the elephant is a sacred being, the living incarnation of Ganesha, the god of wisdom, success, luck, and postmortem elder abuse.

Last week, 70-year-old Maya Murmu was collecting water outside her village of Raipal, Eastern India, when she came across an elephant wandering through the forest.

A sign of good fortune, surely, to have a random encounter with such a holy being. What wisdom would this magical beast convey to a humble, aged water-gatherer?

Absolutely none. The elephant trampled Murmu like a kiddush cup at a Jewish wedding.

The next evening, Murmu’s loved ones prepared a pyre to send Maflatma Murmu to the hereafter in the proper Hindu tradition. Murmu’s body, decked out in ceremonial dress and draped in flowers, was lovingly placed upon the woodpile, as mourners solemnly recited ritualistic prayers, in a scene of serenity and dignity.

And then the elephant came back and kicked the livin’ crap out of the corpse. According to the Daily Mail, the exact same elephant crashed the funeral, “took Murmu’s body down (from the pyre), trampled her again, threw her around and went off into the night.”

“I know he’s supposed to be a god and everything,” Murmu’s daughter told the Mail, “but man, that elephant’s a dick.”

Indian authorities revealed that the elephant had traveled 200km from the Dalma Wildlife Sanctuary in Jharkhand just to kill Murmu and beat the snot out of her body at the funeral, which led one wildlife official to remark, “That elephant must’ve really hated that old bat.”

They say elephants never forget, and apparently they also hold irrational grudges. The presence of animals that’ll murder your loved ones and come back to bust up the funeral like Don Ciccio in Godfather II sheds a little more light on why Indians are so desperate to immigrate to America.

When you’ve dealt with elephants that travel 200km just to kill your grandma and abuse her corpse for the sadistic fun of it, subway muggers don’t seem so bad in comparison.