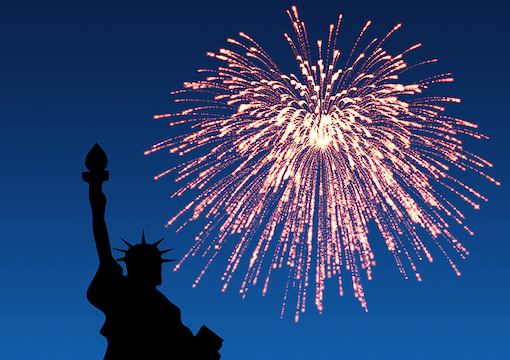 The Week’s Most Sniping, Griping, and Stars-and-Striping Headlines

MORE THAN A WOMB ’UN
The womb is back, and wetter than ever. After years of stern lectures from leftists about how “woman” is a social construct and biological “parts” are irrelevant to gender, the end of Roe has made “parts” the comeback story of the year.

Last week, Cher (who, due to decades of plastic surgery, is no longer technically male or female but a synthetic compound of rubber, metal, polyethylene, silicone, and ShamWows) tweeted (all words capitalized, like a reverse e.e. cummings):

If Every time Men Had Sex, They Risked Death, Physical Disability, A Life Altering Interruption In Their Education, Or Career, & The Sudden Life Long Responsibility For Another Human Being, I Think They’d Expect A Choice In The Matter

So even e.e. dumbings admits that what makes a woman a woman is the ability to conceive (or at least ownership of the necessary parts).

Needless to say, Cher was attacked by gypsies, trans, and thieves, but she remained unbowed: Parts make the woman.

Of course, Cher could afford to have a spine of iron, considering that she literally has a spine made of iron. But some of her younger “feminist” allies folded pretty quick. Like Gina Darling, the Vietnamese-American internet irritant whose résumé is all scare quotes (“gamer,” “influencer,” “talented,” “deserving” of “fame”). Darling, the kind of VC who makes William Calley want to suit up again, tweeted “If men were able to get pregnant, this would’ve never been up for discussion fuck this backward ass shit.” However, after being schooled in how men totally can get pregnant, the Chi Minh ho apologized: “Oh wait. Pardon my wording, not sure what the proper wording is for this but I guess…people born with male reproductive organs? If that’s not correct, pls educate me. Sorry if that came off as transphobic.”

Yes, parts are back. But there’s still some confusion as to where they fit.

Mboku: “Nigeria may not be paradise, but at least I have a roof over my head.”

[Massive cracking sound from above]

As Americans worry about the bottom falling out of the housing market, Nigerians worry about falling tops. Forget the housing bubble; we’re talkin’ housing rubble. Africa’s most populous nation (216 million people. To put that figure in perspective, that’s almost half the number of genders claimed by Ezra Miller) has a building problem. In that, its architects can’t build.

Structures in Nigeria keep falling down. One hundred and sixty-seven, according to records kept by a U.N. researcher unironically named Habeeb. All over the country, buildings are going down faster than Kamala Harris when she meets a man who can help her career. Hundreds have been killed and more than 6,000 households displaced (residential structures account for 78 percent of the collapses), to the tune of $3.2 trillion in losses.

Now do you see why those Nigerian princes need your help?

Human error in construction is the most common reason for the collapses; turns out, compasses, levels, and T-squares are more helpful to architects than the blessing of a broom-god coated with goat dung. As Nigeria’s population skyrockets, the nation’s landlords have a bad habit of adding floors to buildings without permits, safety inspections, or brick, mortar, and steel.

Habeeb concludes that Nigeria’s housing BOOM can only be fixed by overcoming the endemic corruption and incompetence that led to it.

In other words, it can’t be fixed.

Mboku: “Oh well, at least as I live on my debris heap, I know things can’t get worse.”

NEED A LYFT? CALL HINDUBER!
Maybe what Nigeria needs is Mexicans. After all, even Mexicans can hammer nails (“Even Mexicans can do it” is the universal standard for pointing out incompetence). Sure, Nigeria is far from Juarez, but now that Biden’s thrown open the border, Mexicans are learning that proximity ain’t all it’s cracked up to be.

“The end of Roe has made ‘parts’ the comeback story of the year.”

Last week, authorities in San Antonio came across an abandoned tractor-trailer containing the corpses of 46 Mexican migrants. The frijoles refritos had been left in 103-degree temperatures by smugglers; police claimed the bodies were “hot to the touch” when found.

Maybe a nice boat ride to Lagos ain’t such a bad idea in comparison.

Biden refused to take responsibility for “the Mexican food truck that overcooked some tacos.” When his advisers corrected him that it was actually a Mexican dude truck that overcooked some Pacos, Biden waved them off, as he had an important meeting with dissident anti-Putin military officials (it was actually just Hunter’s Russian whores, but nobody had the heart to tell him).

While Mexicans are baking like tortillas as they try to enter the U.S. illegally, up north, Indians are demonstrating how to gate-crash in style.

A 48-year-old Punjabi named Pal Singh was arrested by the feds for running a human-smuggling scam involving a network of Ubers. Pal Punjoey would have one of his drivers pick up an illegal in Canada (the preferred landing point for Indians, who are drawn to Justin Trudeau’s “retarded monkey” Hindu dancing) and chauffeur him across the border, where he’d be transferred to another Uber, then another, so that by the time the invader reached his target city (sometimes California, sometimes the Midwest), there’d be no traceable line from the border to the destination. The Ubers were connected by a network of burner phones.

Convoluted? Sure. But these are people who worship twenty-armed elephant-lobsters with fifty ears and snakes for legs. They’re used to convoluted.

Singh charged $11,500 per trip, and worst of all, he’d give you a one-star passenger rating if you didn’t tip.

Still, none of his illegals were roasted to death in 103-degree temps. $11,500 is a lot of money, but it beats becoming human tandoori.

Take last week, when VP McCackles was asked by CNN for her opinion on the death of Roe v. Wade.

You know, I’ve thought about it as, you know, a parent, and as an aunt of preschool children. As a woman myself. And a daughter of a woman. And a granddaughter of a woman. Everybody has something at risk on this. First of all, if you are the parent of sons. Do think about what this means for the life of your son.

It’s still a more soundly reasoned argument than the one Blackmun used for Roe itself.

The odd thing is, Harris had no reason to be vague about abortion. It wasn’t like she was asked about inflation or the border or any of the things about which Democrats can only stammer. The Dem party line on abortion is carved in stone; all she had to do was recite it.

For her, speaking without speaking isn’t about evasion. It’s all she’s capable of.

Kamala Harris: the greatest American orator since Webster (not Daniel, but Emmanuel Lewis).

LITTLE GIRL (BLACK AND) BLUE
It’s a common sight gag in American comedies: An adult beats up kids and feels proud. Kramer and the karate class, Adam Sandler creaming kids in dodgeball in Billy Madison, Will Ferrell beating up child bullies in Step Brothers, Will Ferrell punching a baby in The Campaign (Ferrell recycling a gag? No!), Melissa McCarthy beating up Girl Scouts in The Boss, and the Always Sunny in Philadelphia gang plagiarizing the bit from Step Brothers.

It’s only funny ’cause it’s fiction. In real life, an adult taking pleasure in decimating a child isn’t funny…it’s psychotic.

So meet a psycho: Richard Batres is a Guatemalan tranny, father of three, and former U.S. Navy petty officer (after deciding to become a woman, Batres earned the new rank of rear admiral lower-half).

Now known as “Ricci Tres,” Batres spends his time destroying the hopes and dreams of little girls by beating them in female skateboarding competitions.

Last week, the 29-year-old Batres, who refuses to “transition” hormonally because he claims morphing into a woman is about “decisions and feelings,” not physicality, demolished 13-year-old Shiloh Catori in the girls’ division of the Boardr skateboard championship in NYC. Afterward, he did a victory lap in the press, bragging about how he swiped a trophy and prize money from a child.

In defeat, young Shiloh praised Batres’ “courage” (because it takes a great deal of bravery for a grown man to physically dominate a kid). Batres’ Guatemalan father, however, reacted to his son’s campaign of child cruelty by angrily telling him in Spanish, “I need you to go fuck yourself.”

And with that, on this Fourth of July, a Guatemalan speaks for all Americans.