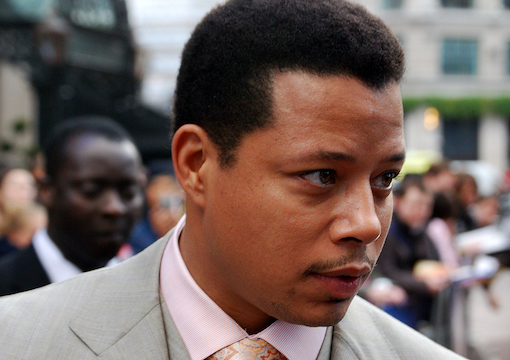 The Week’s Most Blighted, Delighted, and United Headlines

“NOW I AM BECOME METH”
It’s easy to laugh at vapid Hollywood celebrities. Sometimes we laugh so hard we forget the many amazing scientific advancements gifted to the world by Tinseltown’s finest.

John Landis proved that when an unstoppable force meets an immovable object, the former prevails as long as the latter is a has-been actor carrying two Vietnamese kids. By opening a Beverly Hills bathroom stall, George Michael solved the riddle of Blowdinger’s Cat. And science now knows that two vehicles traveling toward each other at the same velocity will never pass as long as one of the drivers is Matthew Broderick.

We can now add to that esteemed list of Weinstein’s Einsteins the name Terrence Howard.

Howard is best known for roles in films like Crash, Mr. Holland’s Opus, and Red Tails (he has a “pretentious and overrated” clause in his contract), as well as Big Momma’s House and Glitter (the clause also says “crappy”). A convicted spousal abuser and admitted hardcore druggie, Howard most recently starred on the TV show Empire alongside Jussie Smollett.

And when Smollett invented weatherproof invisible MAGAs, Howard, who claims to hold a PhD in chemical engineering from South Carolina State (even though he never attended the school, which offers no such degree) and who runs a website dedicated to proving 1×1=2, had to step up his game.

Last week Howard gave a lecture in Uganda at the invitation of the nation’s Minister of Agriculture (a corn husk with googly eyes). Addressing a crowd of Ebola-scarred witch doctors, Howard declared that he’d “identified the grand unified field equation, and put it into geometry” in order to “develop a new hydrogen technology” to “defend the sovereignty of Uganda” because “one times one equals two.”

He was immediately made Uganda’s Minister of Self-Esteem.

“Look, there aren’t a lot of people in the world who make us feel smart by comparison,” a Ugandan observer remarked. “Now that we’ve found one, no way we’re letting him go.”

POO-NITED NATIONS
The United Nations can do things only one way: wrong. The worst human rights offenders are put in charge of the human rights council. Nations where women can’t leave home without an escort lead “gender equality” commissions.

They did; it was them.

And now, U.N. leaders have revealed themselves as fecal fetishists.

Yes, the U.N. is obsessed with your poop.

Catarina de Albuquerque sounds like a New Mexico drag queen. But in fact she’s the U.N.’s “sanitation czarina.” And last week she penned an op-ed for the L.A. Times in which she castigated Americans for not allowing the homeless to defecate wherever they please.

According to Scatarina, “penalties for public urination and defecation” are “Jim Crow” for the homeless. Public pooing is the civil rights movement of the age, except this time Rosa Parks doesn’t sit; she squats.

Excrete-ary General Albuquerque states that without being able to dump on sidewalks, “the homeless are blocked from full participation in public life” (to be fair, the Declaration of Independence did originally read “life, liberty, and the pursuit of crappiness”).

Penalties for public pooing “promote marginalization”; Albuquerque claims that the U.S. should be more like Mumbai regarding public defecation.

If American cities don’t start easing up on street-soilers, Albuquerque warns, the U.N. might have to take action: Garrisons of fece-keepers are lining up to deploy for World War Number 2.

U.N.WELCOME GUESTS
If the U.N. seems preoccupied with the bathroom habits of Americans, it’s likely because fighting for the right of America’s Emmett Kellys to emit smellies is an easy task compared with the battles the U.N. is facing in less civilized environs.

Fifteen people, including three U.N. workers, were murdered last week in eastern Congo after what the AP described as a “social media-fueled protest” over U.N. tweets (the U.N. was warned not to post that “Virgin Bantu vs. Chad Babinga” meme). The day after the multiple-fatality protest, a new protest was launched to protest the deaths from the previous one.

During this protest, a gang of trigger-happy Tekes fired their rifles in the air to frighten U.N. workers holed up in their HQ. The bullets brought down a power line, setting four of the Yosemite Savages on fire.

The bad news? They burned to death. The good news? A four-way tie in the annual Congolese Richard Pryor impression contest.

Also last week, in Mali, where 275 U.N. peacekeepers have been slaughtered by warlords, government officials expelled the entire U.N. mission over “tendentious and unacceptable” Twitter posts.

As the meeting convened, Guterres told the attendees, “Please tell me no one here has any problem with our tweets.”

To which the Peruvian delegate replied, “For Christ’s sake, you’re still posting the Jackie Chan WTF meme? I mean, it’s so played.”

“Anyone else?” asked Guterres.

Every delegate raised their hand.

“Maybe we oughta switch to Instagram,” Guterres thought to himself as he sank back in his seat.

GETTING SOME FRESH AIR (STRIKE)
When there’s a target on your head, it’s best to be unpredictable. Yasser Arafat, for example, never slept in the same bed twice. He said it was to throw off assassins, but those who washed his sheets claimed it was for a more embarrassing reason (let’s just say the dude could “Amber Heard” a bed like a sonofabitch).

Last week, U.S. forces assassinated al-Qaeda leader Al-Zawahiri. President Biden had actually put the hit on Al Zweibel for writing the 1994 Rob Reiner flop North, but Ron Klain realized it would be better PR for the administration to kill Al-Zawahiri instead.

With the U.S. out of Afghanistan, how do you locate a cagey kafir in a nation of 40 million Muslims? A real Nidal in a haj-stack situation.

Except Al-Zawahiri had a fatal flaw, an Achilles hilāl.

No joke; according to Politico, “The terrorist leader’s habit of standing on his balcony allowed the U.S. to observe him and confirm his identity.”

Every morning, like clockwork, Al-Zawahiri would emerge from his bedroom onto his balcony and take in the sights and sounds of another fine day in Kabul, the sun rising over the majestic mountains as the local gentry sodomize their beasts of burden before morning tea.

“I love the smell of neigh-pum in the morning,” Al-Zawahri would remark to his significant other (a goat named Habibi).

Last week, however, Al-Zawahiri had a balcony experience so violent even James Earl Ray would’ve gone “damn.” As he stepped outside for some fresh air, two drone-fired Hellfire missiles made his fatwa go splatwa.

Following the operation, the White House tried to do a victory lap. Unfortunately, President Biden, battling his tenth relapse of Covid and goofy on boosters, had come to believe he’d taken out Al Zamora, the popular tejano musician.

“We can’t let word of this get out,” he told his aides. “I’m losing Hispanic support as it is.”

FAPPUCCINO (WITH CREAM)
Oh, that Soros! The Hungarian billionaire and James Bond villain is so dedicated to his vision of genocide-by-criminal that he’s lost sight of the true victims of his crime-spree-by-proxy.

No, not murder, mugging, or rape victims. Not the kids shot by unprosecuted gangbangers or the merchants beaten by decarcerated thieves.

The real victims of Soros’ “progressive prosecution” are coffee-loving gays.

Last week the megalomaniacal Magyar penned an op-ed in The Wall Street Journal in which he defiantly declared that even after several recent setbacks (the successful recall of San Francisco’s Chesa Boudin and the upcoming recall of L.A.’s George Gascon), nothing would stop his crusade to install bought-and-paid-for soft-on-crime district attorneys in every city in America.

Nothing? Not even the agonized cries of a city of sissies deprived of their beefcake baristas?

The same day Soros’ op-ed appeared in the WSJ, over in West Hollywood, the city’s legendary “Big Gay Starbucks” closed for good, driven out of business by robberies, vandalism, and in-store disruptions by the homeless and mentally ill.

In other words, driven out of business by the Soros crime wave.

The Los Angeles Blade, L.A.’s gay newspaper of record (“All the nudes that fists imprint”), ran an emotional farewell to the BGS, reporter Paulo Murillo reminiscing wistfully of how he would “gawk at the men passing by in spandex short shorts and spaghetti tank tops on their way to the gym” as he sipped his latte. “It was a place for cruising before hookup apps like SCRUFF and Grindr. Guys would do their seductive dances while nursing a cup of joe. Then one guy would get up and the other guy would follow him to the restroom by the pool area of the Ramada Inn a few doors down.”

Look what Soros has taken from you.

ABC News interviewed a forlorn former customer who suggested a way the store could’ve remained open while keeping employees safe from crime: “During the pandemic, they had service through the door—you just come and pick your stuff up, so they could’ve easily done that. I don’t see why they needed to shut it down.”

“Through the door”? In other words, turn the coffee shop into a glory hole.

Isn’t that the gay solution to everything?