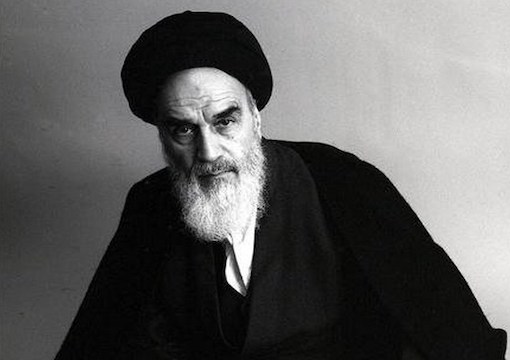 The Week’s Most Slicken, Wiccan, and Drought-Stricken Headlines

When he enjoyed a book, like Diary of Anne Frank (he loved the happy ending), he’d award it two severed thumbs up. But when he hated a book, he’d put a death warrant—a fatwa—on the author’s head. Prominent literary recipients of fatwas include Waldo for being so maddeningly elusive, and Mumbai-born Salman Rushdie for disrespecting Islam in a book so dense and incomprehensible it proved the “reverse infinite monkeys theorem” (“one pretentious Cambridge-educated Kashmiri striking keys on a typewriter will eventually produce the work of a million monkeys”).

Khomeini slapped Salman with the fatwa back in February 1989, just four months before fate delivered some tit-for-tatwa and knocked Khomeini flatwa with a heart attack that made his arteries go splatwa. Since then, carrying out the death warrant has proved a bridge too Farsi for a generation of Iranians who’ve realized that Twitter has rendered murder irrelevant; if you want to destroy an author, just label them transphobic.

But in a testament to the power of U.S. open borders to give the children of immigrants a chance to excel beyond their ancestors, last week Hadi Matar, 24-year-old son of Lebanese huddled-massers, did what no foreign Muslim had been able to do: He stabbed the hell out of Salman Rushdie as the author was giving a talk in Chautauqua (ironically, the talk was titled “Never Let Your Guard Down”).

Handmi Mascimitar slashed the author a dozen times before being restrained by other attendees. Thankfully, Rushdie survived. Not thankfully, trannies across the nation realized that to stay competitive they now have to step up their anti-free-speech game.

At a press conference following the Rushdie assault, transgender spiritual leader Ayatollah Shemaili (he/shiite) placed a fatwa on the head of J.K. Rowling, before berating a misgendering reporter, “It’s Ima’am! Call me Ima’am!”

OUT OF THEIR COTTON-PICKIN’ MINDS
Laurel Elementary School in West Hollywood was tanking. Although the city is 78 percent non-Hispanic white, Laurel’s student body was 51 percent Hispanic. Meaning that the school had the lowest test scores in the district but the best-trimmed lawns and hedges.

Still…those test scores, way below the state average (which is rock-bottom as it is) in math and reading. Sure, the admins at Laurel could’ve done the unthinkable and taught the Hispanic kids English, but that would’ve been racist. So instead, the Laurel brain(less) trust blamed the school’s 29 percent non-Hispanic whites; their “racism” was driving down the scores.

It was decided that the only way for scores to improve would be if the white students were made to suffer like black slaves. Officials planted cotton in the school’s garden and forced the white kids to pick it.

If you prayed for that last sentence to be a joke, your prayers have gone unanswered. And while the “cotton lesson” was no gag, there is an ironic punchline: One of the school’s few black students is now claiming she got PTSD from watching the white kids pick cotton. The girl’s mom, Rashunda Pitts (the daughter’s name was not released, but one hopes it’s LaBreatar), is suing the school for emotionally wrecking her child.

Pitts is suing for $10 million and a lifetime guarantee that McDonald’s never gives her them cold fries.

The cotton-picking exercise meant to racially sensitize whites instead has the school facing a potentially bankrupting lawsuit from a black.

No good deed goes unpunished. Sometimes that goes for retarded deeds, too.

Over the summer, the school district liquidated Laurel Elementary. It reopened this month as a specialty school for “cinematic arts.” Classes now include “Boy Actors for Stage and Screen” taught by Bryan Singer.

Now there’s something that West Hollywood residents can cotton to.

LITTLE PEOPLE, BIG NUISANCE
A football icon pushed around by a midget.

And not just any football icon, but a Texan.

What is the world coming to?

Last week, Dallas Cowboys owner Jerry Jones was reminiscing about his team’s scouting director Larry Lacewell when he jokingly referred to his late friend by the “m-word.”

At least that’s how the media reported it, leaving puzzled readers to speculate about the word in question.

“Twitter has rendered murder irrelevant; if you want to destroy an author, just label them transphobic.”

National advocacy group Little People of America (a.k.a. NAACPeeWee, or ADLevator Shoes) issued a stern rebuke: “Any use of this disparaging slur along with suggestions or insinuations that our stature exists for amusement is deplorable and inexcusable.”

LPA was founded in 1957 by midget actor Billy Barty, who made millions by literally using his stature for amusement. In fact, LPA was initially known as Midgets of America (no joke). If “midget” really is the equivalent of the N-word, that’s like the NAACP originally being called “National Association of Niggas.”

Ironically, Midgets of America became LPA because the group’s dwarf majority didn’t like the midget minority getting all the glory. Fun fact: the word “midget” was popularized by P.T. Barnum to separate “attractive and proportioned” little people from big-headed stubby-legged freaks. Midgets could work the center ring, while dwarfs were relegated to the sideshows. So “midget” used to be the elite term, until those bitter envious misshapen dwarfs demanded “equity.”

Dwarfs were engaging in a “woke war” sixty years ago! That would be a fascinating fact if anyone gave a crap about dwarfs.

The “dwarf/midget” history is retold in this 2005 exchange between Seinfeld actor Danny Woodburn (Kramer’s dwarf buddy) and legendarily woke film critic Roger Ebert. Be prepared to laugh and cringe at how many times both men say “nigger” in trying to prove how enlightened they are.

The good news is, he cleared the posts, easy. The bad news? He’s yet to land.

THE GRANDSON GRIMM
American colleges and universities are often dismissed by conservatives as useless degree factories indoctrinating young people with pointless knowledge that won’t help them in the real world.

Well, a recent Justice Department press release paints a different picture. Indeed, it demonstrates that even a lowly community college can equip a young person with exactly the skills they need to prosper financially.

In 2011, 22-year-old Douglas Senerth of Windsor, Conn., took a class at Manchester Community College called “Memoir and Monologue.” The class aimed to teach young people how to incorporate “effective storytelling” into “personal monologues” so they can use “imagination and individual and collective myths” to become “authors of their future.”

In other words, learn storytelling to better your life.

Which Senerth did, graduating with full “personal storyteller” honors in 2013 (he was even featured on the “Manchester success stories” website).

Using his newly learned skills, Senerth proceeded to bilk $690,000 from his grandparents by telling them wild lies about his life. The tall tales ranged from needing money to go to an Ivy League school (which he never planned to do), to needing even more money to launch a business venture with his professor (who didn’t exist).

For almost a decade, Senerth squeezed gammy and gampa with new monologues every time he needed cash. His scam came to a halt when he spun a tale about needing $30,000 to travel to a nation called Wakanda where super-genius Africans reinvent physics.

Even his gullible grans couldn’t buy that one.

Senerth faced twenty years in the joint, but U.S. District Judge Robert Chatigny, an Obama appointee who once tried to free a serial child rapist-murderer because “sexual sadism” is a “mitigating disability,” gave him eighteen months. With time served, he’ll be out by Thanksgiving.

Fortunately, Senerth won’t be another unemployed ex-con; he already has a job waiting for him as Biden’s next press secretary.

INFIDELFLUENCERS
Remember the good old days when social media “challenges” involved buckets of ice water? Today, TikTokers have upped the ante with the “blackout challenge” (self-inflicted oxygen deprivation), the “skull-breaker challenge” (give your friend a concussion), and the “Benadryl challenge” (“overdose for likes and shares!”).

And the newest TikTok fad puts the others to shame: Get ready for the “get raped by savages challenge”!

When Arabela Arpi, a 21-year-old Duke University travel blog “influencer,” read a 2021 survey in which 80 percent of Pakistanis said women aren’t safe in their country, she took it as a dare. She decided to visit the most crime-ridden, Muslim militant parts of Pakistan to see if she gets raped.

Arpi journeyed to Pakistan’s lawless Dera Ghazi Khan (which translates to “The Rape-Me State”) to prove that a nubile young woman can visit rural Pakistan without being sexually assaulted by Islamic thugs.

And of course she was immediately sexually assaulted by Islamic thugs.

Ironically, her gang-rapists recorded the assault and uploaded it to their influencer channel on QuranicTok.

Yes, that’s the worst thing it did. It “disrupted a narrative.”

Looks like the people at VICE have been doing the blackout challenge a little too much.